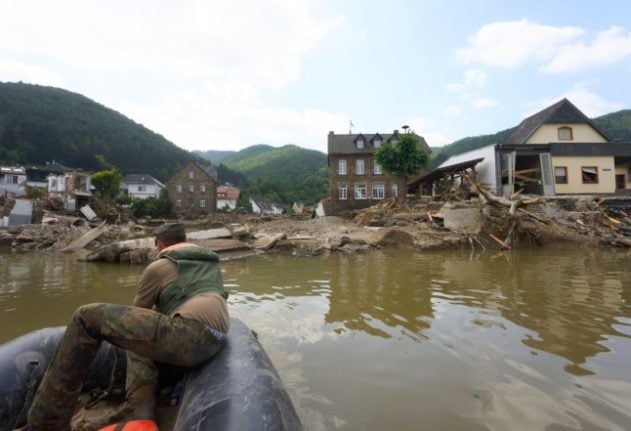 A week after floods hit western regions claiming the lives of more than 170 people and destroying towns and infrastructure, German authorities are facing tough questions over disaster warning system.

Critics say the government did not do enough to warn residents about the floods despite being alerted on July 10th to the possibility of catastrophic weather by the European flood service EFAS.

Germany’s civil protection and disaster management system is mainly controlled at the state and district level. But the flood disaster has exposed blind spots.

On the subject of flood warnings, Schuster added that “incredibly many” people played a role in the reporting chain.

“My office has a lot of expertise and little jurisdiction. We only push the warning button in the event of war,” Schuster emphasised, referring to the fact that the federal government is only responsible for civil protection in the event of defence. “Otherwise, we make our system available to the states and municipalities and they use it. That works, too.”

The question now is how to improve the warning system, he said. Schuster mentioned introducing more sirens and digital warnings that would be sent out to everyone affected via text message – so-called ‘cell broadcasting’.

Local authorities can use sirens, loudspeaker announcements or radio and TV bulletins to warn residents of acute danger or issue evacuation orders.

For digital alerts, Germany relies on various mobile phone apps – such as NINA and Katwarn – to warn or inform people about important incidents, disasters and dangerous situations, as well as severe weather. But people have to download the apps to be warned.

Schuster said Germany’s Interior Minister Horst Seehofer (CSU) has decided that warnings will be directly sent to residents in future via cell broadcasting.

“The issue of sirens, cell broadcasting, is guaranteed to have an impact in the next two or three years,” Schuster said.

Germany has so far chosen not to base its widespread digital emergency alerts on this SMS system, unlike other countries such as the Netherlands, Greece, Romania, Italy, or the USA.

“I am in favour of having these push messages reach citizens via mobile phone providers as well,” the CSU politician told Bild. “But that has always failed because the political will has been lacking in some places.”

READ ALSO: Why weren’t all residents of Germany’s flood zones alerted via text?

The disaster has also raised questions over how large a role the federal government should play in extreme weather situations. The central government only steps in when the district or state declares a state of emergency.

However, Interior Minister Seehofer pushed back against this idea, saying local knowledge is needed.

“It would be completely inconceivable for such a catastrophe to be managed centrally from any one place,” he said. “You need local knowledge.”

German opposition parties have also called for Seehofer to resign due to alleged failings in the country’s disaster response.

Michael Theurer, deputy parliamentary chairman of the centrist Free Democratic Party (FDP), said the events “paint a picture of a considerable system failure for which the Federal Minister of the Interior Seehofer bears direct personal responsibility”.

The disaster has also put climate change at the top of the agenda in Germany ahead of the elections on September 26th.