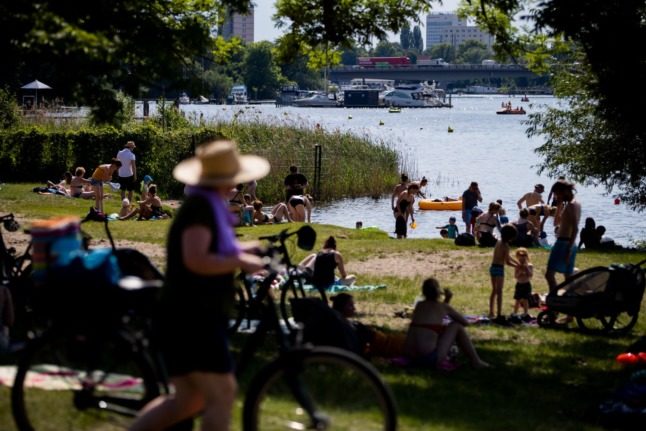 Is trendy city living really out of fashion?

Perhaps. After months of being cooked up in flats and public life shut down due to Covid restrictions, a new study shows a growing number of people in Germany want to move to the suburbs or the commuter belt – known as the Speckgürtel (literally translated as the bacon belt or fat belt) in German.

A total of 13 percent of city dwellers would like to get out of the sprawling urban jungle within the next year, a joint analysis by the ifo Institute and real estate firm immowelt found.

“The corona pandemic has made many Germans rethink their housing situation,” said the firms. “More living space and access to nature are suddenly more in demand than lively city life in trendy neighbourhoods.”

But the representative study of 18,000 people showed that although many German residents want to change their living situation soon, they do not want to go without urban infrastructure altogether – signalling that the Speckgürtel is becoming ever more desirable.

Respondents showed that smaller cities and suburbs are particularly sought-after. These could be the likes of Potsdam near Berlin, Wiesbaden near Frankfurt or Ingolstadt near Munich and Nuremberg, but suburbs include smaller communities on the edge of cities with good travel links.

So despite the growing number of people looking for a higher quality of life outside the cities, there are no signs of a mass exodus to the country just yet.

READ ALSO: Where rents are rising (and falling) in Germany

But the ifo Institute and immowelt said their results “have implications for municipal infrastructure planning, for example in the areas of mobility and education”.

They say that better connections between suburban to urban areas “and an expansion of the educational infrastructure in suburban areas and in smaller metropolitan areas will grow in importance”.

More space, lower rents and house prices, plus access to the great outdoors: life in the countryside or suburbs has a number of advantages over densely-packed urban areas.

And after workplaces were forced to bring in more flexible working agreements in the pandemic, people have been able to move from central areas without having long daily commutes.

The study shows that urban centres – cities with more than 500,000 residents – are clearly losing their appeal for some people.

READ ALSO: Are Germans really fleeing the city for an idyllic life in the countryside?

Age has a noticeable influence on who wants to get out to the country or suburbs. Of those aged 18 to 29, 18 percent plan on giving up their city residence in the next 12 months.

Those who have children in the household are also more likely to think about their living conditions. Only 10 percent of childfree city dwellers plan to move out of the city within the next 12 months.

But for those with one child, the figure rises to 18 percent, and for parents with two or more children it doubles to 22 percent. Young people starting families are also increasingly planning to leave the urban area.

A survey the Local reported on in February showed that almost 30 percent of young professionals would consider moving to the countryside if they could stay in home office once the pandemic is over.

The experiences and consequences of the Covid pandemic shaped the decision-making process for lots of people. Germany had tough contact restrictions in place for months in 2020 and 2021, meaning people spent a lot of time indoors unable to meet with others, go to a restaurant or enjoy culture – the usual big draws for city living.

READ ALSO: How many people in Germany commute to another federal state for work?

Those who want to move in the short or medium term said the Covid crisis was a massive factor: almost every second respondent who wants to change their housing situation within the next 12 months said that the pandemic had an influence on the decision, said the study.

For those with a longer-term relocation plan, the pandemic plays a less significant role.

What are the other big reasons for moving?

For the people who want to turn their back on city life (at least for now) the main reasons are to get a larger apartment or living space, and the chance to have their own garden.

Almost two-thirds of the city dwellers surveyed said they wanted to be closer to the great outdoors, and to improve their living conditions.

Other frequently cited reasons were disruptive factors at their current home (58 percent), the desire for more living space (57 percent) and a better environment for the family (56 percent).

Nature – yes, but with urban infrastructure

Despite all of this, there are no signs of a major urban exodus in Germany. In fact most city dwellers are not looking for a secluded spot in the countryside.

Those planning a short or long-term move away from the big city would prefer to move to a smaller city (38 percent) on the Speckgürtel. A further 30 percent want to stay in the suburbs.

Only 11 percent of the city dwellers surveyed plan to move to the countryside.

Suburban areas and cities with between 100,000 and 500,000 residents are therefore increasingly attracting the attention of the urban population.

These areas can offer a better living situation due to them being less densely packed with housing, but at the same time offer the advantages of an urban infrastructure and quick access to urban centres.

Forced to move house 20 times in the past eight years, Maria’s situation was desperate. She and her daughter had arrived in Stockholm from Latin America in search of a better life. She found work, no problem – but housing was impossible.

“Sometimes I was paying 12,000kr in rent and it was very hard because I only had 15,000kr in monthly salary,” says Maria (not her real name). So she took a high-interest loan of 240,000kr and tried to bribe someone in the Housing Agency to get to the front of the queue for affordable housing.

But she was caught. Her fate is unknown. And she didn’t even get an apartment.

This recent story, in the excellent newspaper of the Tenants’ Association, sums up the problems facing people who move here to work. The market for rental accommodation is tight as a drum. Finding a home means competing with Swedes, but with all the disadvantages of being an outsider. So people find themselves pushed into short-term, insecure rental contracts at inflated prices.

It wasn’t supposed to be this way. Five years ago this month, the government announced a “historic investment in housing”, including subsidies for construction companies, easing restrictions on building permits, and making more land available.

The housing situation at the time was grim. Spotify had threatened to leave Sweden if things didn’t improve – how could the company attract skilled young people to a city where there was nowhere for them to live? More than half Stockholm’s population – 600,000 people – were in the queue for a coveted rental apartment, because strict regulation meant these rents were low. But it took as long as 20 years to get to the front of that queue.

The result was a thriving rental property black market, with large bribes changing hands. Many tenants exploited the situation by sub-letting their homes, or parts of them. “It is almost impossible for immigrants and new arrivals to penetrate this market – it is all about who you know and how much money you have,” said Billy McCormac, head of the Fastighetsägarna property association, in 2015.

So what has been the outcome of the grand promises the government made five years ago? House-building at the time was already rising steadily, and it has continued to do so. Look around you in the big cities and you will see that new apartment blocks have sprung up here and there.

But we shouldn’t go only on appearances. To understand the reality, we need to look at some numbers.

The gap between demand for housing and the existing housing stock has indeed started to shrink. “As housing construction has gradually increased and population growth has begun to slow down, the gap has decreased since 2017,” Stockholm’s Housing Agency noted in December.

The Agency has broken records four years in a row for the number of rental homes it has provided. The proportion of young adults living independently has also increased somewhat, the Tenants’ Association found, probably due to the pace of construction.

But this smidgen of good news is outweighed by an avalanche of bad.

The average queuing time in 2021 for a Stockholm apartment was more than 9 years; for somewhere in the city centre you have to wait 18 years. Only 936 homes came with a waiting time of less than one year. More than three-quarters of a million people are now registered in the queue for housing – a big increase on five years ago.

The rate at which the housing shortage is shrinking is nowhere near fast enough to alleviate the huge accumulated demand.

Assuming that the current pace of construction can be maintained, it will be the end of this decade before any significant dent is made in the deficit of homes, according to Boverket – the Swedish National Board of Housing, Building and Planning. The current rate of construction is “only marginally more than the long-term need”, it says.

The challenge is even greater when it comes to producing affordable housing, Boverket says, especially for the young and those entering the housing market for the first time. Almost one in four young Swedes up to the age of 27 are forced to live at home – the second-highest figure since the measurements began.

There are already signs that housing construction is actually slowing down, owing to higher building material prices, rising interest rates and an incipient labour shortage. Construction prices rose by more than 8 percent last year, and there is concern in the industry that war in Ukraine will further affect costs, in turn slowing the pace of building.

There is another fly in the ointment, a consequence of the collapse of Sweden’s governing coalition in November. The new, minority administration was forced to adopt the opposition’s budget, which halted investment subsidies for house building, throwing the construction industry into confusion.

In short, the “Swedish model” for providing people with a roof over their heads is failing. The folkhemmet, or “people’s home”, has not enough homes for its people.

Swedes themselves understand this: in a survey last month, nine out of ten voters said they thought that politicians did not take the housing shortage seriously.

We have waited too long. It is time for fresh thinking and radical action to solve the housing crisis.

David Crouch is the author of Almost Perfekt: How Sweden Works and What Can We Learn From It. He is a freelance journalist and a lecturer in journalism at Gothenburg University