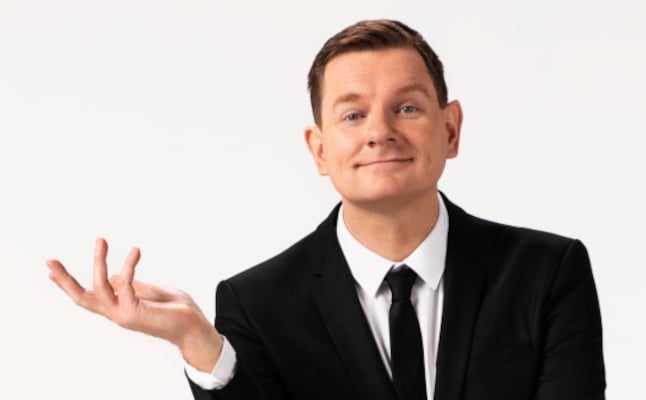 The past year has seen many cultural events cancelled and postponed due to the Covid-19 pandemic, which for many performers have meant postponing tour dates.

For Pitcher, who was just preparing to embark on an arena tour when the pandemic came, this was an opportunity to keep working on material.

“I think it’s really important to laugh, I think it’s massively important. But in the chain of things it feels quite low down on the ladder,” Pitcher tells The Local from his home over Zoom.

He continued to perform through company gigs, which most often were done digitally. Pitcher’s various experiences in digital performing include everything from beginning a performance to find out that the audience are in the other room on a coffee break, to a viewer’s cat attacking the camera, which he described as “the ultimate heckle”.

“I’ve done shows where people are in the forest or something – they are just walking with their phones. Just stay still Gunilla!” Pitcher says.

He also reflects on the value of a live audience in deciding what is funny and what isn’t. While initially seeing this time as a perfect opportunity to test out new material, the lack of live reactions made it difficult to gauge its success.

“Some of these companies don’t put their cameras on so I have done 30-minute shows to a black computer screen. And everybody is muted. I think that is the first sign of insanity.”

Being an international resident in Sweden during the pandemic has for many meant seeing a stark contrast in approaches to battle Covid. Sweden has been the focus of much international attention due to the decision not to have a strict lockdown, although social distancing and work-from-home recommendations, as well as some legally enforced rules for businesses such as shops and restaurants, were in place.

New Zealand, where Pitcher grew up, took a different approach with heavier restrictions, and has seen very low infection rates.

“It was a bit like when the New Zealand rugby team wins the world cup, people congratulate me or act like I played a part in it. And that was the whole thing with New Zealand’s response to covid. I think it was Jacinda who sorted it out,” Pitcher says about New Zealand Prime Minister Jacinda Ardern.

As vaccines are rolling out in Sweden, Pitcher is hopeful that the new dates for his Happy Place Tour will be honoured. After first releasing tickets in December 2019, the tour is now expected to begin in April 2022.

When he first wrote it, Pitcher wanted the tour to be a message that the world is not as bad as it seems, something he likens to a novel by Hans Rosling, a Swedish academic who was commonly described as an optimist. His posthumous book Factfulness explores “why things are better than you think”.

“The place where we live should be our happy place. And then a pandemic happened,” Pitcher says.

He therefore spent much of his time last year rewriting and thinking up new material, while preparing to return to the live stage.

“I just think it’s going to be really exciting to walk up to a room and hopefully they are applauding, because during this whole thing, every room that I’ve been to in my house, my family has not been applauding.”

Al Pitcher has two specials on Netflix: Fy Fan Sverige! (2019) and Sverige Syndrome (2021). His Happy Place Tour is set to happen in the spring of 2022. More information about Al Pitcher can be found on his website.