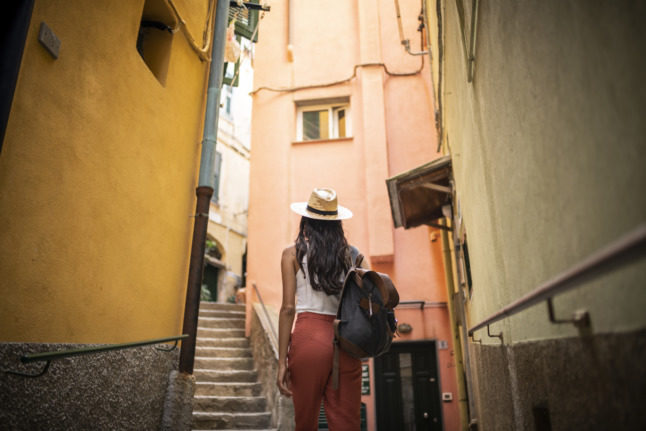 The Local, in partnership with McArthurGlen Designer Outlets, gives you four top tips for making the most of your Italian summer in 2021.

If you feel you’ve been missing out on fully exploring your adopted homeland, you’re hardly alone. But with all of Italy now in low restriction ‘white zones’, your opportunities for interesting ways to spend your free time are increasing.

If you’re longing for an authentic Italian experience away from the crowds, why not head to one of the huge number of ancient villages (or borghi) you can find in regions such as Veneto, Tuscany, Piedmont, Lazio and Campania?

In Monferrato, an area of hills, valleys and vineyards in Piedmont, you can truly escape, whether you prefer wine-tastings, truffle hunting or just a relaxing walk through a charming village such as Gavi or the small city of Novi Ligure, which Genoese nobles inhabited for centuries. In northern Tuscany, close to Florence, the Mugello is an enchanting region, crossed by the Sieve River, where you’ll find renaissance villas, castles and picturesque comunes ideal for exploring on foot.

Afterwards, you may feel ready to rejoin the 21st century with a visit to one of the five McArthurGlen Designer Outlets across Italy, including the Barberino Designer Outlet – through which the Sieve also passes.

2. Make the most of Italy’s outdoor food festivals

One of the greatest joys of living in Italy is the food – and another is a summer of festivals and cultural events. At this time of year, you can combine both by attending a sagra (or some sagre if you fancy more than one!)

Sagre are outdoor food festivals where you can delight in Italy’s varied culinary traditions by feasting on local, seasonal ingredients served up in delicious traditional recipes. They thrive in rural areas, including many villages and medieval hamlets.

Music festivals are also a vibrant part of the summer in much of Italy, as are giostre. These Medieval re-enactments really bring history to life through colourful costumes, flag wavers, drummers, and even jousting. Many festivals and events in regions such as Veneto, Tuscany, Piedmont, Lazio and Campania are beginning again as restrictions ease – watch out for announcements.

Reader offer: get a free aperitif and an extra 10 percent off outlet prices at any McArthurGlen Designer Outlet in Italy

3. Enjoy a return to outdoor shopping (and a taste of luxury)

In Italy, it’s not only the buildings that wow you with their style; there’s also the effortless elegance of Italian fashion. The country is renowned for the excellence of its craftsmanship in many areas, none more so than tailoring.

If you’ve felt starved of opportunities to see and try on new clothes recently, now could be the time to indulge yourself a little. What’s more you can make a day of it in attractive open-air surroundings at any of the five McArthurGlen Designer Outlets in Italy.

You’ll find hundreds of leading Italian and international brands such as Ermenegildo Zegna, Armani, Salvatore Ferragamo, Fendi, Karl Lagerfeld, Michael Kors, and Dolce & Gabbana – along with plenty of opportunities to feel the luxurious touch of exclusive silks and cottons in your hands. Your surroundings may also remind you of some of the architectural highlights mentioned above. Each centre reflects the local architecture, so you can enjoy wide avenues, spacious squares, and bubbling fountains.

It’s a far cry from another drab mall – the environment invites you to stroll at your own pace, just as you might in one of those Italian borghi. You can also enjoy genuine Italian food packed with flavour and nutrition – and worthy of a street food festival – at numerous restaurants.

The summer sales are now on at each centre, meaning you can save even more than you would with usual outlet prices. You can also take advantage of extended opening hours during the sale period.

Each outlet is also served by regular shuttle buses from the nearest city (check for more details before travelling), as well as free wifi, free parking, and children’s play areas. All centres have received the Bureau Veritas SafeGuard Covid-19 certification as a result of the health and safety measures in place.

Being stuck indoors due to the pandemic may have meant missing out on much more than the country’s natural beauty. What about Italy’s endless unique architectural gems? If you’re considering a day trip, a weekend away or even a longer break, you could factor in a visit to one of Italy’s many marvellous buildings and archaeological sites.

If you’re going anywhere near Rome, the sight of the Colosseum or a visit to the Vatican is still sure to stir your soul, no matter how many times you’ve seen either. Further north, go off the beaten track as you explore the region around Milan to see the utterly majestic Certosa di Pavia monastery, which dates back to 1396. In the northeast, look beyond Venice to discover Aquileia. This ancient city and archaeological treasure was one of the richest and biggest Mediterranean cities within the Roman Empire. Destroyed by Attila the Hun in 452, it later became a major hub of the Christian world.

In the south, a short drive from Naples, you can feast your eyes on the spectacular Reggia di Caserta – a former royal palace, which is the largest royal residence in the world by volume.

Make the most of your summer: get a free aperitif and an extra 10 percent off outlet prices at any McArthurGlen Designer Outlet in Italy as a reader of The Local

I’ve never been a great fan of sophisticated dishes, twisted recipes and extravagant concoctions that leave you wondering what is it you’re actually eating. T-bone steak with melted dark chocolate as topping, burrata cheese with apples, spaghetti with blueberry sauce aren’t my thing.

Hence, I never eat at Michelin-starred restaurants, and it’s not because of the exorbitant bill – paying €200 for a salad simply because it was grown in the private garden of a chef which he personally sprinkles with mountain water each morning, is a bit over the top.

I just don’t think such fancy food has anything to do with the real Italian tradition.

The ‘nouvelle cuisine’, as the name suggests, was invented in France by chef Paul Bocuse. And it’s ‘nouvelle’ – new – not anchored to past traditions.

The philosophy of serving small morsels of chic food on humongous plates as if they were works of art is the exact opposite of what Italian culinary tradition is all about.

We love to indulge in platefuls of pasta or gnocchi (and often go for a second round), and there are normally three courses (first, second, side dish, dessert and/or coffee), never a 9 or 12-course menu as served at Michelin establishments (unless, perhaps, it’s a wedding).

Too many bites of too many foods messes with flavours and numbs palates, and at the end of a long meal during which you’ve tasted so many creative twists you can hardly remember one, I always leave still feeling hungry and unsatisfied.

So back home, I often prepare myself a dishful of spaghetti because Michelin pasta servings often consist in just one fork portion artistically curled and laid on the dish. In fact, in my view Michelin starred cuisine feeds more the eye than the stomach.

The way plates are composed, with so much attention to detail, colour, and their visual impact, seems as if they’re made to show-off how great a chef is, than as succulent meals to devour. I used to look at my dish flabbergasted, trying to make out what those de-constructed ingredients were and are now meant to be, and then perplexed,

I look at the chef, and feel as if I’m talking to an eclectic painter who has created a ‘masterpiece’ with my dinner. I’m not saying Michelin starred food is not good, there are some great chefs in Italy who have heightened a revisited Italian cuisine to the Olympus of food, but I just don’t like it nor understand it.

There’s nothing greater than seeing a plate of steaming lasagne being brought to the table and knowing beforehand that my taste buds will also recognise it as such, and enjoy it, rather than finding out it’s actually a sweet pudding instead.

More than once, after a 4-hour Michelin meal with a 20-minute presentation of each dish by the chef, the elaborate food tasted has given me a few digestion problems which lasted all night long.

Michelin-starred food has started to raise eyebrows in Italy among traditional chefs, and is now the focus of a controversy on whether it embodies the authentic Italian culinary experience.

A Milanese born and bred, Cesare Battisti is the owner of restaurant Ratanà, considered the ‘temple’ of the real risotto alla Milanese.

He has launched a crusade to defend traditional Milanese recipes from what he deems the extravagance and “contamination” of Michelin-starred cuisine. “Michelin-starred experiments are mere culinary pornography. Those chefs see their own ego reflected in their dishes. Their cooking is a narcissistic, snob act meant to confuse, intimidate and disorientate eaters”.

Arrigo Cipriani, food expert and owner of historical trattoria Harry’s Bar in Venice, says Michelin-starred cuisine is destroying Italy’s real food tradition, the one served inside the many trattorias and historical osterias scattered across the boot where old recipes, and cooking techniques, survive.

“Tasting menus are made so that clients are forced to eat what the chef wants, and reflect the narcissistic nature of such chefs. Italian Michelin-starred cuisine is just a bad copy cat of the French one”, says Cipriani.

I believe we should leave French-style cuisine to the French, who are great at this, and stick to how our grannies cook and have taught us to prepare simple, abundant dishes. At least, you’ll never feel hungry after dinner.