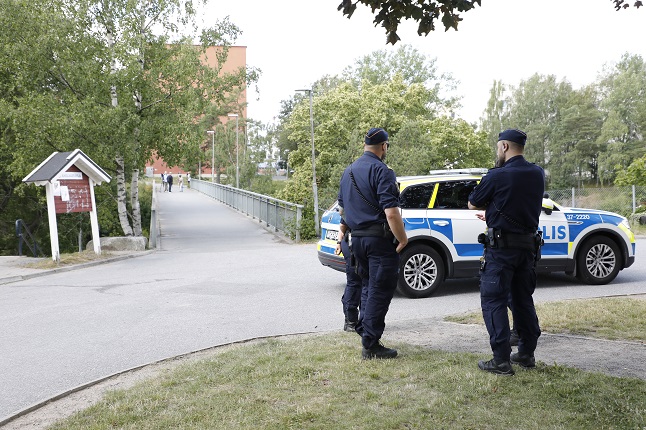 Police at the scene of a potentially gang-related shooting near Stockholm, where two young children were hurt. Photo: Christine Olsson/TT

The children, aged five and six, were injured in a shooting in the Huddinge suburb south of Stockholm on Saturday.

They were taken to hospital, though police said the injuries were not life-threatening and the children were not thought to have been the intended targets.

“It is awful, a reckless act of violence. These gangs show no empathy,” Interior Minister Mikael Damberg told the TT newswire, in reference to police comments that some of the nine people being held in connection to the Huddinge shooting had links to organised crime.

“This is not something we should have to get used to in Sweden. I understand that people are angry and feel frightened,” the minister said.

This would not be the first time a child bystander was the victim of gang violence; in summer 2020, a 12-year-old girl was killed in a drive-by shooting in Botkyrka, also south of Stockholm.

And last week, a man was shot dead in Huddinge at a spot where children were playing nearby. Deputy regional police chief Palle Nilsson said that he could not confirm whether there was a link between the two recent incidents.

“I am not going to go into [possible] connections, but what we can see over the last year is that these shootings are taking place at times that increase the risk for third parties, when people show total recklessness or indifference to someone else being hit,” said Nilsson.

He added: “It is usually about young men, often with a [mental health] diagnosis and drug problems [who are the perpetrators]. They are very bad at handling weapons. They are afraid in the situation. This increases the risk that someone else will be affected.”

More on this story:

So just how severe is the problem? Sweden overall has relatively low levels of crime and homicide both when comparing to other countries and compared to historical levels in Sweden. But a declining national trend in lethal violence came to an end in 2012, crime statistics show, and since then fatal shootings in particular have been on the rise.

While Europe as a whole, and most countries within it, have seen a reduction in both deadly violence and deadly shootings, Sweden is an outlier, with a clear steady rise in fatal shootings since 2005.

Most of the fatal shootings (80 percent), according to the National Council on Crime Prevention (Brå), are linked to organised gang crime. That proportion has risen from 30 to 50 percent in the early 2000s and less than 20 percent in the 1990s, and it is high compared to other European countries.

In the first six months of 2021, police statistics show that 13 people were killed and 11 injured in a total of 54 shootings in Stockholm, following a record high for shootings in 2020.

It is the capital region that has driven the increase in shootings over recent years. That's a change from a few years ago, when Malmö and the surrounding area (the southern police region) saw shootings at a similar level to Stockholm. By the end of June this year, the southern region had reported 21 shootings and only one death.

The southern region has worked intensively on anti-gang crime initiatives in recent years, including a US-influenced programme called Sluta Skjut (Stop Shooting) which has been partly credited with the improvement. The other major city region of Gothenburg has also seen low numbers of shootings and a positive downward trend.

Gothenburg and the western police region have seen 22 shootings in the first six months of 2021, resulting in two deaths. One of those was a police officer shot dead in the suburb of Biskopsgården where he was working as part of a patrol aimed at boosting security in the area, and believed to have been hit by accident.

As well as Damberg, leaders of Sweden's other political parties were quick to speak out on the problem of gun violence this week.

The legal policy spokesperson for the Moderate Party, Johan Forsell, has called for several policy changes, including a doubling of sentences where crimes are committed in a gang-related context. The party has previously set out its own 10-point gang crime programme, including introducing police stop-and-search zones for example.

Beyond the local Sluta Skjut programmes, which focus on speaking directly to criminal youth and offering them support to leave the gang environment, Sweden has also tightened sentences and laws relating to gang crime in recent years. These has meant giving police increased powers to carry out searches of suspects' homes and to read encrypted communications on suspects' devices, as well as tougher requirements for weapons licences.