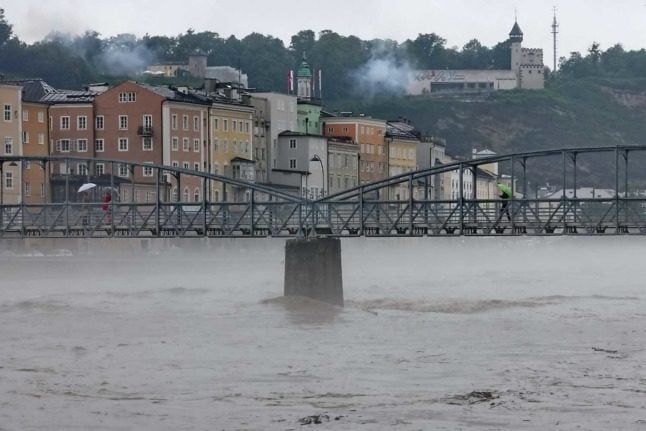 The flood waters are now receding and the clean-up operation is in place. However, on Sunday afternoon there was localised flooding in Krems.

Salzburg volunteers working around the clock

In the Salzburg region, volunteers have been working around the clock to put up sandbags in the Mittersill area, after water levels reached dangerous levels.

Behind these dams, the water reached a peak of  6.90 meters, measured from zero at the bottom of the Salzach River, and had only reduced to 6.8m by 6.30 p.m, according to the Salzburger Nachrichten.

The village of Hallein in the Salzburg region “narrowly escaped a devastating accident according to Der Standard newspaper, where volunteers and 50 members of the army were working on Sunday to clear away mud and wreckage from where the small ​​Kothbach river flooded the town.

Residents have been evacuated from parts of the old town and put up in emergency shelters set up at a school, and volunteers have been filling sandbags in an effort to stop flooding.

In Kuchl, also in the Salzburg region, drinking water was contaminated due to flooding, according to broadcaster ORF.

The Mayor of Kurfstein in Tyrol said the city centre was “under water in a way that we have never seen before,” the Wiener Zeitung reports. Tyrol has also experienced numerous mudslides, flooded cellars and garages over the weekend.

People were told to stay home, not to enter underground garages and cellars and also to stay away from the dams of the rivers in the The Zell am See district and in Lower Austria on Sunday due to fears of mudslides.

Fire brigades across the country have been on almost 1,000 missions since Saturday, and more than 500 Viennese firefighters have been making trips from the city to help those nearby affected by the floods.

Heavy rain also created a risk of flooding and mudslides across Styria, as well as numerous damage. In Upper Styria, especially in Ennstal, Gesäuse and Mariazeller Land, the fire brigades have working around the clock since Saturday evening, broadcaster ORF reports.

In Vorarlberg, the city of Dornbirn was particularly bady affected. In the Seebach valley in Carinthia, there were several mudslides on Saturday afternoon, and a couple of mountain hut dwellers had to be flown out from 1,338 meters above sea level, when the route down was blocked, broadcaster ORF reports.

In Upper Austria, extreme rainfall in Schärding, Steyr and in the Salzberg region has caused cellars to flood. Mobile protective dams will be put up along the Danube, broadcaster ORF reports, adding it is expected this is expected to contain the flooding.

Kurz ‘shocked’ by images of flooding

Sebastian Kurz said he was “shocked” by the images of flooding in Tyrol and Hallein, and promised money from the disaster fund.

He thanked the volunteers and fire brigades in a tweet, which read “I  would like to thank all the emergency services and volunteers who do everything to help! We will not leave those affected alone and support them in rebuilding.”

Vienna bans swimming and boating in the New Danube

Vienna experienced more than a month’s rainfall in a few hours during dramatic thunderstorms on Saturday and firefighters were busy pumping out flooded cellars, underground garages and underpasses at the weekend according to broadcaster ORF.

People have been banned from swimming or boating in the New Danube in Vienna as floodwater has entered the waters, which are now “cloudy”, Austrian agency APA reports. There may also be strong currents in the water.

Austria is set to experience its first heatwave of the year, with temperatures rising to 30C (86F) in several states, according to forecasts from Austria’s Central Institution for Meteorology and Geodynamics (ZAMG).

Already this Wednesday, the Western state of Tyrol will see high temperatures ranging from 25C to 30C. The state residents can also expect a lot of sunshine throughout the day.

This Thursday, Styria will be affected by the high temperatures, getting the warmest day of the year so far. In the southeast, it will be up to 30C, and in Upper Styria, 24C to 29C. In all other states, including Vienna, temperatures can get as high as 29C.

With rain expected to fall over the entire country on Friday, temperatures will drop again.

The beginning of the weekend should see a maximum of 26C in East Tyrol. Also on Saturday, as thunderstorms affect mainly the West of Austria.

READ ALSO: Six of the best things to do in spring in Vienna

On Sunday, though, the sun is expected to shine again in most of the country. Maximum temperatures should be between 25C and 28C, according to ZAMG.