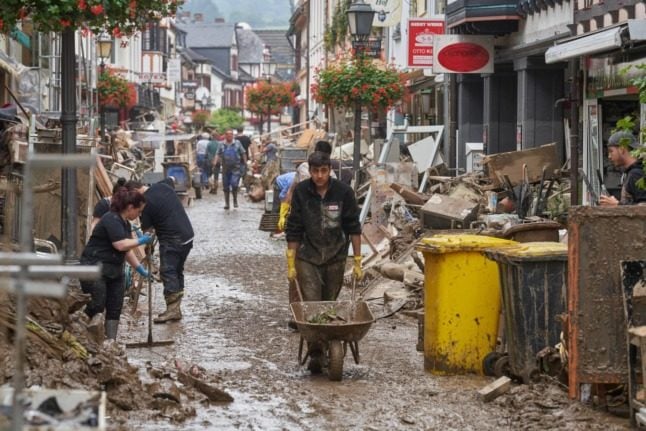 With more than 160 people dead across Europe and the toll still climbing, many are asking: How did this happen and why has it been so bad?

“Masses of air loaded with water had been blocked at high altitude by cold temperatures, which made them stagnate for four days over the region,” Jean Jouzel, a climatologist and former vice-president of the Intergovernmental Panel on Climate Change (IPCC), told AFP.

Between 100 and 150 millimetres (four and six inches) of rain fell between July 14 and 15, according to the German weather service – an amount that would normally be seen over two months.

Europe has been hit repeatedly by severe flooding before, but this week has been “exceptional in terms of both the amount of water and the violence” with which it was dumped, according to German hydrologist Kai Schröter.

Many European politicians have squarely blamed global warming for the disaster, while Germany’s far-right AfD has accused them of “instrumentalising” the floods to promote a climate-protection agenda.

“We cannot yet say with certainty that this event is linked to global warming,” Schröter told AFP, but “global warming makes events like this more likely”.

In technical terms, climate change means the earth is becoming warmer so more water is evaporating, which “leads to larger water masses in the atmosphere”, increasing the risk of intense rainfall, he said.

The worst-hit areas have been those near small rivers or tributaries without flood defences that have quickly become overwhelmed by the volume of rain and burst their banks.

“The Rhine is used to floods” and cities along it have built protections, unlike the towns and villages along the region’s smaller rivers, Armin Laschet, head of the hard-hit North Rhine-Westphalia region, said.

“When rivers are slower and wider, the water rises less quickly and there is more time to prepare,” said hydrologist Schröter.

Local authorities have come under fire in Germany for not evacuating people soon enough.

“Forecasters… issued warnings, yet the warnings were not taken seriously and preparations were inadequate,” said Hannah Cloke, a professor of hydrology at the UK’s University of Reading.

Some residents were also simply unaware of the risks of such violent flooding, with dozens found dead in their cellars.

“Some victims underestimated the danger and did not follow two basic rules during heavy rainfall. Firstly, avoid basements where water penetrates.

Secondly, switch off the electricity immediately,” Armin Schuster, chairman of the BBK, a state agency specialising in natural disasters, told the Bild daily.

Some experts have pointed to the dangers of poor urban planning and the increasing amount of concrete at the heart of a heavily industrialised, densely populated region of Europe.

The affected regions had already seen unusually high rainfall in recent weeks, meaning the soil was saturated and unable to absorb the excess water.

When the ground is covered with man-made materials like concrete, the soil is less able to absorb water, increasing the risk of flooding.

“Urbanisation… has played a role. Would the toll have been as high 40 years ago?” Jouzel asked.