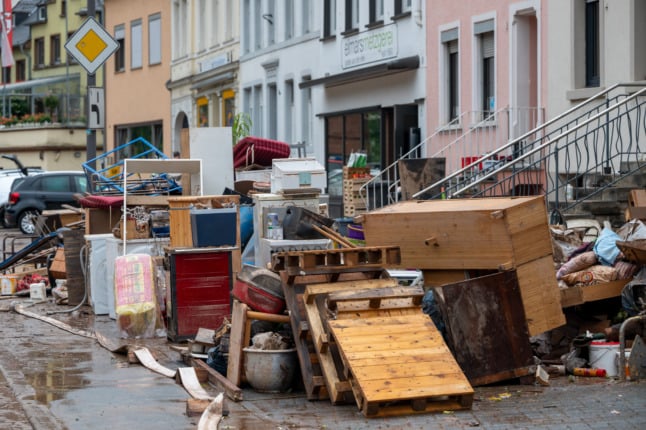 A mountain of destroyed furniture lies in the sodden streets on July 16th after the Kyll River broke its banks. Photo: picture alliance/dpa | Harald Tittel

In a press release announcing the new donations account, state premier Malu Dreyer said the state had experienced a wave of solidarity and helpfulness in the wake of the natural disaster.

“This national catastrophe shows once again that Rhineland-Palatinate stands together in these difficult times. That makes me incredibly proud,” she said.

“We are currently receiving numerous inquiries as to how people affected by the storm in Rhineland-Palatinate can be supported,” state minister of the interior Roger Lewentz and state minister of finance Doris Ahnen said on Friday.

“This shows that the population is really willing to help.”

The donations pot was set up by the State Ministry of the Interior at Sparkasse Mainz.

Donations can be made using the keyword “Katastrophenhilfe Hochwasser” (Disaster Aid Flood). Bank details for the account can be found in the state press release.

In a joint announcement on Friday, the organisations want to set up an aid fund with three million euros. Residents of a flood-hit town try to clear the mud from gardens and streets on Friday. Photo: picture alliance/dpa | Harald Tittel

“The images of the floods and devastation, the full extent of this catastrophe, leave us affected and appalled,” said a joint statement. “Our thoughts go with the relatives of the deceased, the injured and the many people in need.”

The money will not be able to alleviate human suffering, they said.

“But we hope to be able to provide support together at least in some areas. In this crisis situation, solidarity is a given.”

In addition, the DFB has also contacted the European Football Union UEFA, which has also agreed to support.

Government will do ‘everything in its power’ to offer support

In the wake of the disaster, German Chancellor Angela Merkel (CDU) promised unmitigated support at all governmental levels for those who had been affected by the floods.

“You can trust that every part of our state – from the federal, state and local governments – will do everything possible to save lives, avert dangers and alleviate hardship, even under the most difficult of conditions,” she said in a press conference on Thursday.

Minister of the Interior, Horst Seehofer (CSU) and Minister for Agriculture Julia Klöckner (CDU) have both said that those who have lost their belongings in the flood will be given financial aid quickly and unbureaucratically.

“These are great tragedies, they can hardly be put into words,” explained Klöckner, who is also the CDU chairwoman for Rhineland-Palatinate. “The federal government will be at the side of those affected with all the means at its disposal.”

Having returned from a diplomatic visit to the United States, Merkel is said to be in discussions about visiting the flood-hit areas in the coming days.