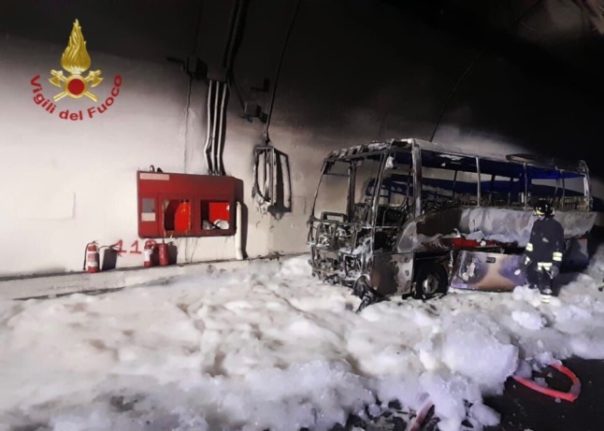 The vehicle was travelling in a tunnel along the northbound lane of the Superstrada 36 near Lierna in the province of Lecco at 10am when the driver realised something was wrong.

He managed to get the children off the bus before it exploded into flames, engulfing it and completely gutting the vehicle.

Driver Mauro Mascetti told news outlet TGCom 24, “Once I understood what had happened I did not hesitate to protect the passengers by getting them off the bus and arranging for them to be taken to safety.”

After the children were safe, Mascetti tried to put out the fire but couldn’t manage. “The priority was to save the children’s lives,” he added.

Five fire brigade teams from the Lecco and Bellano departments arrived on scene to extinguish the flames and move the bus to a safe area.

The fire service tweeted that passengers on board were unharmed and that teams were working to clear the road.

No ambulances were needed, but seven of the 25 children between 14 – 16 years old were taken to hospital for examination, reported news agency Ansa.

They are believed to have inhaled smoke, but their condition is not a cause for concern.

The bus, which was owned by the Como Red Cross, was serviced in June, the owner of the bus explained in a statement. They believed the bus caught fire after a tyre exploded.

Buses catching fire isn’t all that rare of an occurrence in Italy. In fact, they happen fairly regularly in Rome – so much so that they have their own nickname among Romans: “flambus”, a reference to Trambus, as the Roman public transport provider was formerly known.

Almost 60 buses in Rome burst into flames in an 18-month period.

Outside of Rome, another bus in Italy recently also caught fire in Bari last month – nobody was injured.

Why this keeps happening may be down to something as simple as the age of the buses and dirt.

Engineers, technicians and the companies that build the buses have investigated why they keep catching fire and one of the primary causes of fires is a lack of cleanliness, reported newspaper La Repubblica.

Fires can be triggered by residues of oil or other greasy substances that create crusts of easily flammable material.