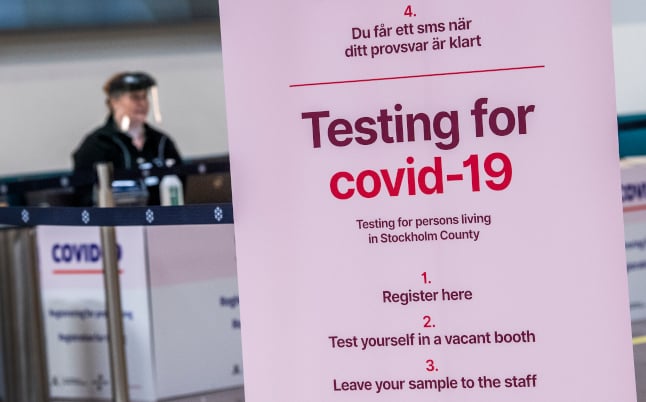 This recommendation also applies to Swedish citizens and residents, regardless of which country (outside the other Nordic countries Denmark, Norway, Finland and Iceland) they travelled from. It is free to get tested if you are arriving in Sweden from overseas.

The change was issued by the Public Health Agency on Monday, applies from July 12th until August 31st, and follows similar recommendations earlier in spring.

The guidelines are being reintroduced due to lifted restrictions and an increasing spread of the infectious Delta variant of the coronavirus in popular tourist destinations in Europe and other parts of the world.

“The Swedish Public Health Agency has received reports of several cases of Covid-19 where people were infected in connection with nightlife abroad in nightclubs, pubs and places where new contacts are made. This in turn increases the risk of spread of infection and outbreaks in Sweden, where the domestic spread of Covid-19 is now at a low level,” said state epidemiologist Anders Tegnell in a statement.

He told a press conference on Monday that it was mainly people living in Sweden who were bringing the infection home, rather than foreign tourists spreading the virus, but the recommendation applies to everyone regardless of their reason for travelling or returning to Sweden.

The recommendation comes amid concerns of the rise of the Delta variant of coronavirus, which is more infectious. The first dose of a Covid-19 vaccine appears to offer less protection against Delta than against other variants, although two doses offer good protection.

The Public Health Agency has previously predicted that the Delta variant will become the dominant variant in Sweden in the coming months. The spread of the variant is increasing, with more than 1,800 confirmed cases, although the total number of new Covid-19 cases is still falling in Sweden.

Not all countries are seeing falling rates of the virus, however, and in neighbouring Denmark they have been on the increase for almost two weeks, with Delta making up the majority of new cases. The Local’s reporter Isabella Anderson asked Tegnell at the press conference on Monday why the Nordic countries were exempt from the tightened testing guidelines, with no restrictions currently applying to travel from the Nordics.

“These are countries (…) that have very low spread of infection even though it’s increasing, so in this situation we think it is reasonable to exempt these countries from which travel is so extensive that it’s practically very, very difficult to follow this kind of advice. We try to avoid advice that can’t be followed, and considering all the movement of labour across these borders, you can’t practically keep testing like that,” said Tegnell, adding: “That Denmark has very high numbers is probably partly due to the fact that they are testing an enormous lot at the moment, so I don’t think the situation there is at all comparable to what you’re seeing in Spain, the Netherlands, Portugal.”

You can listen to The Local’s questions at the press conference (in Swedish) here, from 37:30:

People who have been travelling within the EU and received their first dose at least three weeks before arriving in Sweden or had Covid-19 in the past six months, are exempt from the recommendation. They should however get a coronavirus PCR test if they develop symptoms.

The Public Health Agency also advises travellers to “be careful about who you meet” the week after returning to Sweden, and in particular avoid meeting risk groups. “If you are infected you risk spreading the infection at, for example, your workplace and to your closest circle. For that reason, pay very close attention to mild symptoms and keep a physical distance,” the recommendation states.

ALSO TODAY: Sweden to go ahead with Covid-19 rules relaxation from mid-July

Depending on where you’re travelling from, you may have to follow even stricter guidelines. Travellers from most non-EU countries (i.e. a country that is outside the EU/EEA and is not on the EU’s list of exempted third countries), are as before additionally urged to get a second test on the fifth day after arriving in Sweden, and self-isolate for seven days after arriving even if the tests show they don’t have Covid. Fully vaccinated travellers (with vaccines approved by the EMA or the WHO’s emergency authorisation) are however exempt from this.

Unlike tests for people who want to travel abroad from Sweden, PCR tests for returning travellers are free for everyone and available via the healthcare system, Tegnell told a press conference on Monday. They can be ordered via healthcare website 1177.se.

It is important to note that the recommendations in this article refer to what happens after you’ve arrived in Sweden. Sweden also has several border restrictions in place, which regulate who is allowed to enter the country at all and what kind of documentation you need to show. These rules vary depending on where you travel from, and may include the Covid-19 health pass, a PCR test, or your reason for travel.

The EU Entry/Exit System (EES) will record the biometric data (finger prints and facial recognition) of non-EU citizens travelling for short stays to the Schengen area (EU countries minus Ireland, Romania and Bulgaria, plus Norway, Iceland, Liechtenstein and Switzerland), each time they cross the external borders.

Fully digital, the system will enable the automatic scanning of passports replacing manual stamping by border guards. The data collected will be kept in a centralised database shared among the Schengen countries.

The EES was created to tighten up border security and will ensure the enforcement of the 90-day limit in any 180-day period for tourists and visitors. But it requires changes in the infrastructure at the external borders, including airports, and the setting up of a new digital infrastructure to connect authorities in participating countries.

Its entry into operation has already been delayed several times. The latest date for the EES launch was May this year, but last week European authorities decided to postpone it again “due to delays from the contractors”. It is now expected to enter into force at the end of 2023, as The Local reported this week.

“The EES will be a game changer for how the EU’s borders are managed. There are, however, a number of issues which must be resolved to ensure a smooth roll out and operation of the new system so that air passengers do not face disruptions,” a joint statement says.

Things to be resolved include a “wider adoption and effective implementation of automation at national border crossing points by national authorities, funding by member states to ensure a sufficient number of trained staff and resources are deployed to manage the EU’s external border, particularly at airports,” and the “deployment of sufficient resources” to help airports and airlines with new procedures.

Airlines also said there needs to be a public communications campaign to inform non-EU citizens about the changes.

In addition, industry groups called on EU-LISA, the agency responsible for managing the system, to “strengthen communication” with airlines and with international partners such as the US “to ensure IT systems are connected and compatible.”

The decision to postpone the EES entry into operation until after the summer “will give airlines, airports and EU and national authorities the opportunity to resolve these issues and ensure the system is fully tested,” the statement continues.

The EU-LISA is currently preparing a revised timeline for the launch, which will be presented for approval at the Justice and Home Affairs Council, the meeting of responsible EU ministers, in March 2023.