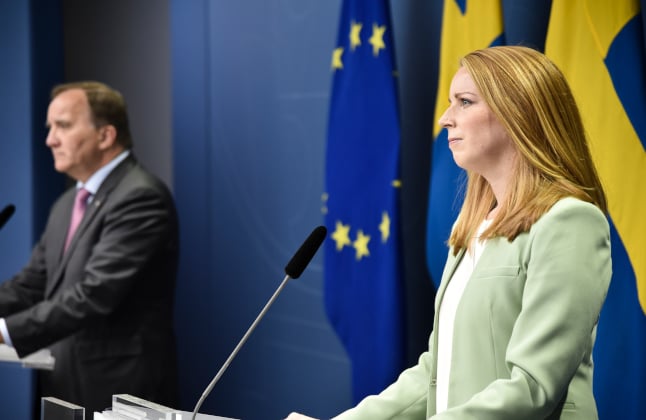 After losing a vote of no confidence on June 21st, Prime Minister Stefan Löfven declared that he would be resigning on Monday morning. This triggered new ’rounds’ of talks between party leaders and the parliamentary speaker, Andreas Norlén, who will try to assess what a government backed by the majority of parliament would look like.

The first round was completed on Tuesday, with Moderate Party leader Ulf Kristersson the first to be given the task of trying to form a government.

The parliamentary seats are divided the same way they were after the election in 2018, but with allegiances shifting somewhat, we can expect whatever new government comes out of the process to look slightly different.

So who are the possible candidates for prime minister? Ulf Kristersson leads the Moderates, the second largest party in the Riksdag. He’s the de facto leader of the opposition and also a possible candidate for Prime Minister. This position saw him named by the parliamentary speaker as the first sonderingsperson, meaning he has three days to try to form a viable government.

The Liberal’s new leader Nyamko Sabuni has said that instead of continuing to prop up the centre-left as a support party, they will pursue a conservative government in collaboration with the Moderates and Christian Democrats, with the support of the Sweden Democrats. These parties (minus the Sweden Democrats) formerly worked together with the Centre Party in a bloc known as the Alliance.

These four right-of-centre parties only have 174 mandates in Parliament, however should only one MP chose to go against their party and vote for the right bloc, they could get the needed majority. The most likely scenario for this to happen would be an MP from the Centre Party going against their party line; in 2018, the party’s MP Helena Lindahl voted against her party line to oppose Stefan Löfven.

But the Centre are not the only party whose inner divisions may play a role.

“One important thing to consider is that the Liberals are internally divided and it is not certain that all Liberals will vote according to Nyamko Sabuni in another vote,” said Jenny Madestam, a lecturer specialising in Swedish party leadership at Södertörn University

The Liberal Party’s national committee voted in favour of campaigning as part of a right-wing alliance in the 2022 general election, even if it meant involving the anti-immigration Sweden Democrats in negotiations, but the vote was far from unanimous. The second vice-chair of the party was one of the strongest internal critics, announcing after that vote that he would not put himself up for election in 2022.

Political scientist Johan Hellström, who researches government formations at Umeå University, told SVT he believed a Moderate-led government is only likely if a new election takes place which gives the right-wing bloc a majority. Despite losing the vote of no confidence, Social Democrat leader Löfven remains a likely leader of a new government. His current government is a coalition with the Green Party, which came to power with support from the Left Party as well as the Centre and Liberal Parties to the right of the political spectrum, who in turn negotiated influence on 73 policy points in the so-called January Agreement.

The Left Party have stated that Löfven is their preferred candidate for PM, but that the new budget he forms must exclude market rents, an issue included in the January Agreement and which initially sparked the no-confidence vote.

The Liberals have declined invitations to cooperate on a revised January Agreement, preferring a right-wing government. But even without the Liberals, the Social Democrats, Green Party, Centre Party and Left Party have enough mandates to pass a wafer thin majority in parliament, their seats adding up to 175, the exact number needed out of 349 to gain a one-seat majority.

“Mathematically, Löfven has the upper hand, but it also depends on whether he works out what he couldn’t before the vote; a majority support for a budget,” Madestam said.

For this to take place, an agreement would need to be reached between the Centre Party and the Left Party who, despite some progress in the last week, are reluctant to work together. The Centre Party has agreed to drop the demand for market rents but replace this with other demands on lower taxes for low- to middle-income earners.

“The Left Party does not want [right-of-centre Moderate Party leader] Ulf Kristersson as the prime minister and no party wishes to be the one who could not find a solution and cause a snap election. These things combined might make the Left Party accept a budget with the Social Democrats, Green Party, and Centre Party which they do not get any influence over,” Madestam told The Local. Despite the Centre Party only winning 8.6 percent of the 2018 vote, Lööf is often considered one of Sweden’s more powerful political players, due to her popularity and close relationships on both sides of the aisle.

“If the locked state in the parliament remains, it is possible that we would see [Lööf] as Prime Minister with a middle government including the Centre Party, Green Party and Liberals with a so called ‘jumping majority’ (hoppande majoritet) which works through support from different sides for different policies. This would mean not approving a full budget from the start, which will be more uncertain but not impossible as we have seen it before in Sweden’s political history,” Madestam said.

“Another option would be that Annie Lööf demands the Prime Minister post from Stefan Löfven in exchange for cooperating with the Left Party,” Madestam said.

Hellström also believes this is a likely outcome, telling SVT: “[Lööf] is number two on my list of likely prime ministerial candidates.”

In 2018 during the four-month long speaker rounds, Lööf was given the task to try to form a government after both Löfven and Kristersson had been unsuccessful in their first attempts, however she could not get support from either one.

Her chances might look different this time as this government would only be in power for about a year until the next regular election, which will take place in September 2022. A similar solution to a political crisis was found in 1978: after the then-Prime Minister and Centre Party leader resigned, the leader of their coalition partner the People’s Party (the former name for the Liberals) took power for a year before the next election.

Furthermore, Löfven has put heavy emphasis on wanting to avoid a snap election during Covid-19, and might be more pliable now. Speaking to public broadcaster SVT after announcing his resignation, the Social Democrat said: “I think the country needs to get out of an uncertain political situation as fast as possible”.

Even though Löfven chose to avoid a snap election on Monday, it does not exclude the possibility. The parliamentary speaker has a maximum of four attempts to form a government and if none of these pass, there will be a snap election regardless.

The past few weeks of uncertainty have already seen some concessions on both sides.

“A snap election now would mean a failing grade for our elected representation,” Madestam said.

Paludan and his party have been holding demonstrations this week involving burning the Koran, in what Paludan describes as an “election tour” ahead of standing in Sweden’s parliamentary election in September.

However Swedish newswire TT has reported that few people have seemed to care about the shock tactics used and police have confirmed that no major disturbances have occurred as a result of the demonstrations.

This is in stark contrast to the demonstrations over Easter, which resulted in riots involving vandalism and violence aimed primarily at police. A total of 26 police officers were injured and at least 40 people were arrested.

“The police did not anticipate the extent of the protests and the enormous violence that the Easter riots brought with them. I don’t know if we have seen anything similar in Sweden in modern times,” Sten Widmalm, political scientist at Uppsala University, told newswire TT.

Widmalm says there are now fewer people turning up at Paludan’s demonstrations because of the number of people charged over the Easter riots. He also noted the increased police presence and adapted resources by the police, which has stopped anyone getting close to using violence.

Everyone that TT newswire spoke to a demonstration in Fittja torg, said they knew Paludan’s aim was to provoke people.

“I am a Muslim myself and I don’t care. For a true Muslim, all religions are equal. His message is to create conflict and irritation. You shouldn’t give him that,” Himmet Kaya told TT.

According to Widmalm, there is nothing to indicate that Paludan will be successful at the Swedish election.

“On the other hand, I think that Stram Kurs has influenced Swedish politics very much in such a way that it has exposed large gaps in society. I think awareness of these has increased, due to the Easter riots – although it’s nothing to thank Paludan for.”

In Sweden, you must be a Swedish citizen in order to be elected to parliament. Paludan’s father is Swedish, and he applied for and was granted Swedish citizenship in 2020.

In order to enter the Swedish parliament, Paludan must win at least four percent of the vote in the upcoming election.