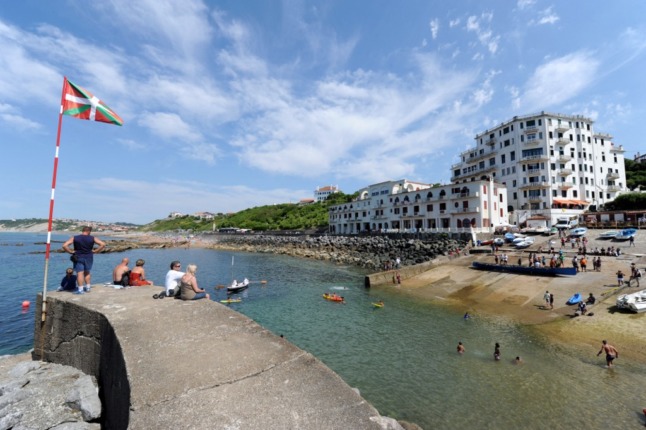 Half of homes in Guethary are now second homes. Photo: AFP

In recent months, several properties with for-sale signs and estate agents in the region bordering Spain have been defaced with graffiti declaring “Euskal Herria ez da salgai”, (the Basque country is not for sale).

Some of the slogans have taken aim at holiday-home owners from the capital, who decamped to the coast during successive Covid-19 lockdowns.

“Parisians, go home, you are the virus of the Basque country,” giant posters pasted on the walls of houses in the village of Urrugne in March read.

But the anger is also directed at families cashing in their apartments in Paris and other French cities for a bigger home in a region that boasts some of Europe’s top surfing beaches, with the Pyrenees mountains looming in the distance.

After playing second fiddle for decades to the Cote d’Azur in the glamour stakes, the Basque country is having a moment.

He described them instead as people with “big corporate jobs, for example” who spend a few days a week in the city and the rest with their families in the Basque country.

The floodgates opened with the launch of a new high-speed train line from Paris to the mid-way station of Bordeaux in 2017, which brought Biarritz within nearly four hours of the capital.

A massive shift to home-working since the start of the coronavirus pandemic facilitated the move, causing house prices — and tempers — in the Basque region to flare.

In Guethary, a fishing village of 1,300 inhabitants where every second house is a holiday home, several estate agents and homes with for-sale signs have been vandalised.

The village’s mayor Marie-Pierre Burre-Cassou blames the tensions on spiralling property prices, which average €7,400 per square metre, compared with €6,670 in the greater Paris region.

With apartments in resorts like Biarritz now often commanding seven-figure sums, the demand for holiday homes is creeping inland to rural villages and farming communities.

An activist with the group Baiona Angelu Miarritze (Basque for the cities of Bayonne, Anglet and Biarritz), which campaigns for affordable housing, warned of growing despair among young people unable to get a foot on the property ladder.

“And when it begins to mobilise people that despair can become dangerous,” warned the activist, who asked to remain anonymous.

France’s Basque country was largely spared the bloodshed seen in Spain during the four-decade quest by separatist group ETA for an independent Basque state between 1968 and 2010, in which 853 people died.

But nationalists on the French side of the border have also used violence in the past to draw attention to their aims.

Estate agents and tourism industry operators accused of “folklorising” the region were targeted in several bomb attacks in 2007 and 2008.

No-one was injured in the explosions, several of which were claimed by French Basque separatist group Irrintzi, under the slogan “the Basque country is not for sale”.

Jean-Daniel Elichiry, a member of the Bake Bidea movement, which campaigned for a peaceful resolution to the Basque conflict, is among several officials warning of a risk of a return to violence.

Pointing to posts on social media expressing nostalgia for “the good old days of ETA”, he said: “There’s something very worrying about that.”

In Biarritz, where several cars with license plates from other French regions were vandalised in May, mayor Maider Arosteguy also fears that the growing chasm between new residents and local “have nots” could endanger the fragile Basque peace process.

“The risk is that a big part of Basque youth could become radicalised,” she said.

Between 2007 and 2017 the number of second homes in the French Basque country increased by 19 percent, according to the regional authority.

Resentment over the newcomers from Paris and other French cities has been matched by frustration over a shortage of rental properties, with Airbnb blamed for shrinking supply of long-term rentals in favour of holiday lets.

To draw attention to what he calls the “speculative” nature of the rental market, a former Biarritz councillor, Eric Bonnamy, filmed himself using a grinder to dislodge boxes used to store keys for Airbnb clients on the street.

For Biarritz mayor Arosteguy such actions are “almost terrorist”.

In an interview with French television she suggested introducing tax breaks for property owners who offer year-round rentals.

The activist from Baiona Angelu Miarritze urged politicians to act fast against what he described as the threat to peace from unbridled capitalism.

“We’ve got to a point where we have to say stop,” he said.

Whether you’re moving down the street, to the other side of town, or to a different département, the administrative scale of the task is almost as big as the physical side – and at least as stressful, unless  – on actual moving day – you lose the kettle and can’t make a cup of tea.

The job of moving house gets more difficult the closer you get to moving day, and it’s easy to forget or put off those administrative jobs you have to do. So, here’s a list of those annoying red tape jobs you need to consider in good time.

1. Give notice to your landlord

If you’re renting your current property, you need to give either one month or three months’ notice – depending on the type and location of the property rental –  that you’re moving out, and arrange with your landlord a suitable time to carry out an état des lieux of the property, similar to the one carried out when you moved in.

Parents of school-age children attending state-run schools must notify the establishment if they move out of its catchment area, and find a new school for their children within eight days of moving.

Under certain circumstances children will be able finish the school year in the establishment they attended before the change of residence.

The first step is to contact the town hall in the town you are moving to. The full rules, including those for children in private education or who are home schooled are here.

3.Tell the taxman – and other administrative bodies

The taxman needs to know you’re moving – if only to send your next tax form to the right address.

You can inform tax officials of the fact and date of your move online, by logging into your Personal area on the impots.gouv.fr website.

Here, at least, there’s some additional good news. France has set up a system in which you can tell a number of administrative offices – including the tax office, EDF, Pôle emploi, and Caf – that you’re moving house with one online form. Find it here.

Anyone living in France on a residence permit – such as Britons who have a post-Brexit Carte de séjour – needs to update the address on it.

The process can be completed online.

Sadly, for technical reasons, declarations of change of contact details to the Vehicle Registration System with an effective date after June 30, 2022, aren’t currently included in the one form, all admin system mentioned above.

So, to change the registered address of your vehicle on its carte grise, you need to go to the ANTS website

Bizarrely, there is no rush to change the address on your driver’s license.  You can leave it until you apply for a new one (for example, if you lose it, or it expires) – and there’s no dedicated ‘change of address’ option on the driver’s licence application section of the ANTS website.

You need to contact your electricity and gas supplier, as well as the water company and whoever operates your telephone, TV, internet package.

Be aware, if your current internet operator is unable to supply your new home, you can request the termination of your subscription free of charge.

Don’t forget your bank, either.

You may want to change your GP – especially if you’re moving some distance. You will need to find a GP able to take on new patients, and they will be able to help with the process.

In France, carnivorous pets such as dogs, cats and ferrets, must be identifiable – usually by microchip, or tattoo – so that they can be returned to their owners if they get lost. This information is kept on a national database, which must be updated when you move house. Do that here

9. Get your mail forwarded

La Poste will forward any letters to your new address for up to 12 months. Click here for more information.

10. Help with the costs of moving

You may be eligible for some help with moving costs on the day itself. Those on lower incomes may be able to access help from the fonds de solidarité pour le logement towards the cost of hiring a removals firm, for example.

Parents with three children or more, or who are expecting a third child may be eligible for a moving allowance from CAF under certain conditions. More information is available here

PROPERTY
REVEALED: Where in Sweden is it easiest to find student housing