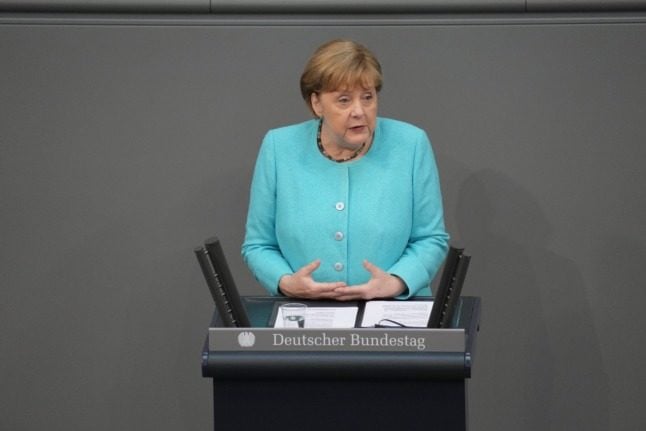 Merkel is bowing out of German politics at the next federal election in September after nearly 16 years as chancellor.

In what could be her final government statement in the Bundestag, Merkel talked about the Covid-19 situation in Europe and Germany, saying that although things had improved massively, there was still work to be done.

She said the fight against the pandemic over the last 18 months has kept countries “holding our breath, at home and internationally”.

Merkel went on to say that Europe could be “cautiously optimistic”, adding that in Germany and most member states “case numbers are sinking considerably” and the “number of vaccinated people is rising”.

However, she said the pandemic is not over.

“Even though there is reason to be hopeful, the pandemic isn’t over, particularly in the world’s poor countries,” said Merkel.

“We in Germany and the EU are also skating on thin ice,” she said. “We must remain vigilant. New variants in particular, notably the Delta variant, mean we must be cautious.

In Germany, the Delta variant now makes up about 15 percent of new cases, according to the Robert Koch Institute.

However, the incidence rate in Germany currently stands at just 6.6 cases per 100,000 people within seven days.

On the topic of digital health passports, Germany has “done its homework,” Merkel said. Around 29.2 million digital vaccination certificates have been issued to people across the country since the launch earlier in June.

Merkel urged for lessons to be learned from the pandemic. She said it had become clear that the initial shock had mainly been dealt with at a national level and not collectively.

When it came to restrictions, there has been too much hesitation, said Merkel. And there are still difficulties in coordinating travel rules for people entering EU countries.

Merkel’s statement came ahead of an EU summit with the 27 heads of state, which is set to begin on Thursday afternoon in Brussels.

Merkel also said the EU should seek direct talks with President Vladimir Putin even as it stands together against “provocations”.

“In my opinion, we as the European Union must also seek direct contact with Russia and the Russian president,” she told parliament.

“It is not enough for the American president to talk to the Russian president,” she said, stressing that the European Union too “must also create different formats for talks”.

Putin and US President Joe Biden held face-to-face talks last week, in a meeting that both said could lead to a more predictable, albeit still tense, relationship.

Merkel said recent events had shown that it was not enough “if we react to the multitude of Russian provocations in an uncoordinated manner”.

Rather, the 27-member bloc should put up “a united front against the provocations”.

Moscow is at loggerheads with a number of Western capitals after a Russian troop build-up on Ukraine’s borders and a series of espionage scandals that have resulted in diplomatic expulsions.

In a latest case adding to tensions, Germany arrested a Russian scientist working at a German university, accusing him of spying for Moscow.

The ongoing detention of Kremlin critic Alexei Navalny, who received treatment in Berlin after a near-fatal poisoning, has also sparked outrage in the EU.