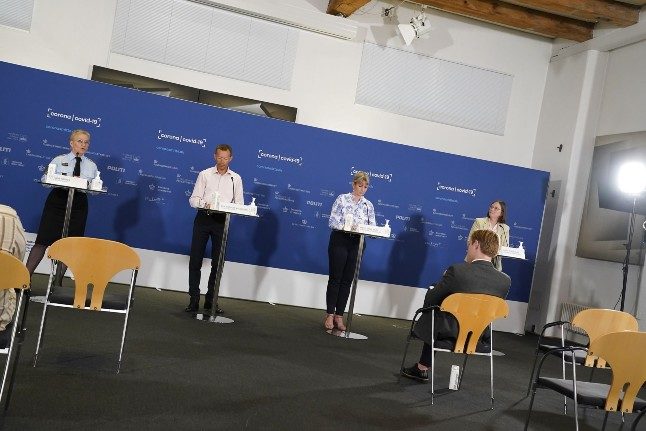 Test capacity will be scaled down

Under the downscaling plan, the capacity is reduced when the number of people being tested falls below certain thresholds. On Tuesday, there have been seven days in a row with less than 300,000 daily rapid tests, shifting the capacity required to phase two, the second of the five phases. Phase five will come when there have been under 50,000 daily tests for seven days, at which point the capacity will be reduced to 100,000 tests per day.

“Even if many Danes have been vaccinated and got their coronapas, there’s still a need for people to be able to get tested,” said Denmark’s justice minister Nick Hækkerup. “At the same time, we don’t want to test more than necessary, as the vaccines are rolled out. That’s why we are adjusting our testing efforts in the future.”

Expect more queues at airports and stations as travel increases

The end of test and isolation requirements for travel from the European Union and Schengen countries and the start of the use of the coronapas for cross-border travel from Saturday will mean increased queues at airports and stations, said Anne Tønnes, director of the Copenhagen Police at the conference.

“You must take this into account when planning your trip in and out of Denmark,” she said.

Denmark is no longer on the list of countries The Netherlands considers “safe”, meaning anyone travelling to the country will need to show a PCR test less than 72 hours old, go into isolation on arrival in Denmark for at least five days (ten without a coronavirus test), and bring a quarantine certificate showing where you intend to spend your isolation.

The Netherlands is not yet able to accept the Danish coronapas, so you need to have a test result printed out.

You can however, watch the match at late notice if you can travel in and out of Denmark on a day-trip, with the entire visit lasting less than 12 hours.

“It should be technically possible, but you have to plan it quite carefully. For most people, it will probably be better to stay home,” said Erik Brøgger Rasmussen, from the Ministry of Foreign Affairs consular service.

According to the Danish Patient Safety Authority, only 29 Covid-19 infections have so far been linked to Euro2020 matches played on Danish soil, either in stadiums or at events where the match is projected onto a big screen. So far the Danish team has played three matches on Danish soil.

So far 235 cases of the more infectious Delta variant of coronavirus, which was first identified in India, have been detected in Denmark. As the variant has been shown to be more contagious than the now dominant Alpha variant, which was first detected in the UK, Anette Lykke Petri said she expected it to eventually take over.

“We expect it to become the dominant variant in Denmark at some point,” she said. “Our strategy is to delay this process so we can get as many Danes as possible vaccinated. The more people who have had a second dose of the vaccine, the better. The vaccines we have in Denmark are quite effective.”

“We sincerely apologize to our customers who were affected by the July strike,” Anko van der Werff, the company’s chief executive, said in a press release. “We are happy operations returned to normality again allowing us to start regaining our customers’ trust.”

According to the release, 1.3 million passengers travelled with the airline in July, which was still a 23 percent increase on the same month last year, when Covid-19 restrictions were still reducing tourism levels.

“In comparison with last month, the total number of passengers decreased with 32 percent and capacity was decreased by 23 percent, which was a result from the 15-day pilot strike,” the release read.

Pilot unions in Sweden, Denmark and Norway, went on strike for 15 days last month over pay, conditions, and the company’s refusal to rehire pilots laid off during the Covid-19 pandemic on the same terms as before.

The strike, which cost the airline between €9m and €12m a day, was ended on July 19th, after which it took several days to get flights back to normal.

Van der Werff said company said it would now continue putting in place its restructuring plan, SAS FORWARD, and push ahead with restructuring in the US, where the company has filed for Chapter 11.

He said these would both “accelerate the transformation process that will lead to a financially stable airline, that will be able to deliver the service our customers are expecting”.