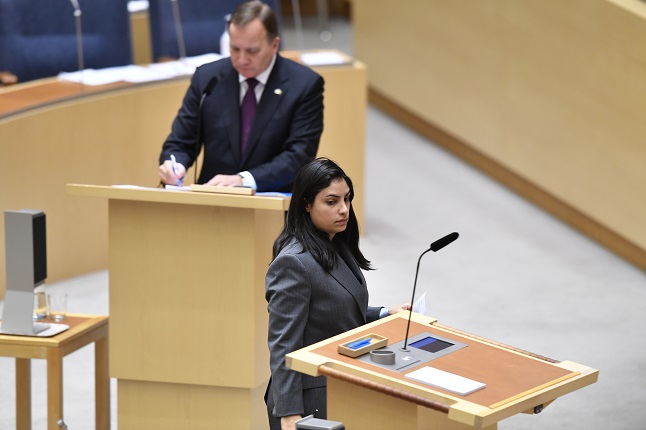 Stefan Löfven, Prime Minister and Leader of the Social Democrats

Sweden’s Social Democrat Prime Minister has been in the role since 2014, and came into politics after heading up one of Sweden’s most powerful trade unions, following a career as a welder.

The key thing to know about Löfven is that he’s known for his negotiation skills, and he’s had ample opportunity to flex them during his tenure.

Just months after taking power, his party failed to push its budget through, and Löfven called a snap election, but this was cancelled after crisis talks. In the next election in 2018, his party got its worst result in over a century, and it took four months of negotiations before a new government was put together. Still, Löfven remained at the helm. His government also holds the record for the most votes of no confidence, having survived six since the 2014 election. Can he continue holding on in the face of the latest challenge? Nooshi Dadgostar is only seven months into the job after taking over from Jonas Sjöstedt in October, and she is the one who first issued the government a firm ultimatum with the threat of a no-confidence vote. Having been involved with the party since her teens, she has had a particular focus on the issue of housing which is what the current no-confidence vote revolves around.

The Left Party has never served in government but usually offers support to Social Democrat governments whenever they are in power. But when Löfven offered significant policy influence to the Centre and Liberal parties in exchange for their support, the Left Party at first said it would not support the government, and even after agreeing to do so, Sjöstedt made it clear the party considered itself “the left-wing opposition” rather than a supporter of the government.

Dadgostar has also stood firm on that, issuing Löfven an ultimatum over a bill on introducing market rates, saying that if the government did not either scrap the bill or negotiate with the Swedish Tenants’ Association within 48 hours, her party would work towards a vote of no confidence. Even though the government said it would talk to the Tenants’ Association (which it has to do anyway as part of the consultation process through which bills become law), Dadgostar held firm. She said that talking wasn’t enough; she wanted the proposal to be sent back to the drawing table for hard negotiations. Like Dadgostar, Åkesson has been involved with politics since his teens, but that’s where the similarities end – until now.

Åkesson took over leadership of the nationalist Sweden Democrats, which evolved from far-right organisations with neo-Nazi roots, and has worked to tone down its associations with racism, although tighter restrictions on immigration remains its core focus. Under Åkesson’s leadership, the party took a record 12.9 percent of the vote in the 2014 election, which increased to 17.5 percent four years later.

This growing vote share has caused ripples through the political landscape, forcing the centre-left government to accept support and policy influence (including on the introduction of market rents) from the right-of-centre opposition parties.

Long frozen out of Swedish politics, the Sweden Democrats have recently received increasing cooperation from the Christian Democrats, Moderates and Liberals, with all four recently submitting a joint migration policy to the parliament to oppose the one proposed by the government.

The Left Party did not on its own have enough MPs to submit a no-confidence motion, and refused to cooperate with the Sweden Democrats on it. Åkesson’s party however does have enough MPs, and now plans to put forward the vote itself. The above politicians may be the ones who stoked the fire, but how will this crisis get solved? This is Sweden, so of course the answer is “probably over fika“.

Andreas Norlén is the parliamentary speaker, usually a low-profile role but one which comes into its own in moments of crisis. If the no-confidence vote succeeds, one possibility is that Norlén will start a talmansrunda, the political process where the speaker holds talks with all party leaders to work out who’s got the best chance at forming a government.

This happened not so long ago after the 2018 elections left neither bloc with a clear majority. Several rounds of talmansrunda took place in the four months it took to form a government, with news columnists analysing every detail down to the different pastries Norlén served to each party leader, one of whom brought home-baked cinnamon buns as a contribution to the talks.

Norlén is a member of the Moderate Party, which is unusual since the speaker usually comes from Sweden’s largest political party or bloc. This is another consequence of the increasingly fractured political landscape; at the time of the 2018 election, the centre-right bloc comprising the Moderates, Christian Democrats, Centre and Liberal Parties would not accept the support of the Sweden Democrats to form a government, leaving them without a majority, because this would have required cooperating with them on policy. But because the Sweden Democrats preferred the right-of-centre speaker candidate to the centre-left candidate, the Moderate candidate was named speaker. Andreas Norlén’s fika with Löfven during one of the 2018 talmansrunda. Photo: Henrik Montgomery/TT

Tune in to The Local’s Sweden in Focus podcast on Saturday, where we’ll be talking about the government crisis.