Fa caldo! – It’s hot! This is the phrase you’ll likely hear the most when Italians discuss the weather and your easiest go-to if you want to say that it is, in fact, very hot.

Che calura! – What heat! If it’s one of those intense, hot and heavy days, maybe what you’d describe as a sultry or muggy heat, this is the ideal phrase to whip out. It may be used to describe a day in which there’s a hot-humid air known as ‘Afa‘.

Un caldo della Madonna! – A heat of the Madonna! Where in English, you might use religious figures to express how hot you are, like ‘Jesus, it’s hot!’, in Italian you refer to the Virgin Mary to say it’s scorching. If you hear this phrase, the person wants to emphasise it’s really, really hot.

Yes, it’s blasphemy in a Catholic country, but you’ll hear Italians say it a lot anyway.

Heat-related Italian phrases has unearthed this absolute cracker. Needed this laugh today – un caldo della Madonna!! (holds picture up of the Virgin Mary repeatedly – both out of focus).https://t.co/10ma8pQyAO

Un caldo bestiale! – A brutal heat! When the sun is beating down on you and it feels deadly, this is the appropriate phrase for your word-bank. ‘Bestiale‘ can be translated as brutal, savage, terrible and most obviously, beastly.

When there’s just no respite from the sun’s rays, you’d be right to say, ‘Fa un caldo bestiale!‘ as you mop your brow.

Fa un caldo cane! – It’s dog hot! Dogs are used for emphasis in both Italian and English. You might say ‘I’m dog tired’ to emphasise how worn out you are in English, but man’s best friend is evoked to emphasise how hot it is in Italian.

And not just warm, but absolutely sweltering. So it’s not got anything to do with dogs per se, but instead is a polite way of saying you’re really very hot. They use the same idiomatic expression when it’s cold too –  ‘fa un freddo cane‘ means it’s freezing cold, or ‘it’s dog cold!’.

Mi sudano le mutande! – My underpants are sweating! This one paints a probably too vivid picture. It’s so hot that even your smalls are sweating. It might not be the most polite phrase to use with people you’ve just met and are passing the time of day with. But if you’re on closer terms, it might raise a smile if you reply with this phrase when someone casually says, ‘It’s hot today, isn’t it?’. ‘Fa caldo oggi, no?’. ‘Caldo? Mi sudano le mutande!‘.

Sto facendo la schiuma! – I’m foaming! Another visually-laden phrase, which means it’s so hot that you’re foaming up, just like a frothy cappuccino. It’s not nearly as tasty as a breakfast coffee though, as this saying conjures up images of your body whipping up your sweaty bits into a foam. Delicious.

Si cuoce dal caldo/sto cuocendo! – You cook in the heat/I’m cooking! Just like a sausage on a grill, that’s how Italian summers can make you feel. If you want to really give some oomph to your comment about the heat, this saying compares temperatures with oven-like heat.

READ ALSO: Temperatures up to 40 degrees and ‘violent’ storms forecast across Italy this weekend

Mi sto arrostendo sotto il sole! – I’m roasting in the sun! More cooking imagery to describe unbearable heat. If you feel like a roast chicken on a spit, this one is the ideal phrase to add some extra flavour to your conversations about the weather.

Si può friggere un uovo sul cofano della macchina! – You could fry an egg on the bonnet of a car! As temperatures soar, this phrase really shows just how high the mercury is rising.

You might say you could fry an egg on the pavement in English, which you might also hear in Italian – ‘si può friggere un uovo sul marciapiede‘. 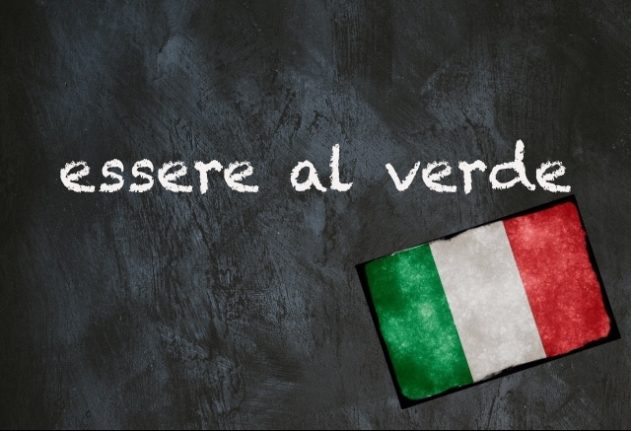 Who hasn’t at least once in their life opened their online banking app and stared with absolute dread at the balance, wondering how on earth they managed to squander away their savings in the space of a week?

If it’s any comfort, it happens to the best of us and we are definitely not here to judge.

But let us not stray from the purpose of this article, which is to teach you the Italian way to say that you’re stone broke. So, the next time you’re as poor as a church mouse, you can share the news with linguistic richness, at least.

One of, if not the, most popular Italian idiom on the subject is ‘essere al verde’, which can be roughly translated to ‘being at the green’. Naturally, any possible use of the expression requires the speaker to properly conjugate the verb ‘to be’ (‘essere’), as in the following instances:

A: I’m sorry. I’m running low on funds. Next time.

A: No and I don’t care that you’re feeling the pinch.

As you can see from the above examples, the expression is mostly used in informal, ordinary conversations, though it is sometimes used in published pieces of work, especially in rather humorous and/or provocative newspaper articles and comic books.

– Surely, the Carroccio’s finances are strained at the moment.

Now that you have a basic grasp of how to use the expression, you might be wondering where ‘essere al verde’ came from.

You might actually be puzzled as to why Italians associate the colour green with being penniless seeing as, in the English-speaking world, the most popular hue for such delicate matters is red.

Well, much like many other Italian idioms, ‘essere al verde’ originated from a pretty interesting ancient custom. In Renaissance-era Florence, wax candles whose bottom ends had been painted green were used to time public auctions. The latter were officially declared finished as soon as the candle would be ‘at the green’ (‘al verde’).

Over time, the expression ‘al verde’ made its way out of Tuscan auction houses and became extremely popular all across the country as a way to say that someone was running low on something. For instance, if an army was ‘al verde di soldati’, it had very few soldiers left among its ranks.

Eventually, the expression was also applied to personal finances – or, I should say, the dearth thereof. ‘Essere al verde di denari’ (i.e. ‘having little money left’) quickly became a widely used colloquial idiom and that’s precisely the lexical form that has made it all the way into modern Italian.

These days, native speakers are far more likely to use the shortened version of the expression (‘essere al verde’) rather than the full-length one (‘essere al verde di denari/soldi’) because, well, who likes to be long-winded when being strapped for cash?