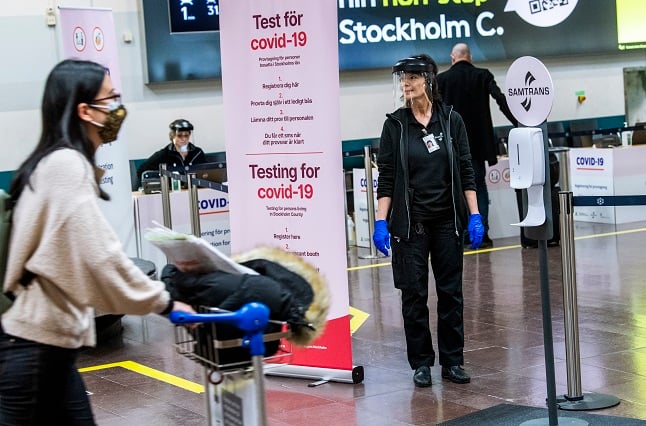 It will be possible to get Sweden's vaccine pass from the start of July. Photo: Claudio Bresciani/TT

The vaccine pass will be in place across the EU from July 1st, meaning that travellers who are vaccinated can use this to avoid other restrictions within the EU such as requirements for negative tests or quarantine.

In order to get the Swedish version, you will be able to apply for the pass from July 1st at the website www.covidbevis.se. This requires a digital ID, such as BankID, but the website will also have instructions on how to apply using a paper form, for people without the digital ID.

At a government press conference announcing the developments, ministers emphasised that although the pass will facilitate free movement within the EU, it is still important for all travellers to research rules and restrictions in their destination country before departure.

To begin with, the pass will only show whether or not you have been vaccinated against Covid-19, and how many doses of the vaccine you have received – it is up to each individual country to decide if they will accept travellers with both doses or only one. In the future, the eHealth Agency plans to expand the system so that the pass can also show a recent Covid-19 test result or proof of recently catching and recovering from the disease. Health and Social Affairs Minister Lena Hallengren said these should be added in by around mid-July.

The Local’s editor Emma Löfgren asked if people vaccinated in Sweden who do not have a personnummer will get the pass.

We asked what applies to people without either number, who are given a reserve number rather than either of the other two, but could not get an immediate clarification. Ålenius said reserve numbers are given out on a regional level and are not part of a central system, so this would be examined in future weeks. “We’ll take this question on board and get back to you,” she said.

People who have received one vaccine dose overseas and the second in Sweden will be eligible for the pass, and the key thing is to make sure the vaccine provider is aware of your first dose when you get it (you should take the documentation you have, showing the type of vaccine you received) so that your second dose is marked as such.

But when it comes to Swedish residents who received both their doses outside the EU, Ålenius said Sweden had not yet taken a decision on whether vaccine passes would be issued to these people.

“We will have to come back to this issue, let me just say that if one has been vaccinated abroad they most likely will have systems in place there to facilitate this. We will return to the issue,” said Health and Social Affairs Minister Lena Hallengren, who added that the pass would only be issued to people who had been given those vaccines also approved for use in the EU.