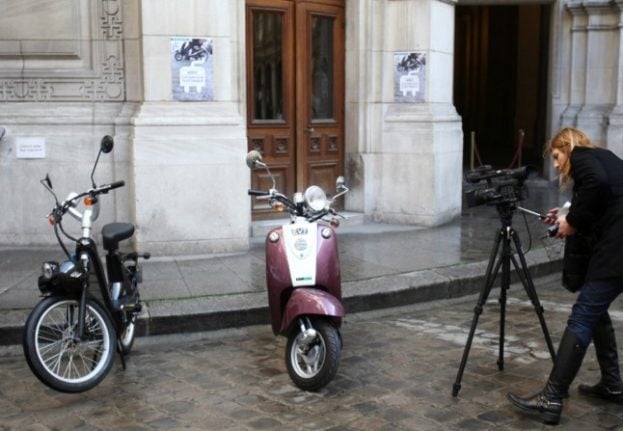 Deputy mayor David Belliard, a member of the Green party, said the two-wheelers could use marked car parking spots and rates would be half of those charged to automobile owners.

At their current level, this would translate into €2 per hour of street parking in the centre of Paris for motorcycles, falling to €1.20 nearer the outskirts.

READ ALSO Central Paris could be almost car free by 2022

Some 100,000 people ride their motorbike or scooters every day in Paris, according to Le Parisien newspaper.

Electric vehicles, including e-scooters, will continue to park free in the French capital, Belliard said.

Paris will also add around 5,000 dedicated parking spots for motorcycles and scooters to the current 40,000, Belliard said.

Pavement parking, a major headache in a city with mostly narrow sidewalks, will still be banned, he said, warning that police would “severely” sanction offenders.

Last month, she announced that car traffic would be drastically reduced in the heart of Paris next year, the latest step in her goal of greening one of the densest urban landscapes in Europe.

The plan would ban most vehicles from the Paris Centre district, formerly the first four arrondissements of the capital, that includes the two islands on the Seine river and the winding narrow streets of the Marais.

Critics blame her anti-car policies for traffic headaches for residents and for people living in suburbs lacking viable public transport options for getting to work in the city.

Belliard also said on Tuesday that the city would convert half the capital’s roughly 65,000 car parking spots into cycling paths, green areas and terraces, or use the space to widen pavements.

But disabled motorists, car sharers, delivery workers and taxis will get more dedicated parking spaces than now, he said.