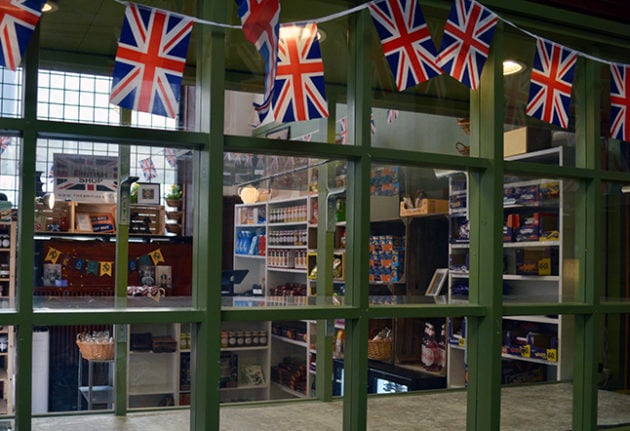 The British Shop in Gothenburg is still waiting for stock. Photo: Rosie McClune

There was nothing wrong with the food, but it came from the UK and according to post-Brexit EU regulations, any consignment of food from outside the European Union has to undergo document and identity checks in customs before being allowed to enter an EU country.

Due to an error in how the pallets were marked, (they weren’t marked with ‘border control’) the food was moved to a warehouse without being approved by customs at the port.

The business who bought the shipment, The British Shop in Gothenburg, was given two options: either destroy the entire shipment or send it back to the UK. They are just one of the small businesses affected by a lack of information on post-Brexit imports.

“We knew [Brexit] was going to be tough but it’s just been impossible to get anything done,”  said Rosie McClune, one of the owners of the shop.

“Usually an order would take five days and now it’ll take five weeks to get here,” McClune told The Local. The shop was expecting the delivery on May 24th.

The British treats and condiments they sell are very popular with the English-speaking immigrant community in Gothenburg. But lack of stock meant the shop had to close over the weekend.

After waiting five weeks and hiring customs agents to make sure all the paperwork is in order, the shop still hasn’t been able to receive their goods and shelves are getting emptier.

A recent survey from the Confederation of Swedish Enterprise (Svenskt Näringsliv) found that 80 percent of Swedish companies which trade with the UK have had or expect problems with post-Brexit bureaucracy.

More than 40 percent of the companies said they’ve experienced or expect major problems with customs duties.

Henrik Isakson, manager for trade policy at the Confederation of Swedish Enterprise, said that “it’s all about people in the end, who might interpret legislation in different ways.”

It’s nothing new that businesses are struggling because of Brexit, but this situation is “just a big shit-show,” as McClune put it. Even the Queen is disgruntled by the lack of tea available on shelves at The British Shop in Gothenburg. Photo: Rosie McClune.

The shop has had to reach out to the British Ambassador for help. While McClune says that the Embassy has been really helpful, she said the Swedish administrators don’t know the new rules.

“This just can’t go on, not just for us but for everyone,” McClune said. “It’s just so stupid the whole thing. I hate Brexit.”

“If consignments with food products are entering the EU territory without the mandatory border controls, the only option is a rejection of the consignment,” she said.

Sundström couldn’t comment on this particular case but told The Local that it’s very important that anyone planning on importing products from the UK to the EU, “informs themselves in detail about the rules before they order goods.”

Unless you’re fluent in EU trade policy jargon and laws, the information available on the Swedish Food Agency website is quite hard to digest. Certain links are broken and information isn’t always current.

“They don’t have a clue and neither do we,” McClune says. “They assume everybody is up on the lingo.”

Even the experts struggle.

Christopher Wingård from Sweden’s National Board of Trade says that the transition has been anything but smooth. “The first couple of months since Brexit have been very difficult for many companies, both in Sweden and in the UK. Since the agreement came late on Christmas Eve, there was essentially no time to prepare, for anyone,” he told The Local.

“When everyone is faced with an entirely new situation on a short notice, it is not surprising that there are issues,” Wingård added.

He says that smaller businesses have been hit harder.

“The EU rules for importing food are very strict and difficult to deal with, especially for small and medium sized companies,” he said.

It takes a while of digging through the website of the Swedish National Board of Trade (Kommerskollegium) to find out what rules apply. Non-EU goods need to be pre-registered before they arrive and before the rules changed in April, you needed an export health certificate for foods that contain animal by-products. Now, instead, you need to provide private attestations for those products.

Most of the snacks The British Shop are currently trying to import contain a very small percentage of dried milk or egg product – some as little as 0.35 percent – but they still count as composite products of animal origin.

As a result, the Swedish Food Agency has asked them to complete private attestation forms on the origins of each individual ingredient before the shipment can be released. A screenshot of the attestation certification shows how detailed and lengthy the process can be. Photo: Screenshot

The EU is trying to make the process easier to understand with a website that lets you find the rules for a certain product, but it’s still quite cumbersome.

Each certificate is long and costs 1000 kronor to submit. Some of the details border on the ridiculous.

“One of the questions is actually ‘please provide proof there’s no milk in this marmalade’,” McClune said.

She hopes that importing from Ireland might be a way to avoid the complex bureaucracy of ordering crisps and chocolate from Britain, but it’s more expensive and they can’t get all their customers’ favourite products.

At the time of writing, the shipment was still at the port as McClune and her colleagues try to handle the mountain of paperwork, but they hope it will be released in the next few days.

In the meantime, they still have an empty shop.

The company did not specify where the cuts will be made.

“In hindsight, I was too ambitious in investing ahead of our revenue growth. And for this reason, today, we are reducing our employee base by about  six percent across the company,” Spotify chief executive Daniel Ek said on Spotify’s official blog.

“I take full accountability for the moves that got us here today,” Ek added.

The 39-year-old CEO added that over the next several hours “one-on-one conversations will take place with all impacted employees.”

He said HR business partners are working with employees whose immigration status is connected with their employment.

Shares in the Sweden-based company, which is listed on the New York Stock Exchange, rose over 4.5 percent following the announcement in out-of-hours trading.

Spotify has invested heavily since its launch to fuel growth with expansions into new markets and, in later years, exclusive content such as podcasts.

It has invested over a billion dollars into podcasts alone and raised hackles last year as it signed a $100 million multi-year deal with controversial star podcaster Joe Rogan.

The company has never posted a full-year net profit despite its success in the online music market.

It planned to reach 479 million monthly active users by the end of 2022, including 202 million paying subscribers and is targeting one billion users by 2030.

“While I believe this decision is right for Spotify, I understand that with our historic focus on growth, many of you will view this as a shift in our culture,” Ek said.

To offer perspective, Ek noted that the growth of the company’s operating expenditure had outpaced revenue growth by a factor of two.

“That would have been unsustainable long-term in any climate, but with a challenging macro environment, it would be even more difficult to close the gap,” Ek said.

Reporting its third quarter earnings in October, Spotify said it had 456 million monthly active users, of which 195 million were paying subscribers – who account for the majority of Spotify’s income.

In recent months, tech giants such as Google parent company Alphabet, Facebook-owner Meta, Amazon and Microsoft have announced tens of thousands of job cuts as the sector faces economic headwinds.

On Friday, Alphabet announced it would cut 12,000 positions, just a day after Microsoft announced a cut of 10,000.

The cuts in the tech sector follow a major hiring spree during the height of the coronavirus pandemic when companies scrambled to meet demand as people went online for work, school and entertainment.