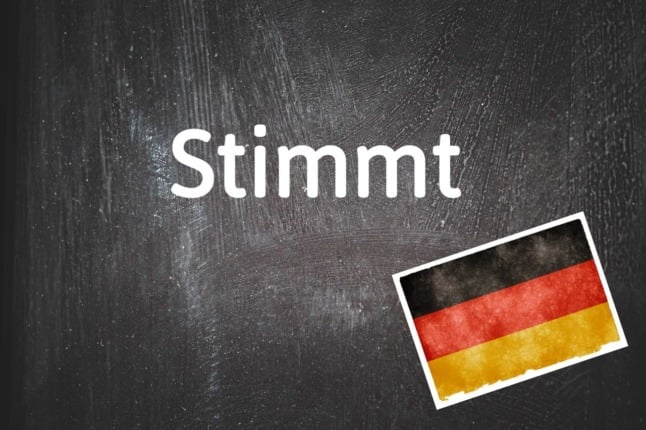 Stimmt is often used to affirm a statement. It means ‘agreed’ or ‘that’s right’ so it is very useful in conversational German to show that you are attentive and following along with a discussion.

As a verb, stimmen has a seemingly unending list of meanings, and you might be surprised to see it crop up almost everywhere, from political campaigns to music lessons.

READ ALSO: 10 ways of speaking German you’ll only ever pick up on the street

When used to show agreement, stimmen means to be true, but it can also mean to vote in an election, to tune (an instrument), and to add up.

You will most likely hear this word used on its own as a response, or in short phrases like das stimmt (that’s right) and stimmt das? (is that right?). It also features in the very useful phrase stimmt so, which you can say to waiting staff in cafés and restaurants to let them know they can keep the change when paying the bill.

There are jokes that genau (simply meaning ‘exactly’) is one of the most overused words in Germany, particularly by those who are not overly confident with their ability to form more complicated ideas in German, but stimmt certainly gives it a run for its money.

It is a good way to keep a conversation going, even if you are not completely sure what’s being said.

Though stimmt is quite colloquial and would not be found too often in written German, it would not be uncommon to hear it in formal conversation. The word really is so versatile that it can be used in almost every setting, from the most casual interaction with friends to a high-stakes business meeting.

In any case, we should leave as early as we can to avoid traffic. – Agreed!

If that’s really true, then we’re in trouble! 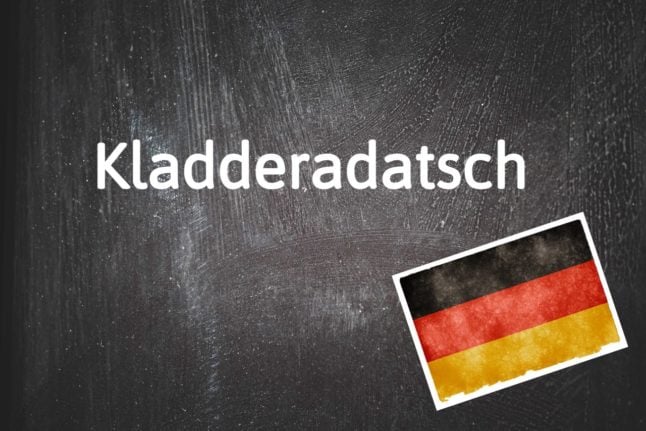 The German language is full of wonderful words that don’t have a true English translation: a personal favourite is Verschlimmbessern, which means to try and improve a situation only to end up making it worse. Der Kladderadatsch is another word which defies simple translation, meaning something like “unholy mess” or “clutter”, but also “chaos”,  “collapse”, or “crash”.

The reason for this slightly strange combination of meanings is that Kladderadatsch is onomatopoeic: it describes the sound that disorganised things make. When the word is used to describe a crash, an English onomatopoeic equivalent would probably be “kerblam!” or something similar. When you’re explaining that your bedroom is a mess, however, you’re most likely instead hoping to convey the idea of clutter – not that your laundry is making a “kerblam” noise!

In a political sense, Kladderadatsch can also mean a particularly messy scandal.

Although Kladderadatsch can most likely trace its origin back to early 19th century Berlin, the word only became particularly popular following the first publication of a satirical magazine called Kladderadatsch in 1848. This magazine, published weekly from 1848 until 1944, was born out of the radical student protests of the time, which many believed were the signs of the old political system collapsing.

According to legend, the founders of the magazine – Albert Hofmann and David Kalisch – came up with the name after watching a dog jump up onto a tavern table, knocking over bottles and glasses alike. Watching the chaos before them, they recognised the parallels with their political times, and so Kladderadatsch was christened.

I threw the whole mess into the rubbish

There was a big scandal in our town because of it

His businesses ended in a big ‘crash!’