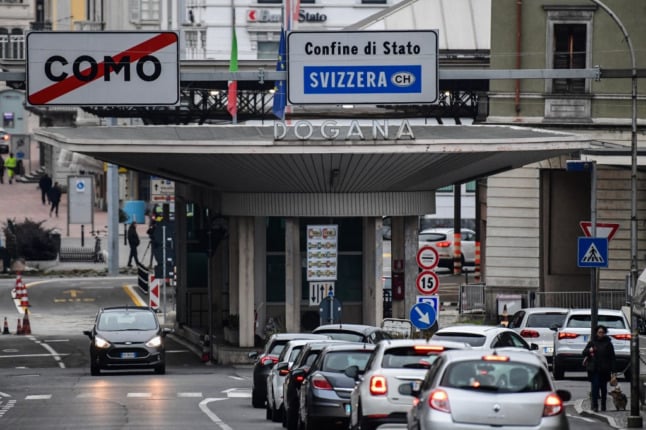 Despite a recent reform effort, taxpayers who reside abroad and earn income in Switzerland will be able to continue to claim social deductions both in Switzerland and in their home countries.

Current Swiss law obliges cantons to take into account a deduction for family expenses when calculating withholding tax for non-residents.

In June, conservative Ticino MP Marco Chiesa (SVP) presented a motion to the Council of States, the lower house of the parliament, to end this practice.

Chiesa argued that tax deductions for children, or young people who are in apprenticeship or at university, are already granted in the taxpayer’s home country.

However, on Wednesday, the majority of deputies rejected this proposal.

This means the current system of taxation imposed on non-resident foreigners who are employed in Switzerland, including an estimated 340,000 cross-border workers, will remain unchanged for the time being.

READ MORE: Reader question: Can I deduct working-from-home costs from my Swiss taxes?

What are the tax rules for cross-border employees in Switzerland?

An agreement between Switzerland and France, Italy, and Germany authorises cantons to subtract withholding tax (also known as taxation at source) from cross-border workers’ wages.

This system is different from the one used by resident workers, who declare their income and pay taxes in monthly instalments throughout the year.

The taxes that cross-border workers pay in Switzerland are deducted from their tax liability in their country of residence.

To determine the withholding tax rate, the total gross income from all employment, including supplementary earnings such as benefits from invalidity or accident insurance, are calculated.

Employers then forward the levied amounts to cantonal tax authorities.

This tax system applies only to G-permit border workers and foreigners who are not permanent residents.

This is how it works by country of residence:

The tax agreement signed between Bern and Rome in December 2020 distinguishes between “new” and “old” cross-border commuters. For those who start working in Switzerland after the agreement enters into force, the withholding tax rate will be 80 percent in favour of Switzerland, instead of the 70 currently.

Under the taxation regime currently in place, permit G holders who work in cantons other than Geneva have their taxes collected by French authorities.

But if their place of employment is Geneva, taxes are paid in Switzerland.

Since 2019, a ‘day-count’ method is used to determine taxation of border workers.

This relates to 60 ‘non-return days’, defined as a day when the workers can’t return to Germany due to professional duties in Switzerland.

If the 60-day limit is not exceeded, the workers pay taxes in Germany. If it is, employees are subject to the Swiss withholding taxes system.

What about changes to the system?

Some tax changes were introduced in 2021.

Switzerland’s new law on taxation at source is intended to ensure compliance with rules stipulated in the EU/EFTA agreement on the free movement of persons.

Most specifically, its aim is to eliminate disparities in treatment between workers subjected to withholding tax and those under the ordinary taxation regime.

Also, the cantons will be required to standardise the calculation of withholding taxes throughout Switzerland.

Do all of the collected taxes stay in Switzerland?

While most of this money does remain in Switzerland, a portion is paid to the employees’ respective countries of residence or regional authorities there.

This is how much tax Switzerland pays to workers’ home countries:

In 2020, Geneva paid 315 million francs from 2019 taxes to the French departments from where some 87,000 workers commute to their jobs in the canton each day.

Under the deal worked out in 1973, 3.5 percent of the tax collected from cross-border workers goes to France, with 76 percent of that total transferred to Haute-Savoie and the rest to Ain — the two regions from which most workers commute to Geneva.

This sum is intended to compensate for the public charges incurred by cross-border workers in their French municipalities. The funds are supposed to be used for infrastructure projects of regional importance, in particular those managing mobility on both sides of the border.

Also in 2020, Ticino authorities had paid of nearly 90 million francs to Italy, collected from approximately 67,000 frontier workers employed in the canton.

Will the failure of negotiations between Switzerland and the European Union impact taxation of border workers?

The full extent of repercussions is not yet known, including on taxes.

However, in a broader sense there is concern in the border cantons that Switzerland’s decision to abandon the bilateral talks will influence their ability to employ G-permit frontier workers.

“Breaking off the negotiations is really problematic for us”, Serge dal Busco, the vice-president Geneva’s government said in an interview with Swiss media.

READ MORE: What impact could the Swiss-EU stalemate have on cross-border workers?

When you move to a new country, including Switzerland, you have to look for a whole new network of professionals.

You may or may not have immediate need for the proverbial butcher, baker, and the candlestick maker, but sooner or later you will have to find other professionals, with the most essential one being a doctor.

READ MORE: What you should know about finding a doctor in Switzerland

Chances are you will also need, at one time or another, a legal counsel. That should in principle not be a problem as Switzerland has an abundance of lawyers — 7,317 currently practicing in the country, according to European data.

The question of how to find one that best suits your needs depends on many factors — for instance, what kind of legal advice you are seeking (estate planning, inheritance, divorce, etc), whether you speak the language of your region or need an English-speaking attorney,  and whether you can pay (the often exorbitant) fees, or need free counselling instead.

Speaking of fees, the hourly rates vary widely from one lawyer or legal practice to another, with some charging as little as 100 francs or as much as 1,000.

Much depends on the lawyer’s location — with the ones practicing in large cities like Zurich and Geneva being more expensive than their counterparts in small towns or rural regions  — the area of specialisation and general reputation — the more prominent the attorney is with a roster of famous or well-heeled clients, the higher fees they will typically charge.

An important thing to know is that, depending on the advice you are seeking, you may not need a lawyer at all, but rather a public notary; in Switzerland, these professionals perform many tasks that only attorneys can do in other countries, such as drawing contracts and establishing other legal documents.

Here are some tips on how to find a lawyer or a notary that best fits your needs:

As with any other services, personal recommendations from people you know and trust are best.

This will spare you the effort of “investigating” the person, such as researching their credentials and feedback from previous clients — the due diligence process that everyone should undertake before hiring any professional.

If you don’t know anyone who can recommend an attorney, do your own research.

Professional organisations such as the Swiss Bar Association (SBA) and the Swiss Federation of Notaries are good resources, as they both allow you to look for professionals in or near your place of residence.

Many Swiss lawyers and notaries, especially those practicing in large urban centres where many foreign residents live, speak English.

But if you want to make sure yours does, the UK government put together a list of English speaking attorneys in Switzerland, which should help you with your search.

In principle, all legal assistance comes at a cost, except for exceptional cases, which are defined by each canton.

SBA has a canton-by-canton list, where the designation “GRATIS JUDICATURE” stands for “free legal advice”.

However, there is also such a thing in Switzerland as “legal protection insurance” (Rechtsschutzversicherungen in German, protection juridique in French, and protezione giuridica in Italian).

It covers attorney and other associated fees if you undertake court action against someone, are sued, or simply need legal advice.

There are two different types of legal protection insurance — one specifically for traffic accidents and the other for all other matters. Sometimes they are combined.

The annual cost of this insurance, which you can purchase from practically every carrier in Switzerland, is minimal, especially if you consider how much you’d have to spend if you hired an attorney yourself.

Another benefit of these policies is that a lawyer will be assigned to you by the insurance company so you won’t have the headache of looking for one on your own.

This article provides more information about this insurance: