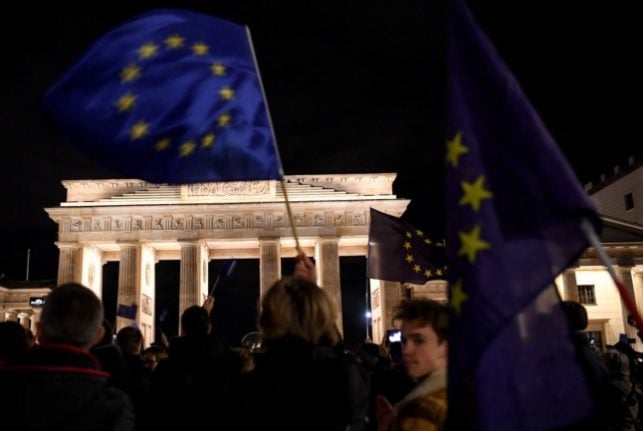 People standing at the Brandenburg Gate in Berlin after the UK left the EU on January 31st 2020. Photo: picture alliance/dpa/dpa-Zentralbild | Britta Pedersen

Any Britons who were living in Germany before December 31st 2020 should notify their local Ausländerbehörde so they can get a residence document, experts have advised.

Under the Brexit Withdrawal agreement, Brits who were legally resident in Germany before the end of the transition period have the right to continue living here.

However, they should apply for a residence document (Aufenthaltsdokument-GB). To get this, Brits should report to their local foreigners authority (usually called Ausländerbehörde) by June 30th 2021.

While Britons’ rights under the Withdrawal Agreement will not be affected if they miss the deadline, experts recommend that they apply for the new card as soon as possible. It can provide proof of the right to carry on living and working in Germany when needed. For example when travelling or applying for a job.

Matt Bristow, of citizens’ rights group British in Germany, told the Local: “British citizens in Germany – and their non-EU family members – should notify their local Ausländerbehörde of their residence in the country ASAP and to request that they are issued with an Aufenthaltsdokument-GB.

“This can then be used as official evidence that you were living in Germany before the end of the Brexit transition period and have rights under the Withdrawal Agreement.”

Process depends on where you live

Bristow pointed out that there are different systems in place across Germany for getting the residence document.

Some areas have written to British citizens to inform them of what to do, others require people to take action themselves and report their residence to the immigration office.

“If you have friends, family or neighbours who are British, check that they know what to do and who they need to contact.

“Particularly vulnerable groups or people who aren’t online very often may not have even realised that there is anything for them to do – at British in Germany e.V. we’ve heard examples of just this in recent days.

“It is unclear how many people have already been in touch with their Ausländerbehörde or received their card, so it is impossible to know at the moment how many people might not have yet realised that there is anything for them to do.”

Anyone in doubt should call up their immigration office – or search for information on official local government websites – to see what steps should be taken.

Unlike some other EU countries, Germany chose a so-called declaratory system.

“This means that you do not have to apply for your rights: if you are in scope of the Withdrawal Agreement, then you already have your rights by force of law,” said Bristow.

“Getting an Aufenthaltsdokument-GB does not change the rights you have, nor does the card itself give you these rights. However, the card is the best possible evidence that you are covered by the Withdrawal Agreement and you will be expected to be able to prove this from time to time – eg at the border or by your employer. Having one will make your life a whole lot easier.”

READ ALSO: Britons in Europe face Brexit deadlines with many yet to apply for residency

If you have British friends or family in 🇫🇷🇱🇺🇱🇻🇲🇹 or 🇳🇱 make sure they apply for residency before the 30 June deadline.

Remember, in 🇩🇪 it isn’t an application – your rights are guaranteed if you’re covered by the WA. But do register with the Ausländerbehörde by the end of June. https://t.co/cOA28wHxsT

What if Brits don’t have a card by June 30th?

Even though the German government has asked British people to notify their local Ausländerbehörde of their residence by June 30th, experts say people shouldn’t panic if they haven’t had their meeting with the immigration office by then – or received their card.

“Try not to worry if you haven’t received the actual card by then. In quite a few areas it will take many months to process everyone’s requests for the new card and then it can take 6-8 weeks for the card to be printed,” said Bristow.

He added that people may be able to get a temporary certificate – a Fiktionsbescheinigung – as proof of their status if they need it. For example, this could be beneficial if people have to travel for work a lot.

The British in Germany e.V. website has put together a guide on what people need to do if they want further information or support if they encounter difficulties.

Bristow added that people in Germany who have British friends or family living elsewhere in the EU, EEC or Switzerland should check they know their rights.

“In some other countries, British citizens must apply for a new status before a deadline and if they don’t they will lose all their rights under the Withdrawal Agreement,” said Bristow.
“For example in France, Latvia, Luxembourg and Malta, the clock is ticking: British citizens must have applied for the right to stay in those countries by June 30th or face losing their status overnight.
Changes for Brits moving after Brexit

Before the Brexit transition ended on December 31st 2020, Brits were able to move to Germany and only needed to register their address – like everyone living in the country, including Germans.

However, with the end of the Brexit transition period that era is over, and if you are British and planning to move Germany now, you require the same sort of paperwork that was always the rule for non-EU nationals like Americans, Canadians or Australians.

READ ALSO: Post-Brexit visa rules – How can Brits move to Germany in 2021 and beyond