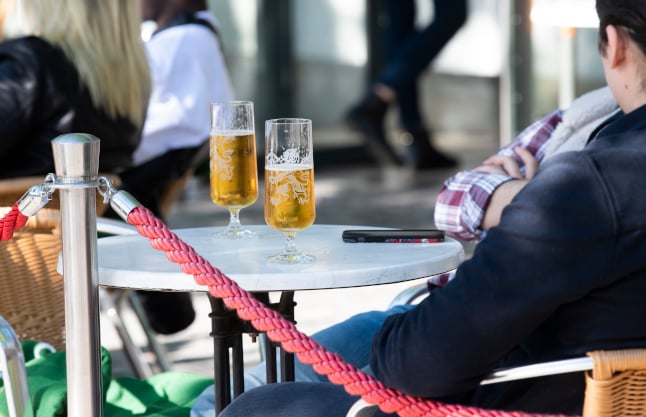 Bars and restaurants in Sweden will get longer opening hours. Photo: Fredrik Sandberg/TT

Some of the following decrees are issued by the government, and some by the Public Health Agency. Please note that all other pandemic restrictions and recommendations remain in place for now (here’s a list of when they will be lifted), so people are still asked to avoid crowding, socialise only with their close circle, wear face masks during rush hour on public transport, and work from home if possible.

A new category for running events and similar outdoor competitions where participants don’t tend to all congregate in the same place, such as orienteering, will be introduced and the limit on attendees for this category will be 150 people.

Note that the government also allows the Public Health Agency to decide on lower regional caps than the ones listed above if it believes it is necessary, so keep an eye on the specific rules and restrictions in your Swedish region before you organise any public events.

Flea markets and other similar markets have previously been classified as public events, which means they were unable to welcome more than eight people. This will no longer be the case. From today they will instead come under the same rules as shops, which only means that they need to follow certain rules to avoid crowding (for example ensure that each visitor has at least 10 square metres for themselves).

Permanent amusement parks will no longer have to follow the cap on visitors either. This means that places such as Liseberg, Gröna Lund, and Skara Sommarland will now instead follow rules that means they are allowed one person per 20 square metres.

The Public Health Agency will no longer be able to decide on local bans on visit to elderly care homes.

Small tournaments for children, indoor and outdoor, will be allowed.

Outdoor matches and competitions for adults will be allowed.

The advice on distance teaching for adult education is lifted (this means that universities will be allowed to return to on-campus teaching).

Bars, cafés and restaurants will be able to stay open until 10.30pm.

The rule that states that only one person is allowed per table at bars, restaurants and cafés that are part of a shopping centre is lifted.

As of today, people travelling from the EU, EEA, Schengen, the UK, Australia, Israel, New Zealand, Rwanda, Singapore, South Korea and Thailand are no longer asked to self-isolate for seven days or get a second test on the fifth day after arrival, as long as they don’t show symptoms of Covid-19 infection. Please note that the lifting of this recommendation does not affect the rules for travelling to Sweden – people travelling from the EU/EEA still have to show a negative Covid test to enter the country (unless they are covered by a series of exceptions), and travellers from non-EU countries are still banned from entering (again, there’s a long list of exceptions).

Catch up with Sweden’s five-step “reopening” plan in the following articles: