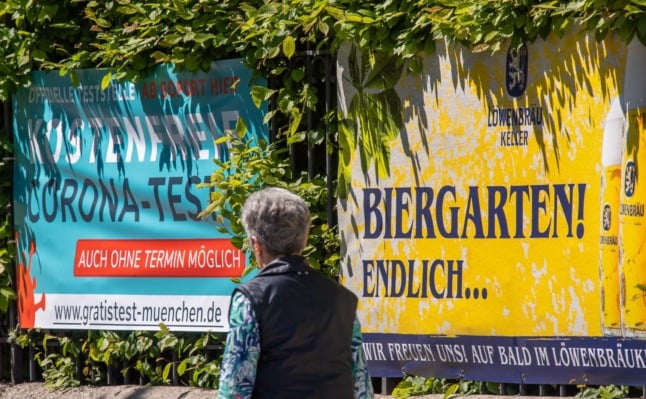 The number of new Covid cases per 100,000 residents has been steadily falling in Germany since the end of April. And the number of patients in intensive care units has also dropped significantly, while coronavirus deaths have fallen slightly.

This positive development has allowed districts and cities across the country to begin easing Covid restrictions and reopening more of public life after a shutdown was put in place in November 2020.

The Tagesspiegel newspaper analysed how Germany’s situation stacks up against a few other European countries to see how the country is doing, and with a view to possible summer travel. Here’s a look at what they found.

READ ALSO: How did Germany get Covid cases down and will the trend continue?

Experts say there are several reasons why Germany has seen a drop in Covid cases since the end of April, such as measures being tightened, public behaviour changing, and better weather.

But it is striking how different the 7-day incidence rates are across Europe, including between Germany and neighbouring countries.

The vaccination rates, on the other hand, are not hugely different – with one well-known exception: the UK is miles ahead on its jab campaign.

However, Britain is also currently struggling with outbreaks concerning the virus variant first discovered in India. The UK is one of the few countries in Europe where the 7-day incidence is currently rising, albeit only slightly.

“We have the worst behind us and have reached the end of this difficult period,” said SPD health expert Karl Lauterbach over the weekend, regarding Germany’s situation.

However, it’s not just people in Germany who can (cautiously) get their hopes up for a good summer – it’s currently looking positive elsewhere.

The chart below by Our World in Data shows the Covid cases per million people to give an idea of the trends in four countries.

France is one of only a few countries in Europe with a 7-day incidence close to 100. This is mainly due to the country having to recover from a much higher third coronavirus wave, the Tagesspiegel analysis said.

While the number of new infections in Germany peaked at almost 30,000 at the end of April, in France more than 100,000 Covid infections were logged in mid-April – and keep in mind that Germany’s neighbor has around 16 million fewer inhabitants.

After the incidence hit 477 infections per 100,000 people in mid-April, it has been falling continuously since then and was 79 in the past week. After a brief increase to around 100, the incidence is now falling again.

READ ALSO: France opens Covid vaccines to everyone over 18

France and Germany are similar in terms of the number of deaths over the past seven days.

However, it could be that Germany sees a faster recovery because the number of coronavirus ICU patients is significantly higher in France at around 3,000.

In Germany there are now only 2,450 ICU patients, which is less than the German Interdisciplinary Association for Intensive Care and Emergency Medicine (DIVI) predicted. In their recent model, they predicted around 2,500 intensive care patients in Germany in mid-June.

The fact that the situation in Germany is a little more relaxed than in France is also due to the different progress of the vaccination campaign. While roughly the same number of people already have full vaccination protection in both countries, Germany is ahead with 43 percent of first doses compared to about 37 percent in France.

Since the first jab provides some protection against severe courses of Covid-19, the number of ICU patients and deaths in Germany may fluctuate less in future.

READ ALSO: Germany’s Covid case rate falls below the threshold of 50 for first time since October

Italy hit the third coronavirus wave peak in March – at an earlier stage than the likes of France and Germany. After rising to 269 cases per 100,000 people at the end of the month, the incidence has been falling continuously since then. Since the end of April, the decline in the number of infections in Italy and Germany has been around the same level.

The 7-day incidence is now also at a comparable level. The situation is similar with ICU patients and deaths, each in relation to the population.

In Italy, on the other hand, the proportion of positive tests of the total number of tests is significantly lower. However, this is also due to the fact that, as in France, significantly more tests have recently been carried out in Italy (an average of around 230,000 per day).

The vaccination rate in Italy is comparable to that in France, but slightly below that in Germany.

Britain is special in two ways. On one hand, the influence of the well-advanced inoculation campaign is reflected in the coronavirus numbers  – which is linked with independence as a result of Brexit (as the EU has tackled vaccination as a bloc rather than each country going alone). On the other hand, Britain has faced hurdles during the pandemic such as battling effects of new virus variants.

The 7-day incidence is probably higher due to the variant that first originated in India. In early January, the UK had an incidence of 630 cases per 100,000 people. With a strict lockdown and a huge early push on the vaccination campaign, the rate quickly fell below 100 by the end of February.

When the third wave started in Germany, the numbers in the UK slowly but steadily decreased. The temporary lowest number was reached in mid-May at 20 cases per 100,000 people, a month after it had opened extensively.

For the first time since the end of April, the number of new infections every day has risen to more than 3,000 in the past week, and even to more than 4,000 in a day. UK health experts say the slight growth could be the beginning of a new wave.

But, with all due caution, the other key figures continue to develop very well in Britain compared to the rest of Europe and also to Germany. While the incidence is at a similar level, the number of deaths – 9 on a weekly average – is very low. In Germany there are 149. The number of people in ICU wards is also low.

Meanwhile, the British continue to do a lot of testing, with almost a million swabs a day. Only 0.3 percent of them were positive.

The main reason for the UK’s good development has to be the vaccination campaign. A huge 58 percent of the British population have now had at least one shot, while more than a third have already been fully vaccinated.

German health expert Karl Lauterbach predicted weeks ago that the numbers in the UK would increase again slightly due to the variant. At the time, he said that in Britain it depends on whether the full vaccination rate can quickly rise to well over 60 percent – that is not the case yet.

“If the Indian variant spreads faster, the number of cases could rise again in some regions,” said Lauterbach.

So we’ll have to see how the UK’s push on vaccinating people in Covid hotspots, and mass testing, reacts with the variant outbreaks. It is hoped that the UK can avoid a large spread of new cases.

Germany acted quickly to tighten restrictions on travel from India, and later the UK when the outbreaks were discovered.

At the moment, the Indian variant only accounts for about two percent of all new Covid cases in Germany. But as more variants are emerging, countries, including Germany, will have to be on their guard and up the pace of vaccinations as much as possible.