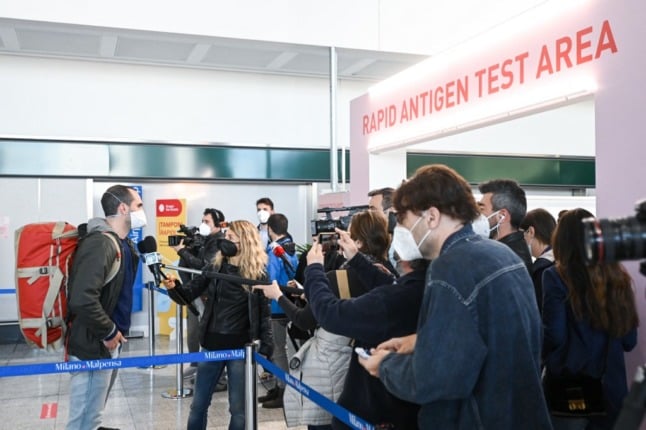 What rules do European countries have in place for travel from the UK? (Photo by Piero Cruciatti / AFP)

What is the latest announcement from the UK?

On Thursday July 8th the UK government announced that holidaymakers from England, specifically those who were vaccinated in the UK’s National Health Service, no longer have to quarantine on return from amber list countries if they are fully vaccinated.

The rule change will kick in on July 19th and could effectively open up tourism from England to Europe (European countries were all classed as amber as of July 8th) for fully vaccinated travellers. It was not clear whether Scotland, Wales and Northern Ireland would follow the lead and apply the same measure.

Travellers would still need to take a PCR test two days after returning to England. Full vaccination is classed by the UK as 14 days after the final dose.

Under 18s do not have to quarantine.

Does this also cover Brits living in Europe?

No. The rule change only covers those vaccinated under the NHS. So most Britons living abroad and indeed other foreign nationals who travel to the UK from amber countries would still be subject to quarantine and testing rules.

That means for the moment anyone travelling to the UK has to quarantine for 10 days and take PCR tests on day two and day eight.

However things could change. The UK’s Transport Minister Grant Shapps is expected to make a further announcement later this month on whether fully vaccinated travellers who were inoculated in certain countries, such as EU member states or the US can also skip quarantine.

The EU has the UK have been negotiating over the mutual recognition of Covid health passes, which would allow those vaccinated against Covid-19, those who have recovered or are able to show a recent negative test to skip quarantine and testing requirements.

Of course the rapid spread of the Delta variant in the UK might complicate those negotiations and force EU countries to impose new restrictions on UK travellers. So while the UK government has opened a way for tourism it doesn’t necessarily mean Europe is open for tourists from the UK

What rules are in place for UK travellers heading to Europe?

When the UK variant was detected last December, EU countries took a coordinated approach in an attempt to slow the spread, with the Italian health minister saying travel restrictions were needed while more studies on the new strain were carried out.

But this time, countries’ responses to the Delta strain, which was first identified in India, have varied much more.

France has placed the UK on the orange list of its traffic light travel system, which differentiates between vaccinated and unvaccinated travellers.

Unvaccinated travellers are mostly not allowed to travel to France, only travel for essential reasons and for French citizens or residents is allowed – find the full list of reasons HERE. They need a negative Covid test to enter and must quarantine for 7 days on arrival, although this can be done at home.

All travellers need to fill in a declaration stating that they have no Covid symptoms and have not been in contact with a Covid patient in the past 14 days? You can find the form HERE.

Germany classified the UK as a ‘virus variant area of concern’ in May and closed its borders to travellers from Britain over concerns about the Delta variant.

But on July 7th, Germany eased travel rules for the UK – along with four other countries where the Delta variant of Covid is widespread. The UK is now in the the ‘high incidence’ risk category.

People who are fully vaccinated or have recovered from Covid-19 coming from high incidence areas like the UK do not have to quarantine on arrival. They can also show their proof of vaccination/recovery before boarding a flight to Germany instead of a negative Covid test.

Everyone has to log proof of test, vaccination or record on Germany’s entry registration portal before travel.

The German government still warns against travel to high incidence areas, but there are no bans in place.

Austria has ended its ban on direct flights from the UK as of June 21st, however entry is limited to Austrian or European residents or citizens. In late June, Austria extended its ban on British arrivals until August 31st. More information is available here.

On July 2nd, the rules for UK travellers heading to Spain changed, requiring them to show either a negative Covid-19 test or a vaccination certificate.

An update from the Spanish Embassy in London was released on July 5th adding that Spanish and EU travellers and their families, as well as British residents in Spain could now enter Spain with an antigen test instead of the negative PCR, LAMP or TMA tests.

However, for British and other third-country citizens coming from the UK who are residents in the UK, antigen tests are not accepted.

Throughout June, travellers from the UK were able to enter Spain without the need to present a negative test or vaccination certificate.

READ MORE: Everything Brits need to know about travel to Spain under new rules in July 2021

Sweden has no specific guidance for travellers from the UK, but they are currently subject to an entry ban that applies to all non-EU countries. This means people can only enter Sweden from the UK if they meet two conditions: they must belong to a category exempt from the entry ban (including Swedish residents, EU citizens, and people travelling for essential reasons) and they also need to show a negative Covid-19 test no older than 48 hours (although there is a different list of exemptions from the test requirement, including Swedish residents).

Switzerland on June 25th allowed UK arrivals after a ban which lasted several months. Anyone arriving from the UK will need to have been vaccinated (within the past 12 months) or have recovered from the virus within the past six months and be able to prove it.

There are no obligations to quarantine or even to take a test for UK arrivals who have been vaccinated or recovered. More information is available here.

Norway is currently only allowing residents, citizens and the close family and partners of residents and citizens to enter from the UK.

All arrivals from the UK will be required to quarantine for at least seven days somewhere with a private bedroom and bathroom. If they return a negative PCR test after day seven, they will be released quarantine.

Travellers who have been fully vaccinated or have had Covid-19 in Norway and are able to prove so via Norway’s Covid certificate will be able to skip quarantine. Those with only one dose will have to quarantine for three days before testing out of quarantine.

Residents returning to Norway from the UK will need to provide some form of proof that they lived in Norway before their departure, such as a rental contract.

Travellers returning to Norway, including those from the UK, will have to present a negative test taken within 24 hours of their departure flight. This can be either a PCR test or a rapid antigen test. Travellers also need to fill out a registration form before their departure and take a test at the airport when they arrive in Norway.

Partners of Norwegian residents and citizens wishing to travel to Norway will need to complete a free application with the Norwegian Directorate of Immigration prior to travelling.

Fully vaccinated travellers with a Norwegian Covid certificate won’t be required to register, or take the Covid-19 tests.

Italy reinstated a mandatory quarantine and testing for UK arrivals from June 21st amid concern about the spread of the Delta variant.

READ ALSO: How should travellers from the UK quarantine in Italy?

Travel into Italy from the UK is still allowed for any reason. However, anyone who has been on British territory in the 14 days before arrival in Italy must quarantine for five days on arrival, regardless of nationality, and take a second coronavirus test at the end of the isolation period.

Anyone found not to be following these rules could face hefty fines, including up to €1000 for breaking quarantine.

The tests had initially been decreed until January 31.

Since the start of this year, travellers aged over 11 and coming from China to France have had to present a negative test taken 48 hours before the flight to board the plane.

Random testing will be carried out and anyone testing positive will have to self-isolate, the French authorities said, adding that everyone above six years old would have to wear face masks on the plane.

China has said that the number of daily Covid-19 deaths has fallen by nearly 80 percent since the start of the month.

A wave of virus cases has washed over the world’s most populous nation since Beijing abruptly ended its zero-Covid policy last month.

Beijing’s figures are believed to only represent a fraction of the true toll, given China’s narrow definition of a Covid death and official estimates that swathes of the population have been infected.