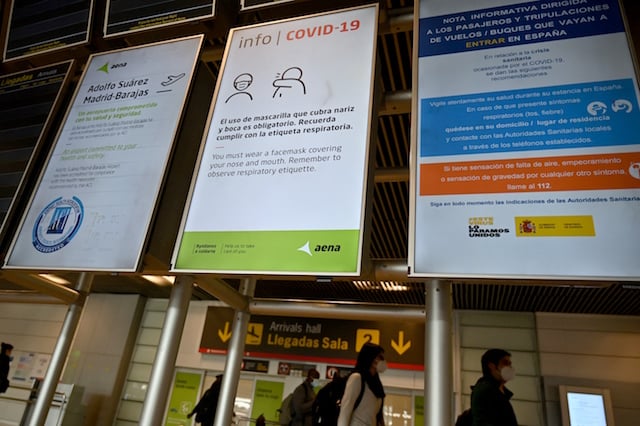 Antonio Zapatero, Deputy Minister of Public Health and head of the COVID-19 Plan for the Madrid region, has said Spain’s central government is “aware” that travellers with positive PCR tests are arriving at Barajas Airport, accusing La Moncloa of “not doing their jobs properly” with regards to border control, according to a report in online daily 20 Minutos.

“From January until now (late May 2021) tests have only been carried out on 7.4 percent of travellers coming into Barajas. It is a ridiculous figure that showcases the lack of real control,” Zapatero said during a press conference.

Zapatero explained that during the weekend of May 14th to 16th, there were 21 cases of Covid-19 at Barajas Airport. He explained that those cases hailed from countries such as Colombia, the Dominican Republic, France, Turkey, and Morocco, and were later admitted to the Zendal Hospital in the capital. According to Zapatero, at least three of these people had positive PCR tests.

Spain’s Ministry of Health has indicated that these cases were detected when carrying out random documentation checks.

“I do not understand how it is possible to let people board with positive PCR tests,” said Madrid’s Deputy Minister of Public Health.

When asked if national health authorities had communicated any information regarding these cases of positive PCR tests to them, Zapatero replied that “they have not given us any explanation”.

According to the report by 20Minutos, the Madrid government has detected a total of 800 imported coronavirus cases in health centres and hospitals that have entered through Barajas Airport.

Zapatero has also indicated that two of these imported cases were of the Indian variant. One of these two cases is a Spanish citizen residing in India who was transferred to Spain on a special medical plane and the other is a foreign tourist.

“The Indian variant is more worrying, because of what we’re seeing in the United Kingdom currently,” continued Zapatero.

“This mutation may complicate the definitive control of the pandemic. In the United Kingdom, there is an increase in cases and hospitalisations in young, unvaccinated people too,” he concluded.

Countries around Europe are tightening travel restrictions with the UK because of the spread of the so-called Indian variant of Covid-19.

Spain on the other hand has removed all restrictions for British tourists. From May 24th, UK holidaymakers can visit Spain without the need to quarantine or present a negative PCR test result. They will however need to fill in a health control form.

Spain will also allow all vaccinated travellers – regardless of their country of origin – to visit the country from June 7th.