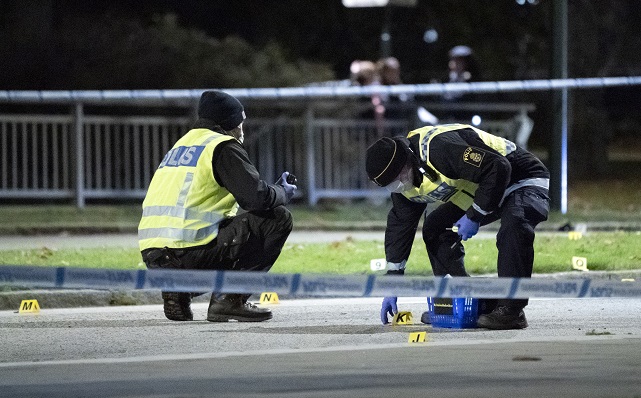 Police technicians at the scene of a shooting in Malmö. The southern city has seen a recent decline in gun violence, but across Sweden there has been a clear upward trend since 2000. Photo: Johan Nilsson/TT

In Sweden, deadly shootings have risen since the year 2000, although other fatal violence has reduced in the same period, meaning that deadly violence as a whole has remained relatively steady. Brå noted that the decline in other forms of deadly violence has served to “hide” the rise in fatal shootings.

Brå’s most recent figures showed that 48 people died of gun violence in 2020 (4.6 per 1 million inhabitants), a rise of three from the year before.

Europe as a whole has seen a reduction in both deadly violence and deadly shootings over the same time period. The average rate of deadly shootings in the European countries studied has more than halved since 2000.

No other country included in the study has seen a similar rise in fatal shootings; while not all have seen a steady year-by-year decline (and England and Wales for example saw a rise in fatal knife violence), Sweden’s increase is the most stark, and has been steady since 2005. Brå’s most recent statistics suggest that deadly gun violence increased last year too.

The report compared Sweden with 22 countries in Europe using data on cause of death from Eurostat and Nordic authorities, and the data was compiled at the request of the Swedish government.

“Sweden has moved from close to the bottom of the European rankings [in terms of deadly violence per capita] to very high up. It is only Croatia which in the past four years [of available data across countries studied, 2014-2017] has a higher level of deadly shootings,” said Brå researcher Klara Hradilova Selin. Between 2000 and 2003, Sweden was 18th out of the 22 countries for deadly shootings per capita.

In 2018, the most recent year for which data was available (although it was not available for all countries), Sweden had the highest level of deadly shootings of the countries included.

The report confirms what has been clear to people working in the police and other roles that come into contact with crime perpetrators or victims.

“The increased gun violence in Sweden is unique in comparison with most other countries in Europe, and there are no clear explanations for that,” Håkan Jarborg, a police chief in southern Sweden, told the TT newswire.

Most of the fatal shootings in Sweden (around 80 percent) had a link to organised crime, according to the study, a proportion which had risen from 30 to 50 percent in the early 2000s and less than 20 percent in the 1990s. Brå also compared the proportion to other countries: around 60 percent of fatal shootings were linked to organised crime in the Netherlands, while in Finland such events were extremely rare.

While Brå did not find a clear explanation for the rise, the study highlighted three possible developments: illegal drugs trade, conflicts within organised crime networks, and low levels of trust in the police, although the agency noted that these factors are present in other countries that have not seen a parallel rise.

“We don’t know why, it’s a kind of social contagion,” said Klara Hradilova Selin, adding: “If one shooting happens, very often another takes place close by in time and location.”

The report did find that the level of deadly knife violence was not significantly different in Sweden compared to the other countries studied, and there was neither a clear upward nor downward trend over the time period studied. Looking at other fatal violence, Sweden had slightly lower levels than the European average, and a decline over the period studied.

“We got a message that everyone had to evacuate immediately, so everyone started to run, including me,” a witness told SVT.

Filip Annas, a spokesperson for the Malmö police, said that the operation had been launched after a member of the public reported seeing a person with a “weapon-like object” at the entrance of the mall.

“We have found a person who matches the description but have not found a weapon,” he said. “We are continuing to search thoughout Emporia and will hopefully complete the operation shortly.”

By 3pm, police stated that they had searched the entire shopping mall, had not found anything suspicious and no longer deemed there to be a threat.

On August 20th a 31-year-old man was shot dead in broad daylight in the shopping centre, while a woman who happened to be standing near to him suffered a bullet wound.