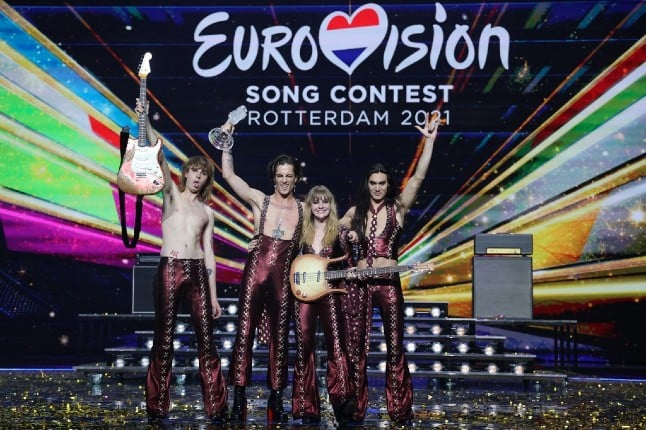 The Italian band Måneskin after their victory on Saturday. Photo: Kenzo Tribouillard / AFP

Clad in leather lederhosen and eyeliner, the Italians and their song “Zitti e Buoni” beat off stiff competition from France and Switzerland to win the
65th Eurovision.

Interviewed as soon as their win became clear, lead singer Damiano David exclaimed, “We just want to say to the whole Europe, the whole world – rock and roll never dies!”

But there was heartbreak for French singer Barbara Pravi, who came agonisingly close to ending her country’s 44 years of hurt since its last
Eurovision win with her moody number “Voila”.

The nailbiting finish capped a night of glitz and glamour in the Dutch port city, despite tough pandemic restrictions that limited the live audience at the Ahoy Arena to just 3,500 people.

Switzerland looked poised to win after the national juries had voted, with a narrow lead on France, but Måneskin won a massive number of telephone votes from the public, catapulting it into the lead with 524 points, to France’s 499 and Switzerland’s 432.

The victory marks the first time Italy has won the competition since 1990 in Croatia, when Toto Cutugno won with the song “Insieme:1992”.

The Roman rock band was given its name, which means ‘moonshine’ in Danish. Bassist Victoria De Angelis has a Danish mother and speaks the language fluently.

The band came second in the eleventh season of the Italian talent show X Factor in 2017, and won the Sanremo Music Festival in 2021.

The competition in Rotterdam was cancelled last year for the first time in the history of the 65-year tournament, one of the world’s most watched
television events with around 200 million viewers.

But the theme of this year’s Eurovision was “Open Up”, and the Dutch government-backed coronavirus restrictions could be a model for events such as Euro 2020 and the Tokyo Olympics as the world slowly emerges from lockdown.

Dutch 2019 winner Duncan Laurence meanwhile was also unable to take to the stage after coming down with symptoms of the disease during rehearsals this week.

the mood of the love-it or hate-it extravaganza was relentlessly upbeat, with the focus back on where it should be — the weird and wonderful songs, cheesy lyrics and flamboyant costumes.

Highlights included Norway’s contestant Tix, who took to the stage in huge white angel wings, and who takes his stage name from the tics that he suffers as a result of having Tourette’s Syndrome.

Other highlights included Cyprus’ entry “El Diablo” (Spanish for “The Devil”) which has been accused of blasphemy and satanism by the Cyprus
Orthodox Church and religious groups.

Russia’s contestant Manizha has angered conservatives with her song “Russian Woman” — even as she wowed audiences during the semi-finals with a huge Russian doll-style dress that burst open to reveal the singer in a red boiler suit.

A year ago, the Rotterdam Ahoy venue was being used as a makeshift hospital for coronavirus victims, and the shadow of the disease still hung over this year’s contest.

Contestants were in a “bubble” during the competition and every one of the thousands of people entering the Eurovision site had to be tested for
coronavirus. But that failed to dissuade fans from turning up to celebrate.

“I think it’s the beginning of a new start,” Saskia Scharree, 51, wearing a white and orange blazer decorated with traditional blue Dutch pottery designs, told AFP outside the arena.

“When something as big as this happens in Holland, you’re going to join in,” said Scharree, who said she had herself recovered from being “very ill”
with coronavirus last year.

Flag-waving Finnish fan Oona Sainio, 27, said she and her family had come to soak up the atmosphere despite not having tickets.

“We’re big Eurovision fans and we wanted to be close to where it’s all happening,” said Sainio, 27, who lives in the Netherlands.

Jakobs was emotional at the press conference after her victory, telling the story of her progress from an “largely unknown” indie artist to the Eurovision stage.

“There are a lot of feelings right now in this little body, an extremely large amount of feelings that can’t really fit in, so they’re exploding,” she said, before beginning to cry. “But I’m so happy and overwhelmed by all the support I’ve got from all these fantastic countries.”

When the time came to pick lots for which half of the final she would appear in, she leapt onto Mario Acampas, the presenter asking questions at the press conference, wrapping her legs around his waist and clasping herself tightly to his torso.

He then walked her over to the bowl where the lots were lying.

“I want you to choose the second half,” she said to him. “Imagine that I have a pistol here and on the count of three I’m going to shoot you if you don’t choose.”

He refused to pick for her so she took one herself and got the second half.

Jakobs, with her song, “Hold me closer”, was the clear favourite to go into the final, and will go through alongside Finland’s The Rasmus, and his song Jezebel, Serbia’s Konstrakta with “In corpore sano”, as well as entries from Belgium, Czechia, Azerbaijan, Poland, Estonia, Australia, and Romania.

You can see her performance on Thursday in the video below.

In the final, she will meet the other favourites, which include Ukraine, Italy, and the United Kingdom.

The final will be shown on Sweden’s state broadcaster SVT at 9pm on Saturday.