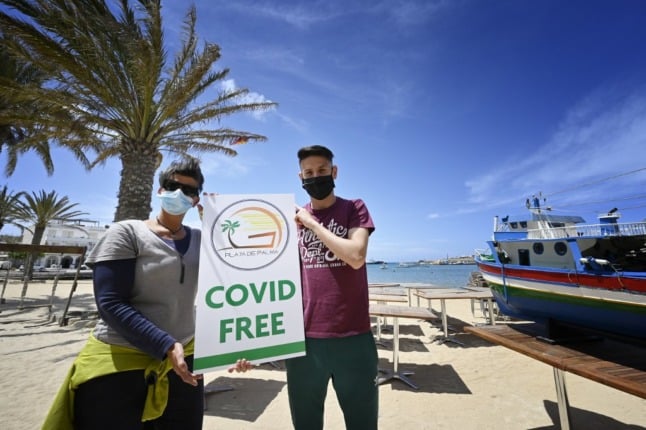 A beach bar on the Sicilian island of Lampedusa declares itself "Covid free". Photo: Alberto Pizzoli/AFP

Italy’s tier system that divides regions into risk zones has now been in place for six months, and until this week it depended on a complex assessment of more than 20 separate factors carried out every seven days.

Waiting for the national health institute’s analysis of the data every Friday has become a familiar routine for residents anxious to learn where they can travel, eat, shop and study for at least the next week.

While the idea was to get a comprehensive idea of the risk in each region by studying everything from how well contact tracing was working to how many hospital beds were occupied, regional authorities complained that the calculation was so complicated it made it difficult to foresee which zone their region might fall into, and therefore plan ahead – or contest the decision.

As infections surged again in the spring, the government introduced a red flag that would automatically send regions into lockdown: if new cases hit more than 250 per 100,000 inhabitants, regions would be declared high-risk “red zones” under maximum restrictions regardless of any other data.

The other key factor Italy based its calculations on was the Rt number, which indicates how many people each patient will transmit the coronavirus to on average, and therefore gives a sense how quickly infection is spreading. An Rt over 1 made it likely a region would become a moderate-risk orange zone, while over 1.25 indicated it would go red.

Below 1, meanwhile, increased a region’s chances of being classified a lower-risk yellow zone or even the lowest risk zone of all, white.

MAP: Which zone is your region in under Italy’s coronavirus rules?

With health data improving in recent weeks and Italy preparing to reopen the country by summer, regional authorities were once again pushing the Health Ministry to change the way it decided the risk zones.

In particular, they wanted to give less weight to the Rt number – which reflects infections of any severity, including ones without symptoms – and focus instead on how many serious cases were recorded.

The government agreed, and in its latest emergency decree of May 18th it simplified the way regional risk zones are classified to place more emphasis on the number of Covid-19 patients in hospital and intensive care.

Now the classification is based on just two main factors: incidence rate (the number of new cases per 100,000 inhabitants over the past week) and occupancy of hospital beds.

In detail, the criteria are as follows:

The new system makes it easier for regions to meet the “yellow” criteria, by offsetting a higher number of cases against the strain on hospitals.

The health institute will nonetheless continue to monitor all of the risk factors it previously considered until at least June 16th, the new decree states. When the two assessments produce different results for the same region, the government will go with whichever is lowest – even if it means choosing the old, complex assessment over the new one.

In other words, if a region is orange by the new system and yellow by the old (or vice versa), it will be declared yellow.

But the Health Ministry says it will operate an early-warning system based on data that might suggest a region is about to see a rapid spike – including the Rt number and forecasts of hospital occupancy rates. The new decree allows for yellow zones that show enough of these worrying signs to be declared orange regardless of the usual criteria.

That’s an outcome all regions will be dreading as Italy releases the brakes on travel and invites tourism, both domestic and international, to resume. With most of the country now under the lightest restrictions in months, an abrupt return to lockdown would be disastrous for newly reopened businesses.

MAP: Which parts of Italy will be Covid-19 ‘white zones’ in June?

The government has already announced that six regions will have almost all their restrictions lifted next month: Friuli-Venezia Giulia, Molise and Sardinia, which become white zones on June 1st, and Abruzzo, Liguria and Veneto which follow a week later.

The first three already have a weekly incidence rate of new cases per 100,000 inhabitants in the low 40s, while the others have rates in the 60s, per the health institute’s latest report for the week to May 13th.