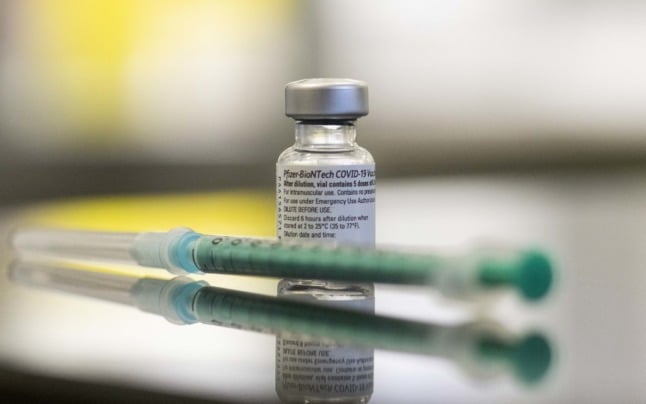 A phial of the Pfizer vaccine, the most commonly used vaccine in Norway. (Photo by THOMAS KIENZLE / AFP)

“From next week, we will have almost finished vaccinating people with underlying conditions, and we will extend the interval between vaccines from six to twelve weeks. This is in line with the Norwegian Institute of Public Health’s (NIPH) guidelines,” health councillor for Oslo, Robert Steen, told newspaper Dagbladet.

The new rule will not have a retroactive effect. This means that those who have already have their first dose will receive the second jab roughly six weeks after the first.

“Moving the appointment of the second dose, after the first has already been administered, would require manual rebooking. This would be very resource-intensive. This could lead to a lot of delays for people still waiting for their first dose,” Steen said.

The city council is hoping the increase in the interval between jabs will allow them to vaccinate the city’s population much faster.

“I am glad that the NIPH changed the guidelines, and that we can give the first shot to many more people now in the coming weeks. It is no secret that I wish the new guidelines had come earlier. We would probably have been able to have administered more doses by now,” the health councillor said.

Oslo city council has also said that it wouldn’t enter the next phase of step two of its five-step plan for reopening and lifting coronavirus measures until at least the 27th of May.

The next part of its phased approach to the second step of its reopening plan would see bar’s and restaurants reopen, with alcohol allowed to be served with food, as well as gyms and museums.

“I understand that the hospitality industry and owners and users of gyms are getting impatient. The first part of step two of the reopening plan seems to have gone well, but we must still be careful. If infections stay low, then it should be possible to open restaurants, gyms, museums and more before may is over,” the city’s mayor, Raymond Johansen, said.