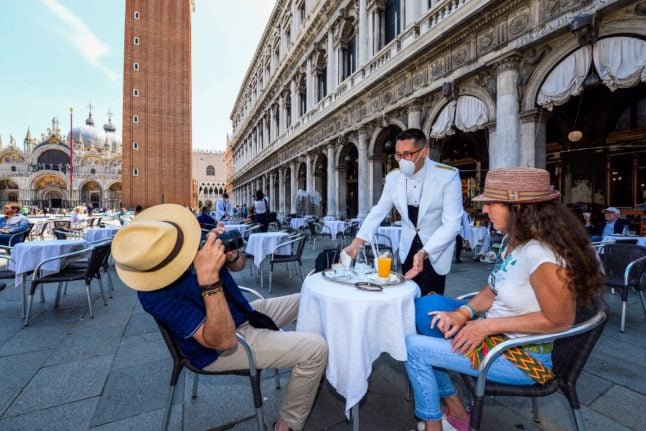 As Italy announced this week that it would allow travel to resume from mid-May onwards, the tourism minister said the country would open to “everyone”, but “above all” to those from outside the EU – adding that US tourists are some of the highest-spending visitors to Italy.

He did not give further details, or a firm date for travel to restart from the US.

The government did confirm that the long-awaited resumption of tourism into Italy from the USA will come with the requirement for a ‘health pass”, showing that the traveler is fully vaccinated, has recovered from Covid, or has recently tested negative. Further details of the scheme are yet to be announced.

Meanwhile Italy is still under a US State Department ‘Level 4’ travel warning due to the health situation.

And it’s not yet known which coronavirus rules Italy will keep over summer, with restrictions including mandatory mask-wearing in public and a 10pm curfew still in place nationwide.

So have these rules and uncertainties put American travelers off visiting?

Well, they certainly haven’t deterred readers of The Local who responded to our survey. Your answers to the question ‘will you travel to Italy when it’s possible?’ mostly ranged from ‘yes’ to ‘absolutely yes!”

Of around 150 people who answered our questionnaire within 24 hours, over 90 percent said that they intend to travel to Italy again as soon as possible, even though some have concerns.

Many told us they already had their flight and hotel reservations ready.

“100% ready. We are fully vaccinated and have booked a trip for July to Sicily. We are ready to provide any data needed, including getting a test if needed,” said Mark Herbert in Colorado.

“Although we can travel to Costa Rica or Hawaii, we miss Italy, the people and of course the cuisine. We have been worried that another summer shutdown could be hard for the restaurants to recover from. We would rather take our holiday funds to Italy.”

“Undoubtedly. We cannot wait,” said Philip R. Piccigallo and Rose Giambrone-Piccigallo, who are also fully vaccinated. “We are Italian Americans, second generation, whose grandparents were born in Italy. We have visited more than 40 times.”

A large number of people said their long-planned trips had been rescheduled due to the pandemic.

“I’ve been wanting to take my parents on a trip, show them what it is I love so much about Europe. It’ll be their first time in Europe and my second trip to Rome. We had it all planned out last year for early summer, but then the pandemic happened and it was all canceled,” said Judith Negron in Middletown, Connecticut.

“We’ve planned the trip again for this year and are hoping to have a go at it when the borders open.”

Of those who do not plan to travel, the most common reason given was that people did not want to be vaccinated.

Nine percent of those who responded were against getting vaccinated, and another seven percent said they believe the concept of vaccine passports is unfair, though some said they would travel if only a negative test result is required as expected.

A smaller number said they were concerned about the health situation in Italy.

The country is emerging from its third wave of infections, but still has a high number of new cases and deaths, and a relatively slow vaccine roll-out, with just over ten percent of the population fully vaccinated.

“My concern would be around how many people plan on travelling; realistically it will be busy given the state of everyone’s pandemic fatigue. I also am concerned about the focus on getting US tourists in for economic reasons, when Italy still needs to vaccinate the majority of their population,” said Carrie Borowy in Vermont, who plans to visit her partner in Italy.

Others were put off by the Italian health rules, currently including a 10pm curfew and compulsory mask-wearing in public, both indoors and outdoors, while some said they were concerned about how welcome tourists will be in the country.

“My family has done the right things during the pandemic and feel that since we have taken the correct precautions and gotten the vaccine, we are ready to see the world again,” said Heath Paukette in Allendale, Michigan, who is planning a family vacation. “My only concern is how Americans will be received in Italy.”

While more than half of those who answered were planning a vacation, people gave a wide range of reasons for their planned trips.

There was a significant number of second-home owners and people who had family in Italy who they have not been able to see in more than a year, since travel from outside the EU was suspended in March 2020.

“We’ve been carefully watching the news via outlets like The Local and took an “educated gamble” one month ago, booking flights from Denver to Turin via Frankfurt on Lufthansa,” said Tom Winter in Boulder, Colorado.

“This will be our first trip back to our property in the Val di Susa for over a year. We weren’t worried about the home, the structure is 400-years old and survived Napoleon. But it’s been tough not to be able to visit. We love the village and the people in it.”

Others said they plan to travel for work, to study Italian, to retire, to get married, or to buy property.

“My wife and I have been waiting to move to Italy,” said Michael Parr in Sacramento, California, who plans to “retire in Italy, get my dual citizenship, and buy a house.”

Several readers said they were planning their postponed weddings in Italy, or helping family members plan theirs.

Natalie dePasquale, from Miami, is particularly determined to travel as she is planning to get married in Tuscany this September.

“Nothing will stop me,” she said.

A big grazie to everyone who took the time to answer our questionnaire – it was great to hear from so many people who love Italy and can’t wait to return. You can keep up with the latest news updates in our Italian travel section.

Jordi Faulí is the seventh architect director of the Sagrada Familia following Antoni Gaudi and, for many, the one destined to finish it. Photo: Lluis Gene/AFP

But the pandemic has delayed efforts to finish this towering architectural masterpiece, which has been under construction for nearly 140 years, and it is no longer clear whether Faulí will still be in charge when it is finally done.

“I would like to be here for many more years, of course, but that’s in God’s hands,” says Faulí, 62, a wry smile on his lips.

He was just 31 when he joined the architectural team as a local in 1990 — the same age as Gaudi when the innovative Catalan architect began building his greatest work in the late 19th century, a project that would take up four decades of his life.

“When I arrived, only three of these columns were built and they were only 10 metres (33 feet) high,” he explains from a mezzanine in the main nave.

“I was lucky enough to design and see the construction of the entire interior, then the sacristy and now the main towers.”

When finished, the ornate cathedral which was designed by Gaudi will have 18 towers, the tallest of which will reach 172 metres into the air.

The second-highest tower, which is 138 metres tall and dedicated to the Virgin Mary, will be officially inaugurated on Wednesday with the illumination of the gigantic 5.5-tonne star crowning its highest point.

It is the tallest of the nine completed towers and the first to be inaugurated since 1976.

In 2019, the Sagrada Familia welcomed 4.7 million visitors, making it Barcelona’s most visited monument.

But it was forced to close in March 2020 as the Covid-19 pandemic took hold, with its doors staying shut for almost a year.

This year, there have been barely 764,000 visitors, municipal figures show.

And as entry tickets are the main source of funding for the ongoing building works, the goal of finishing the basilica by 2026 to mark the 100th anniversary of Gaudi’s death — he was run over by a tram — has been abandoned.

“We can’t give any estimate as to when it will be finished because we don’t know how visitor numbers will recover in the coming years,” Faulí says.

It is far from the first time Gaudi’s masterpiece has faced such challenges.

During the Spanish Civil War in the late 1930s, construction work stopped and many of Gaudi’s design plans and models were destroyed.

For critics, this major loss means they do not view what was built later as Gaudi’s work, despite the research carried out by his successors.

UNESCO, the United Nations’ cultural agency, has only granted World Heritage status to the Sagrada Familia’s crypt and one of its facades, both of which were built during Gaudi’s lifetime.

But Faulí insists the project remains faithful to what Gaudi had planned as it is based on the meticulous study of photographs, drawings and testimony from the late Modernist architect.

Nominated chief architect of the project in 2012, Faulí took over at the head of a team of 27 architects and more than 100 builders.

Today, there are five architects and some 16 builders working to finish the Sagrada Familia.

“It is a lot of responsibility because it’s an iconic project, which many people have an opinion about,” says Faulí.

Building such a vast monument which draws huge numbers of visitors is not welcomed by everyone, with some arguing that the hoards of visiting tourists are destroying the area.

Many also oppose plans to build an enormous staircase leading up to the main entrance, the construction of which will involve the demolition of several buildings, forcing hundreds to relocate.

“My life is here and they want to throw me out,” says one sign on a balcony near the Sagrada Familia.

Faulí said he understands their concerns and wants to find “fair solutions” through dialogue.

And if he could ask Gaudi one question? Faulí pauses to reflect for a few moments.

“I would ask him about his underlying intentions and what feelings he wanted to communicate through his architecture,” he says.