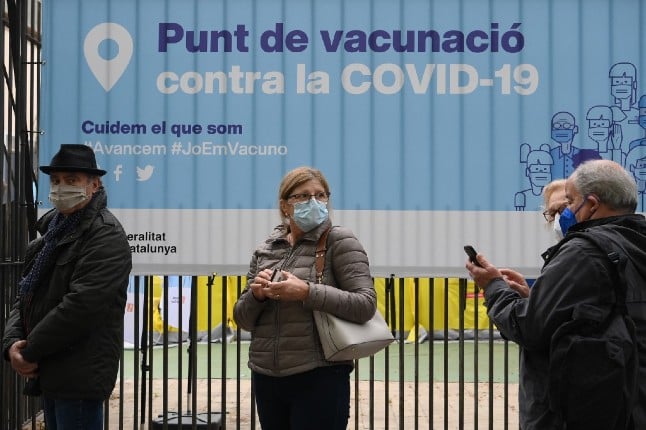 After a sluggish start, the pace of vaccination in the European countries covered by The Local’s network has picked up significantly this month, with Germany hitting a daily record 1.1m doses on Wednesday, France a daily record of 566,000 doses on Friday, and Spain now averaging over 300,000 doses a day,

If you drag the date button at the bottom of the chart below back to the start of vaccinations on December 27th and then move it slowly forward to the current day, you can see clearly how Spain, Germany, and Austria have pushed ahead.

You can also see how Denmark, the quickest European Union country off the mark in January and February, has lost its lead due to its decision to suspend the AstraZeneca jab on March 11th, and then on April 14th to discontinue its use completely.

Denmark had also banked heavily on the Johnson&Johnson vaccine, committing to taking 8.2 million doses, making it particularly hard hit by the delay in deliveries of the vaccine.

If you look at the chart below showing total vaccine doses delivered, you can see clearly how the pace has been accelerating, with Germany, France, Italy and Spain each administering about twice as many doses in April as they did in March.

France, the worst performer among the country’s covered by The Local in January and February, started improving in March, first overtaking Sweden, Belgium, and The Netherlands in terms of per capita doses administered, and then briefly overtaking Germany in early April.

Until the spurt in vaccinations over the last few weeks, Germany has been steady but unspectacular, ranking in the middle of the countries covered by The Local in terms of the number of doses delivered.

Denmark still leads in the share of its population that is fully vaccinated, thanks to its decision to keep a relatively short three-week gap between the first and second doses of the Pfizer and Moderna vaccines until April 16th, when the gap was extended to six weeks.

Switzerland has also had a relatively short one-month gap between doses, with the country’s Covid-19 Task Force only recommending on April 21st that the gap be extended to six weeks.

As a result, more than 11 percent of Denmark’s population is now vaccinated, with Switzerland not far behind. That’s nearly double the share achieved by Denmark’s neighbour, Norway.

When it comes to the share of the population who have had at least one dose, however, the picture is almost reversed, underlining the impact of national priorities and vaccination strategies.

The decision of Germany’s Permanent Vaccination Commission on March 4th to recommend extending the gap between the first and second AstraZeneca dose to a maximum of 12 weeks has paid dividends here, with more than a quarter of people in the country having had at least one dose.

Norway and Sweden have had a six-week gap between doses for the Pfizer vaccine since March, with the Norwegian Institute of Public Health recommending this Friday that the gap be extended to 12 weeks for both the Pfizer and the Moderna vaccines.

The chart below makes it clear that while the EU took control of vaccine purchasing for most of its member states, countries have different strategies once they receive the deliveries.

While France, Germany, Denmark and Austria began giving the vaccine to all vulnerable groups by the end of February, and Norway in March, Sweden and Spain have kept a tight focus on the elderly who are seen as most at risk.

One of the factors that helped Denmark achieve its relatively rapid rollout at the start was the high trust in vaccines in the country, an advantage it shared with Norway, Germany and Sweden.

According to a YouGov study commissioned by Imperial College (which provides the data to the chart below), at the time vaccinations began at the end of December, 53 percent of Danes said they would take a vaccine if given to them that week,  compared to just 19.9 percent of respondents from France.

Vaccine scepticism among those not yet vaccinated has since then reduced in all 16 countries surveyed except for the United Kingdom (where the slight fall is probably due to a stable number of vaccine sceptics comprising a greater share of those yet to be inoculated).

When Denmark suspended and then discontinued the AstraZeneca vaccine in mid-March the share of unvaccinated survey respondents who would have a dose that week fell from 72 percent to 65 percent, with smaller falls also seen in Italy, Spain, Germany and Norway. But confidence in the vaccine has since bounced back to 67 percent.

Austria’s Federal Government has a ticking time bomb on its hands: an ordinance that suspended its vaccine mandate law is set to expire by the end of May, which means that the controversial mandatory vaccination would be again in place as early as June 1st.

In order to keep that from happening, Austria’s Health Ministry needs to extend the current regulation or create a new one.

If it doesn’t, the Covid-19 mandatory vaccination law would automatically be back in June.

Since, by June, the vaccine mandate stated that non-vaccinated would start getting fines, the resumption of the law would mean that, from next month, those who are not vaccinated could be fined in routine checks, such as traffic checks.

The ins and outs of the vaccine mandate

The law was first introduced in February, even though the technical requirements for it to be enacted were not in place. The first stage of it was purely “informational”, and Austrian residents received letters explaining about vaccines and about the regulation.

A second stage, when people could have been fined if they were not vaccinated, was set to start in mid-March. Before a single person was fined, though, Health Minister Johannes Rauch (Greens) suspended the law with an ordinance.

The law was suspended for a variety of reasons, primarily due to the relatively high vaccination coverage the country had already received, along with the lower virulence of the Omicron variant.

To create a new regulation or extend the existing one stopping people from being fined, Rauch must await the report of the vaccination commission, which should be ready in May, according to the Ministry.

The coronavirus commission will assess whether the Vaccination Act is suitable and useful from a medical and legal point of view. A previous report said there were arguments for and against mandatory vaccination for those who were completely unvaccinated.

Der Standard reports there is little political support for compulsory vaccination and says there are still technical problems regarding automated fines. However, according to the Ministry of Health, the infrastructure should be completed in June.