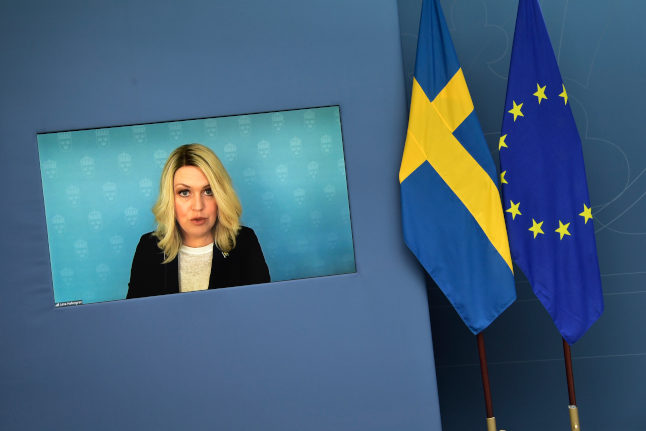 Sweden initially said it aimed to offer vaccinations to all adults in the first six months of 2021. But a month ago it postponed the deadline due to an EU-wide vaccine supply shortage, saying instead that adults would be offered at least one dose by August 15th.

The Public Health Agency has now delayed the target by another three weeks, estimating that adults will have been offered a dose by September 5th, although its director-general Johan Carlson estimated 90-95 percent will have received the offer by the end of August.

“Vaccinations are in full swing out in the regions, but due to the fact that the use of the Janssen vaccine has been suspended, the vaccine forecast needs to be adjusted,” said Swedish Health Minister Lena Hallengren in a press statement on Friday.

“At the same time, it is encouraging to see that more than 80 percent of everyone over the age of 65 has now received a first does of vaccine, three weeks ahead of schedule.”

Thirty percent of Sweden’s adult population has received at least one dose of a Covid-19 vaccine, and most of the country’s 21 regions have started Phase 3 of vaccinations – in other words everyone over the age of 60. The final phase, Phase 4 which extends vaccinations to the general public of under-60s, is under way in some regions.

How does it work if I get one dose (either first or second) in another country, will I still get a vaccine certificate and am I still considered vaccinated under Swedish rules? https://t.co/AbHxb1wt0c

Sweden paused the rollout of the Johnson & Johnson vaccine in April following reports of very rare side effects in the form of a combination of blood clots and low platelets.

The Moderna and Pfizer vaccines are also being used in Sweden, and the Astra Zeneca vaccine which has reported similar side effects is only being administered to over-65s. A sports hall in Stockholm’s Rinkeby suburb has been transformed into a vaccination hub. Photo: Fredrik Sandberg/TT

A new report published by the Public Health Agency yesterday showed that Sweden’s elderly foreign-born residents are much less likely than native Swedes to have been vaccinated.

“We don’t know exactly what’s behind this, but it’s important that the alarm is sounded,” state epidemiologist Anders Tegnell told the health authorities’ biweekly press conference on Thursday, calling on the country’s regional health agencies to look back over the first vaccination phases to find out what can be done to reach those who have been missed.

The vaccination gap is worrying as elderly people born in Africa and the Middle East are also overrepresented among those who end up being hospitalised with Covid-19.

Tegnell said that having “uneven vaccine cover” also risked leading to outbreaks in the future if the problem was not tackled rapidly.