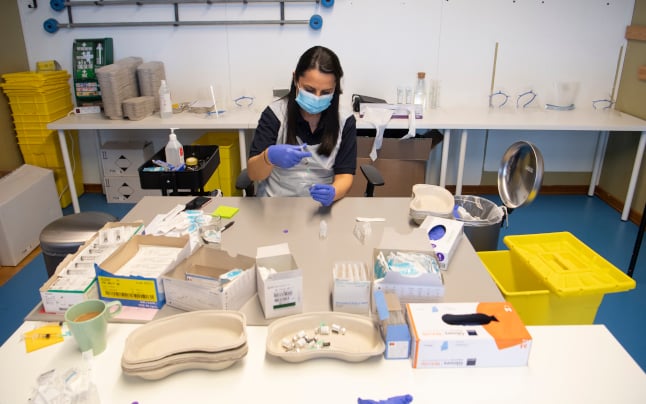 There are currently 1,603 patients being treated for Covid-19 in Sweden’s hospitals, of whom 384 are being treated in intensive care wards, down 120 and 23 respectively from a week ago.

“We are starting to see a slight impact on healthcare from the falling infection rate we’ve started to see about two weeks ago,” Thomas Lindén, from the National Board of Health and Welfare, told the health authorities’ biweekly press conference.

“The dramatic increase over the past few weeks in the number of Covid-19 patients in hospital outside of intensive care has now come to an end, and we can even see a fall.”

But he warned that the situation within Sweden’s hospitals remained “extremely serious”, with the number being treated still at the same level as the second wave peak, and some regions still seeing rising numbers of patients.

He said that the spare capacity in intensive care, at about 19 percent, was “a little too tight”, meaning patients needed to be transported frequently between regions.

At the press conference, Sweden’s state epidemiologist Anders Tegnell reported findings of an analysis that showed that foreign-born residents are much less likely to have been vaccinated.

“We don’t know exactly what’s behind this, but it’s important that the alarm is sounded,” he said, calling on the country’s regional health agencies to look back over the first vaccination phases to find out what can be done to reach those who have been missed.

The vaccination gap is worrying as elderly people born in Africa and the Middle East are also overrepresented among those who end up being hospitalised with Covid-19.

Tegnell said that having “uneven vaccine cover” also risked leading to outbreaks in the future if the problem was not tackled rapidly.

Fewer deaths thanks to vaccinations

While Tegnell warned that the infection rate remained at a worryingly high level, and called on people in Sweden to work even harder at reducing their contact with others, he said that the vaccination campaign had already dramatically reduced the number of deaths in the country, with around 100 deaths a week at present.

He noted that cases at elderly care homes had practically disappeared, and that vaccination was also having a significant effect on elderly and disabled people who get visits at home from care workers.

“We see a significant effect also among those who get home visits,” he said. “If we didn’t have the vaccine we would have had rapidly rising numbers of cases in this group once again.”

That’s a decrease from a very high level. In total, 14,002 people have died in Sweden to date after testing positive for coronavirus.