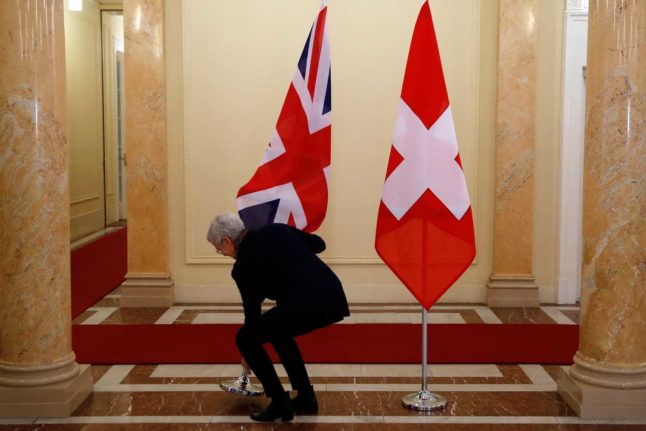 A Union Jack - the flag of the United Kingdom - next to a Swiss flag in Switzerland. Photo: STEFAN WERMUTH / AFP

As things stand now, while travel restrictions have been somewhat relaxed, tourist travel from the UK to Switzerland is still not allowed.

This does however not mean that all entry is banned.

Travellers from the UK are banned

Travellers from the UK have been banned from entering Switzerland since December 21st, due to the new virus strains originating in that country.

Since then, while arrivals from the UK have again been allowed to enter Switzerland in some circumstances (Swiss citizens, residents, etc), tourist travel has been restricted.

The website of the UK Embassy in Switzerland states that “due to COVID-19 restrictions, UK nationals and other non-Swiss / EU / EFTA citizens arriving from the UK or a ‘high risk country’ are not permitted entry to Switzerland”.

Although EU citizens are given certain rights to enter Switzerland, this has not been possible for UK citizens since Brexit was finalised.

How can people from the UK enter Switzerland?

Travellers from the United Kingdom are permitted to enter Switzerland in some circumstances.

They include people with Swiss citizenship, permanent residents or valid visa holders returning to Switzerland, as well as transit passengers who connect to other flights at one of Switzerland’s airports.

In this sense, ‘valid visa holders’ refers to people with entry rights connected to their work, for instance work permits or permissions to enter on a diplomatic basis.

Unfortunately for people wanting to holiday in Switzerland, this does not include tourists.

EXPLAINED: Can people from the United States and Great Britain come to Switzerland?

What about quarantine rules?

There was some excitement in March when Switzerland removed the United Kingdom and the United States from its mandatory quarantine list.

Some saw the news and felt that this meant they would again be allowed to enter Switzerland without restrictions – but unfortunately this is not the case.

In fact, what it actually meant was that people arriving from the UK – i.e. those in the above categories who had permission to enter – would not be required to quarantine for ten days on arrival.

Therefore, while this may have made things a little easier for Swiss citizens living in the UK or vice versa, it did not mean that tourists can again come from the UK to Switzerland.

When is this likely to change?

Unfortunately, at this stage we do not know when tourists from the UK will again be allowed to visit Switzerland.

Switzerland has not said anything definite about opening its borders for foreign travellers.

There has been no official announcement about allowing British tourists back anytime soon.

However, there is mounting pressure from the Swiss tourism and aviation industry to ease restrictions on tourist travel.

OK, so when will Brits realistically be allowed to enter Switzerland again?

Practically, it is more than likely that Switzerland will not lift any travel restrictions unilaterally; rather, it will act in accordance with EU guidelines as it has done since the start of the pandemic.

French president Emmanuel Macron said on a US news programme in April that France is planning to allow entry to vaccinated American tourists this summer.

In such a case, Switzerland, as France’s neighbour and part of the Schengen area, will probably open its borders to residents of non-EU countries, including the UK and the US, as well.

The development of the so-called ‘green pass’ – the immunity passport which will again allow people to travel – is likely to be a key indicator.

While this is happening at a ground level in Switzerland, it will be incorporated into a broader EU plan which will allow vaccinated people along with those who have tested negative and who have recently recovered from the virus to travel again.

UPDATED: Everything you need to know about the ‘green pass’, Switzerland’s coronavirus immunity card

But ultimately, the evolution of the Covid pandemic will determine whether travel between the US and Switzerland is a possibility this summer.