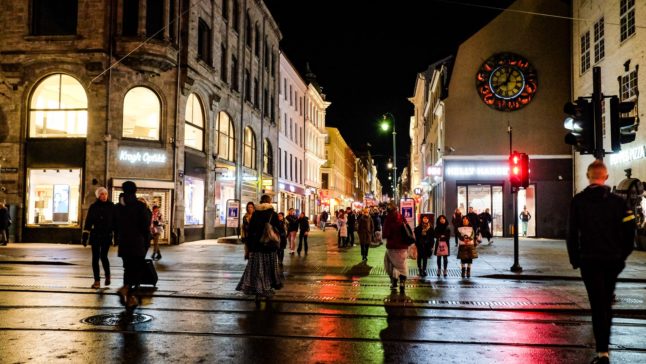 Karl Johans gate which leads straight from Oslo Central Station to the Palace, along one of Oslo's busiest shopping streets. Photo by Gunnar Ridderström on Unsplash

The five-step plan was presented by the city’s mayor, Raymond Johansen, at a press conference on Tuesday.

“When we closed the city on November 9th, no one thought that the restrictions would last for half a year,” Johansen said.

“If infections continue to go down and we all follow the rules, then we can look forward to a gradual transition to a city and life as we remember it,” the mayor said.

The news will come as welcome relief to the city’s residents given measures have been in place since November 9th, when an alcohol ban was introduced. In January, most shops and restaurants were also forced to close.

As of Tuesday, April 27th, the limit of a maximum of two visitors being allowed has been upped to ten. Outdoor events for up to ten people can go ahead. Up to 20 people under the age of 20 can partake in organised sports or leisure activities.

Despite allowing Oslo’s residents to entertain up to ten guests, the city’s mayor has urged people to stick to national advice, which recommends a maximum of five visitors.

“Even though we can all have more visitors, I ask everyone to remain restrained and careful. Nationally, the government has a recommendation for a maximum of five guests. Of course, this advice also applies to Oslo,” Johansen said.

Johansen also said that the city council would assess moving to step two next week. He stressed that while the council would look at the possibility, there wasn’t a guarantee the city would move onto the next phase.

“It is quite possible that next week we will say it will take some time before we can say exactly when step two can be implemented,” Oslo’s mayor said.

READ MORE: Are Norway’s Covid-19 numbers on track for reopening.

Like the government’s four-step plan for relaxing measures nationally, the city council didn’t offer any solid dates or guarantees of when each step would occur.

Step two would see much of Oslo reopen for business and the return of alcohol being served. It would also include:

Step three would see alcohol service return to usual and entertainment venues such as cinemas, theatres, and bowling alleys reopen. This is what’s planned for step three:

Step Four would further ease measures, and more people will return to the office. However, as the five-step plan is in its infancy, the city council could not give more solid details. This is what the city council expects to happen when it embarks on step four:

Step five would represent the full reopening of Oslo and would remove all local Covid rules and regulations. However, the council has yet to offer any solid dates on when this will be.