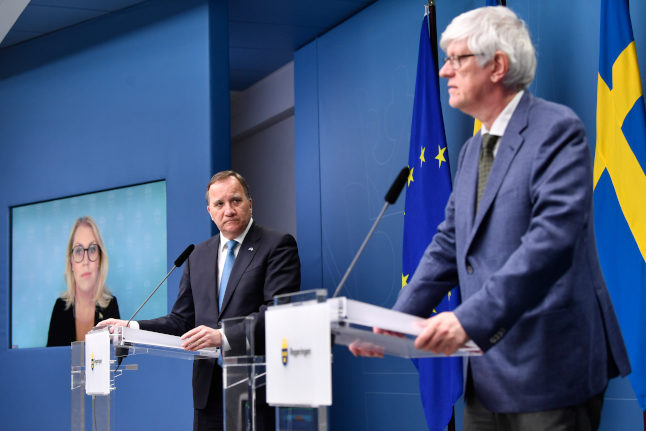 The Public Health Agency had originally hoped to lift restrictions on the number of people allowed at public events and gatherings by April 11th, but this was later postponed to May 3rd. But on Thursday the agency and government said the restrictions would be extended further.

The reason is the significant spread of infection, and the severe strain on intensive care units in many Swedish regions. Although fewer people are dying thanks to vaccinations, the high spread is leading to more people requiring hospital treatment for serious illness.

“When the pressure on healthcare decreases and the spread of infection goes down, only at that point will the government be prepared to take the first step to lift restrictions. But we aren’t there yet,” Löfven told a press conference, joined by Health Minister Lena Hallengren and Public Health Agency director-general Johan Carlson.

The announcement comes after the Public Health Agency advised the government to keep current restrictions in place, suggesting that they may instead be able to start lifting them in mid-May, if the number of new infections decreases as more and more people get vaccinated.

Other restrictions and recommendations, for example rules that make restaurants close by 8.30pm and regulate how many customers are allowed in shops at the same time (which had also been set to run out by May 3rd), will also be extended, Carlson told the press conference.

As The Local reported this week, several Swedish regions have reached their maximum capacity for intensive care and have been forced to ask other regions for help as the continued high spread is leading to more people – especially young people – requiring hospital treatment.

“Meanwhile,” said Hallengren, regional authorities “are reporting that compliance with the recommendations is decreasing every week. That is concerning. Pandemic fatigue is likely one of several reasons behind the continuously high spread of infection”.

Some municipalities in Sweden, such as university towns Lund and Uppsala, have banned people from certain parks on the upcoming Walpurgis Night on April 30th – an evening when people in Sweden usually gather to light bonfires and celebrate the arrival of spring – and Hallengren urged other local authorities to also look into whether or not it might be worth restricting access to certain public spaces.

Carlson stressed that not only public gatherings should be cancelled on Walpurgis Night.

“All forms of private celebrations where there may be crowding are also inadvisable,” he said.

More than 13,800 people have died in Sweden after testing positive for coronavirus. More than 932,000 cases have been confirmed so far, and more than 6,600 Covid-19 patients have received intensive care treatment since the start of the pandemic.

More than two million people have received at least one dose of a vaccine, almost 25 percent of Sweden’s adult population.

You can watch the press conference (in Swedish) below: