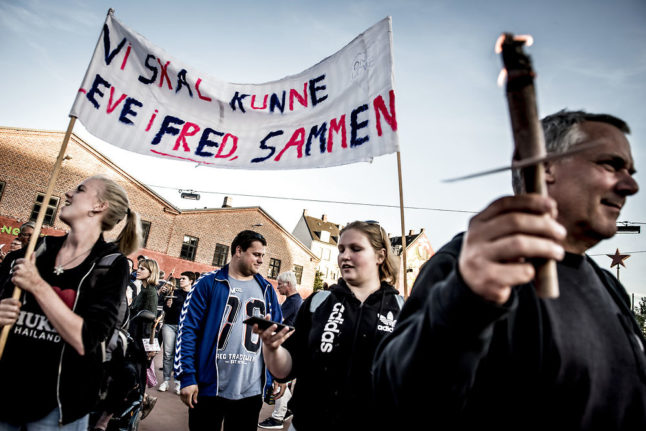 People protest against gangs in Copenhagen in 2017, a year that saw an extended period of violence between crime groups. Photo: Mads Claus Rasmussen/Ritzau Scanpix

Dual nationals who are convicted of serious crimes in connection with their association with a gang would lose their Danish passports if the proposal becomes law.

An agreement for changes to existing citizenship rules, announced earlier this week, required parliament to look into the possibility of revoking citizenship entirely from Danish nationals who have committed crimes.

Offences which would qualify an individual for retraction of their citizenship would be “serious gang crimes that are seriously damaging to the state’s vital interests,” the Ministry of Immigration and Integration said in a statement.

Current laws allow citizenship to be revoked, but for a smaller range of serious crimes against the state including terrorism or acting for a foreign militant group against Danish interests.

In the statement, released Wednesday evening, the government said it wanted a legal option to “withdraw citizenship from gang members who take part in gang conflicts to be used as widely as possible within the boundaries of Denmark’s international obligations”.

According to immigration minister Mattias Tesfaye, organised crime in Denmark is “very severe”.

Such crime “destroys local communities and creates feelings of insecurity for Mr and Mrs Denmark,” he added in the statement.

“Yesterday, we were the victims of a computer hack. We resumed operations in some stores overnight,” 7-Eleven said.

“We expect to open more during the day,” it added in its statement Tuesday.

The sudden outage occurred on Monday, a first for the US convenience store chain in Denmark, where it operates 175 stores.

It did not say who might have been behind the attack.

Five stores were so far open again, which were for now only receiving payments in cash or via a mobile phone application.

Based in Irving, Texas, 7-Eleven has than 77,000 stores worldwide which it operates either directly or under licence.