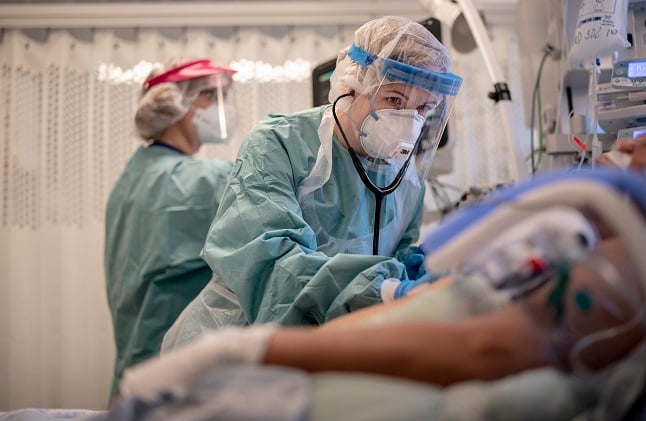 Health Minister Lena Hallengren called a briefing on Wednesday to underline the severity of the situation in the nation’s intensive care departments.

“In several places in the healthcare sector, more people are being cared for than at any time during the pandemic,” said Hallengren.

“Healthcare workers are also people, and no person can manage for an indefinite time. In the long-term, the healthcare sector cannot compensate for the fact that far too many are making far too little effort to follow the guidelines and recommendations.

“Let me stress one thing: there is no room to live as if the pandemic is already over. The infection rate won’t go down by itself. Think about the fact that Covid-19 can be so serious that not even intensive care helps, even for those who are completely healthy to start with. Now you, I, and all others need to renew our efforts to follow the restrictions.”

She said that although the healthcare sector had made major efforts to equip itself to cope with the pandemic, it was not possible to sustain these efforts at the same level now that Sweden is in its third wave of the virus.

How many people are in intensive care?

When the virus first hit Sweden last year, the nation which had one of Europe’s lowest numbers of intensive care beds per capita worked hard to double that number.

As of April 20th, Sweden had 767 available places in intensive care wards equipped with ventilators, according to the latest report from the National Board of Health and Welfare.

Of those, 649 (85 percent) were occupied, including 416 (54 percent of the total available places, 63 percent of occupied beds) Covid-19 patients. That’s a higher figure than at the peak of the second wave: 636 patients were being treated in ICUs on January 13th. The peak of the first wave, the highest number of intensive care patients reported in Sweden at any point during the pandemic, was 777 patients on April 29th, 2020 (including all patients in intensive care, not just Covid-19).

While 15 percent available capacity might sound like a stable situation, this is below the target of 20 percent, and Sweden has been below that target on most days in April.

The country does not aim for more spare capacity than this, because it says having more than 20 percent unused capacity can lead to inefficient use of stretched resources, but the National Board of Health and Welfare’s director Olivia Wigzell said the current situation meant the healthcare sector had “small margins” and that some regions had “reached their limit”.

She explained that extra beds were needed to be able to deal with emergencies, including non-Covid related incidents such as traffic accidents, and added that Sweden was co-operating with other Nordic countries – comparatively less hard hit by the pandemic – for example to get the necessary medical equipment.

“Every extra place in intensive care is not just a bed but also staff, skills, and effort. Staff have worked for a long time under great pressure with basically no breathing room between the second and third wave,” said Wigzell.

She added that on average, six out of every 100 people who test positive for Covid-19 will end up in hospital two weeks later, and said that based on the current high spread of infection, this means the numbers of intensive care admissions will also continue to increase.

Before the pandemic, Sweden had 526 available intensive care beds. Increasing capacity has put a significant burden on healthcare workers, requiring longer shifts, moving staff from other departments and regions, and cancelling non-urgent care in many parts of the country.

Another big difference is that the average age of people in intensive care wards with Covid-19 is now much lower than during previous waves. Fewer over-70s are currently receiving intensive care for the virus, but currently around a third of ICU patients are aged under 50.

This is partly because many of the elderly and most vulnerable to severe illness from the disease have now gained a level of protection through vaccination. But it also shows how the increased spread of the virus among all age groups means that more young and generally fit people are becoming seriously ill from catching Covid-19.

Which regions are hardest hit?

The burden is also unevenly distributed across Sweden, so that although nationwide there may be fewer patients in ICUs than last spring, in some regions hospitals have already reached maximum capacity and been forced to transfer patients elsewhere.

Five of Sweden’s 21 regions have less than ten percent spare ICU capacity, and a further eight between 10-20 percent. And all but one region told the agency they expected the situation to worsen in both the immediate term (the next 1-3 days) and long-term (the next 10-15 days).

Also speaking at the government’s briefing was an intensive care nurse from Uppsala, Sofia Lindström, who is also spokesperson for the region’s Association of Health Professionals.

“I have seen all the press conferences over the past year and I know that a lot of people have a hard time understanding what is being described,” she said. “When I was dropping off at the preschool a few weeks ago, the teacher asked me, ‘is it as bad as they are saying in the media, is it really that bad in the healthcare sector’? Yes, it is that bad.”

“We have paid with our health. We have worked overtime, an enormous number of hours – we have broken records in the number of overtime,” she said.

Uppsala is one of the regions, along with Dalarna, Gävleborg, Halland, Kalmar, and Västernorrland, that currently have more Covid-19 patients in intensive care than at any point previously during the pandemic.

Sörmland and Stockholm were two of the regions most severely hit by the first wave in spring 2020 and Covid-19 intensive care admissions are not back at those levels, but have still surpassed the peak of the second wave. The situation is similar in Norrbotten, Värmland, Västerbotten, Örebro, Östergötland, with Covid-19 intensive care numbers higher now than at the peak of the second wave but not yet at spring 2020 levels, though in these regions the current figures are not far off those from the first wave.