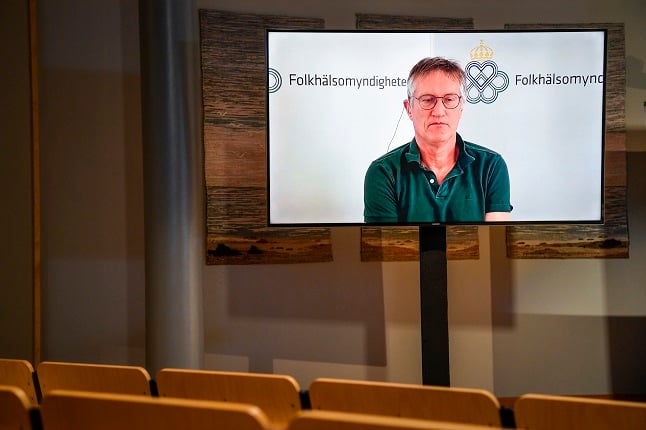 The three key messages he gave to the public were: only socialise within a small circle (defined as the people you live with or otherwise need to have close contact with regularly), work from home if you have the option to, and avoid social activities in your free time.

Although the EU/EEA in general is seeing a downward trend in cases, in Sweden the number of new cases is continuing to rise.

Over the last 14 days Sweden reported 789 new cases per 100,000 people, up from last week, while the number of Covid-19 patients in intensive care has now surpassed the level from the peak of the second wave, with 416 people being treated for the virus in the country’s ICUs, leaving just 16 percent available capacity nationwide. In total, 2,212 people are being treated in hospitals for Covid-19.

According to the National Board of Health and Welfare, two regions have reported a “critical effect” on intensive care as a result of the pandemic, and a further 10 reported a “serious effect”, with no expectation that the situation will improve over the next few weeks due to the continued high spread of infection.

There are no current plans to reopen the field hospitals that were set up around Sweden in spring 2020; the resource which is most severely limited is staff, rather than physical beds, according to the agency.

Asked by Göteborgs-Posten if Swedish authorities had an estimate of the role played by asymptomatic spread of Covid-19, Tegnell said: “It is very difficult, the basic problem is defining what is asymptomatic. We have done random tests of the population, there we have found people who didn’t report having symptoms. When we contacted them later they have had symptoms or developed symptoms shortly afterwards. It is not very common that people are going round carrying the virus without noticing. It is not a large group that has no symptoms at all.”

Tegnell was also asked if it was time to change the recommendations following reports of falling compliance. He responded: “That sounds like a dangerous route to take. Many people are following the restrictions, we can see for example that there has been no real spread of influenza this year, people are following them but of course it would be better if more people followed the recommendations.”

The number of weekly deaths from Covid-19 remains at a relatively stable level, with the increasing spread of infection leading more people to get sick, but the vaccination programme meaning a growing number of those most vulnerable to serious illness are protected.

Also on Tuesday, the Public Health Agency announced that its recommendation to use the Astra Zeneca vaccine only for people aged over 65 would remain in place. This is due to reports of a rare side effect of blood clots, which have affected a small number of people, mostly women aged under 60. Under-65s who have already had one dose of Astra Zeneca’s vaccine will be offered another vaccine for their second dose.