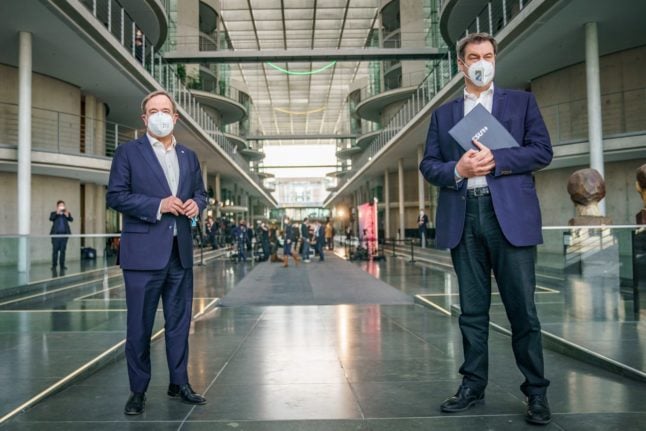 Armin Laschet, the chief of Merkel’s CDU party, and Markus Söder, the leader of Bavaria sister party CSU, have been in a scrum for a week over who will lead the conservatives into elections in September.

The rivals had earlier said an agreement would be found by the end of the week but party sources told AFP Sunday that a deal was still out of reach with closed-door negotiations between both men ongoing.

Söder and Laschet flew in on Sunday night to Berlin for talks, German media reported.

As head of the Christian Democratic Union, Merkel loyalist Laschet would normally be the obvious choice for the alliance’s chancellor candidate nomination.

But with support for the parties plumbing new lows amid anger over Germany’s pandemic management, the more popular Söder has put up a formidable challenge against Laschet.

Söder, who declared his bid for the job last Sunday, had then said he would step aside “without resentment” if larger party CDU was to decide for his rival Laschet.

But even after the CDU’s leadership came out a day later in support for Laschet, Soeder refused to back down. Instead, the 54-year-old cited popularity ratings as he dug in his heels.

A recent poll by public broadcaster ARD showed 44 percent of Germans in favour of Söder as most qualified as the CDU-CSU’s chancellor candidate. Laschet only had 15 percent of support.

The infighting has thrown the conservatives into disarray as Merkel is about to bow out after 16 years in power.

It has also sapped energy at a time when Germany is struggling to put down a raging third wave of the coronavirus pandemic that has already claimed almost 80,000 lives in Europe’s biggest economy.

With no agreement in sight, conservatives up and down the country were calling emergency meetings to thrash out who to support.

The alliance’s youth organisation Junge Union on Sunday voted to back Söder, with 14 out of 18 of its chapters in favour of the Bavarian.

“Both candidates have had enough time to come to a decision. That didn’t happen, so we see ourselves forced to position ourselves,” said Junge Union chief Tilman Kuban.

Meanwhile, some MPs supporting Söder had been collecting signatures to force a vote of the CDU-CSU parliamentary group when they meet on Tuesday.

Party heavyweight Wolfgang Schäuble has hit out against Soeder for undermining the CDU leadership’s endorsement of Laschet as “only a backroom deal”.

The conservative alliance would struggle in the elections without a strong CDU, warned the former finance minister who is also currently speaker of the house.

READ MORE: What you need to know about the two men vying to replace Merkel as Chancellor

Yet others were starting to shift in favour of Söder.

The state premiers of Saarland and Saxony-Anhalt have both indirectly said that Söder should not be written off.

“It is completely clear that the question of with whom one will have the better chance at the elections must play a central role,” said Saarland’s leader Tobias Hans.