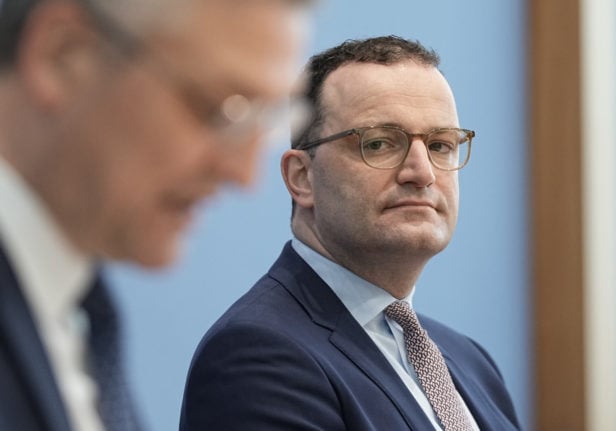 Wieler and Spahn speaking on Thursday in Berlin. Photo: DPA

It was “naive” to believe that the virus could be controlled through increased testing, as is now required in most places to enter non-essential shops, get a hair cut, or in some cities enter the workplace, the experts said.

“It won’t work,” RKI director Lothar Wieler said on Thursday. “We have to get the numbers down. That requires regulations, effective strategies and their immediate implementation.”

German Health Minister Jens Spahn (CDU) appealed to the states not to wait for the “federal emergency brake” – which provides unified restrictions across Germany for areas with high case counts – to be ready next week at the earliest.

“Every day counts,” he said.

The figures have been increasing daily, and Germany could see more new cases this week than anytime since the start of the pandemic.

According to the RKI, the number of new infections per 100,000 inhabitants within a week was 160.1 nationwide on Thursday morning, up from 90.4 four weeks ago. This graph shows the number of new Covid-19 infections since the start of the pandemic. Photo: DPA

Wieler made a call for action to relieve mounting pressure on hospitals.

“The situation in the hospitals is coming to a head dramatically in some cases and will also hit us even harder than in the second wave,” he said, advising all hospitals to limit regular operations.

There are already no more free beds in intensive care units in some cities and metropolitan areas, he said, and more young people are requiring intensive care. Sick people in stable health should be transferred to less affected regions in the near future.

For Spahn, the main goal remains to avoid overburdening the healthcare system. “What we may miss now will pay back in two or three weeks. Just like what wasn’t decided two, three weeks ago is avenging itself now.”

Spahn said that despite setbacks with vaccines from AstraZeneca and Johnson & Johnson, everyone willing to be vaccinated will still be able to get their jabs by the end of the summer.

While Johnson & Johnson has been approved in the EU, it’s faced delivery delays to Germany, and AstraZeneca has been met with repeated controversy over a possible link to rare cases of blood clots.

Wieler compared the current pandemic situation to dangerous driving: “Imagine you are driving along narrow roads in the Dolomites.

“It’s winding and there’s a steep slope on one side. Everyone knows I can only drive into this curve at 30. If I drive in here at a speed of 100, it’s life-threatening. And to be honest, (slamming on the brakes) won’t help.”