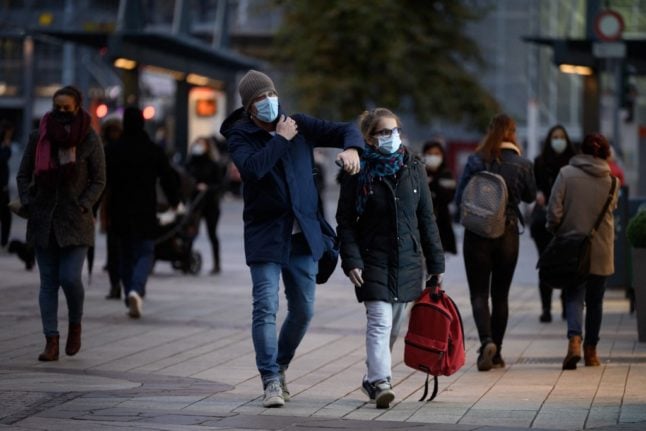 “Once high-risk patients have been vaccinated about three quarters of hospitalizations will be eliminated. That means we could then live with case numbers of 20,000 to 30,000 per day without the hospitals hitting their limits,” Valentin Vogt told broadcaster SRF.

On Friday some 2,500 new cases were reported nationwide, meaning Vogt’s proposal would represent tolerating a tenfold worsening of the epidemic.

Vogt called for the government to quickly lift the restrictions once the roughly 2.6 million Swiss residents who are considered to be risk patients have been vaccinated, something that is expected to happen by the middle of May.

He described such a strategy as entailing “a short phase, which is intense, and then normality will return there as well.”

Urs Karrer, a member of the Covid 19 task force and head of the Winterthur Cantonal Hospital, criticized the proposal, saying that around 50 percent of Covid-19 patients currently do not belong to any risk group.

He told SRF that hospitals would not be able to cope with 30,000 positive cases a day, even if all people classified as belonging to a risk group have been vaccinated.

“It would be absolutely unfair if now, after people have put so much effort over the past year into keeping this virus under control that you would now expose them to a quite dangerous infection without them having had the chance to get vaccinated,” Karrer said.

Epidemiologist Manuel Battegay described Vogt’s proposal as an “irresponsible, unethical, and un-objective idea of letting the virus sweep through the population.”

“Very many citizens of this country have done without so much for over a year and have showed solidarity. It is unethical to relax the restrictions now before so many people have had a chance to receive their vaccinations,” he said.

Several Western European nations have recently recorded their highest daily case numbers in months, due in part to Omicron sub-variants BA.4 and BA.5.

The increase in cases has spurred calls for increased vigilance across a continent that has relaxed most if not all coronavirus restrictions.

The first resurgence came in May in Portugal, where BA.5 propelled a wave that hit almost 30,000 cases a day at the beginning of June. That wave has since started to subside, however.

Italy recorded more than 62,700 cases on Tuesday, nearly doubling the number from the previous week, the health ministry said.

France recorded over 95,000 cases on Tuesday, its highest daily number since late April, representing a 45-percent increase in just a week.

Austria this Wednesday recorded more than 10,000 for the first time since April.

Cases have also surged in Britain, where there has been a seven-fold increase in Omicron reinfection, according to the Office for National Statistics (ONS).

The ONS blamed the rise on the BA.4 and BA.5 variants, but also said Covid fell to the sixth most common cause of death in May, accounting for 3.3 percent of all deaths in England and Wales.

Mircea Sofonea, an epidemiologist at the University of Montpellier, said Covid’s European summer wave could be explained by two factors.

One is declining immunity, because “the protection conferred by an infection or a vaccine dose decreases in time,” he told AFP.

The other came down to the new subvariants BA.4 and particularly BA.5, which are spreading more quickly because they appear to be both more contagious and better able to escape immunity.

Olivier Schwartz, head of the virus and immunity unit at the Pasteur Institute in Paris, said BA.5 was “taking over” because it is 10 percent more contagious than BA.2.

“We are faced with a continuous evolution of the virus, which encounters people who already have antibodies — because they have been previously infected or vaccinated — and then must find a selective advantage to be able to sneak in,” he said.

READ ALSO: Tourists: What to do if you test positive for Covid in France

But are the new subvariants more severe?

“Based on limited data, there is no evidence of BA.4 and BA.5 being associated with increased infection severity compared to the circulating variants BA.1 and BA.2,” the European Centre for Disease Prevention and Control (ECDC) said last week.

But rising cases can result in increasing hospitalisations and deaths, the ECDC warned.

Could masks be making a comeback over summer? (Photo by OSCAR DEL POZO / AFP)

Alain Fischer, who coordinates France’s pandemic vaccine strategy, warned that the country’s hospitalisations had begun to rise, which would likely lead to more intensive care admissions and eventually more deaths.

However, in Germany, virologist Klaus Stohr told the ZDF channel that “nothing dramatic will happen in the intensive care units in hospitals”.

Return of the mask?

The ECDC called on European countries to “remain vigilant” by maintaining testing and surveillance systems.

“It is expected that additional booster doses will be needed for those groups most at risk of severe disease, in anticipation of future waves,” it added.

“I want to continue to recommend protecting yourself by getting a second booster shot,” said Italy’s Health Minister Roberto Speranza, who recently tested positive for Covid.

Fischer said France had “clearly insufficient vaccination rates” and that a second booster shot was needed.

Germany’s government is waiting on expert advice on June 30 to decide whether to reimpose mandatory mask-wearing rules indoors.

The chairman of the World Medical Association, German doctor Frank Ulrich Montgomery, has recommended a “toolbox” against the Covid wave that includes mask-wearing, vaccination and limiting the number of contacts.