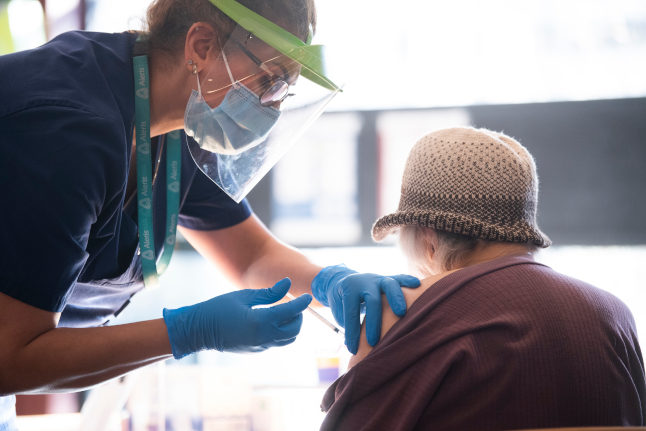 An elderly woman receiving her dose of the Covid-19 vaccine. Photo: Fredrik Sandberg/TT

The majority of Swedes will be happy to get vaccinated against Covid-19 when it is their turn, a new survey by the Public Health Agency suggests.

Around 3,000 people responded to the survey, which was carried out in mid-March – before Sweden’s decision to reopen vaccinations with the AstraZeneca jab to people aged above 65.

The proportion of people willing to get vaccinated was above 88 percent in all age groups, but older people were on the whole more likely to say yes to the jab than younger people.

Protecting others and their own health was the main reason people said they would get vaccinated.

Other reasons included a return to normal life, and to be able to meet and hug loved ones.

Respondents were most likely to receive information about the vaccine from the media (62 percent), the authorities (55 percent) or family and friends (42 percent).

Sweden last week formally abandoned its earlier plan to offer Covid-19 vaccinations to all adults in the first six months of 2021, setting a new target of August 15th and limiting that deadline to first doses only.