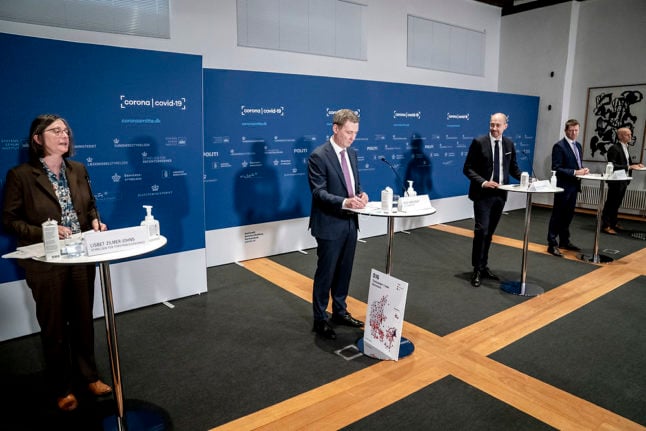 The current capacity to test 400,000 people with a combination of PCR tests and rapid tests every day will increase to 700,000 by mid-May, justice minister Nick Hækkerup said at a briefing on Wednesday afternoon.

Denmark this week announced a plan for the gradual lifting of coronavirus restrictions through to the end of May, even as many other countries in Europe are facing new waves of the virus and tightening restrictions.

The plan already includes the use of so-called ‘corona passports’, while the country’s already ample testing capacity is to be further expanded, the government said in the briefing.

Corona passports will not only be used to document vaccination against the virus, but also a recent negative test, which will be a requirement to use a number of services once they reopen.

READ ALSO: How will Denmark use ‘corona passports’ in post-restriction reality?

Waiting times for tests can nevertheless be expected at certain points, for example at scheduled reopening dates and prior to public holidays, when larger number of people will be likely to seek tests.

Hækkerup called for the public to be patient and ensure they receive a test when necessary, even if it involves queuing.

A total of 516 test sites are currently in operation in Denmark, meaning no point in the country is currently more than 20 kilometres from the nearest testing facility, Lisbet Zilmer-Johns, the director of the relevant national agency, Styrelsen for Forsyningssikkerhed, said at the briefing.

Last week saw 1.1 million tests for the coronavirus conducted in the country, almost double the 572,000 in the first week of the year.

The government has said that a high level of testing plays a role in its strategy for keeping the pandemic under control in Denmark as the country reopens.

Prime Minister Mette Frederiksen suggested last month that people in Denmark would be likely to be required to take a test twice weekly once the country lifted its lockdown. That is not the strategy currently, however, Hækkerup said on Thursday.

A decline in demand for PCR testing for Covid-19 is behind health authorities’ decision to further reduce capacity from 20,000 to 10,000 tests per day.

The Agency for Critical Supplies (Styrelsen for Forsyningssikkerhed) confirmed the change in a statement on Friday.

The reduction is part of the government’s Covid-19 testing strategy for the rest of 2022 and the first three months of 2023.

Testing capacity can be ramped up again should case numbers go up after August 15th, the critical supplies agency said.

From August 15th, all tasks related to the national Covid-19 testing programme come under the auspices of the Ministry of Health.

The Danish Health Authority said on its website that it expects the coronavirus to become a seasonal infection similar to influenza.

“We must expect many to be infected with Covid-19 during the autumn and winter,” the authority writes.