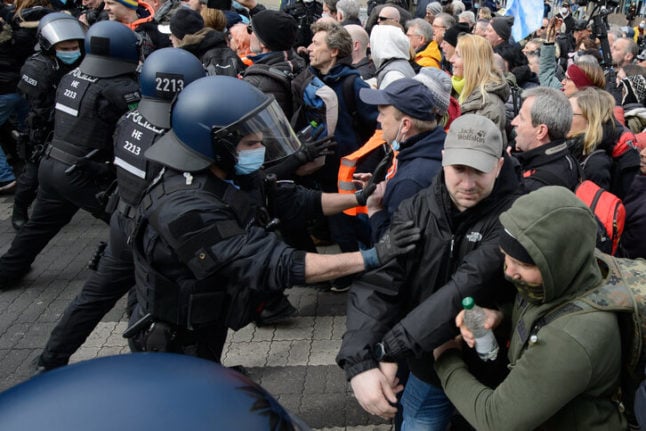 Several thousand people gathered at the main protest site on a square in the city centre, packed closely together without wearing face masks, an AFP reporter saw.

Scuffles erupted when a group of demonstrators tried to break through a police cordon to join up with other protesters, resulting in shoving and prompting officers to use pepper spray.

“This is not what a peaceful protest looks like,” North Hesse police tweeted.

Officers had used “pepper spray and batons” against protesters, police said, adding that there had been “repeated attacks” against emergency service workers.

“We don’t tolerate such attacks,” they wrote, saying they had water cannon on stand by.

The protest was called by the “Querdenker” or Lateral Thinkers movement, an umbrella group that has organised some of Germany’s largest “anti-corona” demonstrations since the start of the pandemic.

The movement has drawn in people from the far-left, conspiracy theorists, anti-vaxxers and right-wing extremists.

Some of them don’t believe the pandemic is real, while others claim the curbs imposed to rein in the coronavirus infringe on their civil rights.

Some demonstrators in Kassel held up signs that read “End the lockdown” and “Corona rebels”, or carried heart-shaped balloons.

Many also waved “Querdenker” flags from different parts of the country, suggesting people had travelled to join the rally.

The founder of the Querdenker movement, Michael Ballweg, in late December urged supporters to halt their protests until the spring.

The Kassel protest’s organisers had registered for up to 6,000 participants.

The protests come as Germany is battling a sharp rise in infection rates in the third wave of the pandemic despite months of shutdowns.

The country recorded another 16,000 new cases on Saturday and a further 207 deaths, according to the Robert Koch Institute for infectious diseases.

Chancellor Angela Merkel and the leaders of Germany’s 16 federal states are meeting on Monday to discuss the next steps, with Merkel warning there could be no further easing of restrictions.

Schools began reopening in Germany at the end of February, followed by some shops and cultural centres in March. But indoor dining and many other leisure activities remains banned.