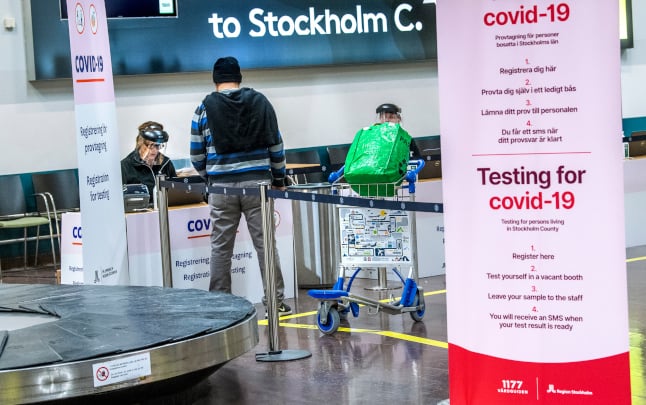 A Covid-19 test station at Arlanda Airport (foreign travellers not covered by one of the exemptions have to get tested before arriving in Sweden however). Photo: Claudio Bresciani/TT

The rules were introduced to curb the spread of the coronavirus variant first discovered in the UK, after a number of cases were found in Denmark and Norway.

When The Local asked the Public Health Agency’s state epidemiologist Anders Tegnell on Tuesday whether it was still reasonable to keep the extra travel rules for the UK, Denmark and Norway in place now that the variant is widespread in Sweden, he said:

“We have a continuing discussion about that with our foreign ministry, who are the ones having these regulations in place. Unfortunately it is not only the UK variant that makes us concerned about travel between different countries, there are also other variants out there. But we might adapt, in collaboration with the foreign ministry, there might be some adaptations to those [travel rules] later on this month.”

It is in fact Sweden’s interior ministry, not the foreign ministry, that decides on border restrictions for foreign travellers. Interior Minister Mikael Damberg told Swedish public radio that the government would now look at the Public Health Agency’s request and make a decision.

Under the Public Health Agency’s proposals, travellers from Denmark and Norway would just like other EU/EEA countries have to show a negative Covid-19 test on the border, unless they are exempted (for example if they can prove they live in Sweden).

The radio report did not mention what would happen to the current entry ban for travellers from the UK or non-EU countries, which is also currently set to expire on March 31st (but could be extended, as has happened several times in the past year).