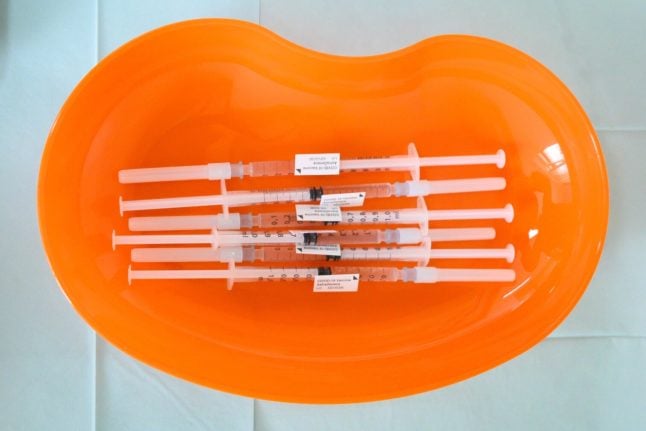 “After new reports of thromboses of the cerebral veins in connection with the vaccination in Germany and Europe, the PEI considers further investigations to be necessary,” said the German health ministry, referring to a recommendation by the country’s vaccine authority, the Paul Ehrlich Institute.

“The European Medicines Agency EMA will decide whether and how the new findings will affect the approval of the vaccine,” it added.

Spahn explained that the suspension was a “purely precautionary measure” and added that he expected a decision on the safety of the vaccine to be made by the European Medicines Agency within the next week.

Seven cases of cerebral vein thrombosis had been reported, Spahn said, and while this is a “very low risk” compared to the 1.6 million jabs already given in the country, it would be above average if confirmed to be linked to the vaccine.

“This was a scientific decision and not a political one. In making it we have followed the advice of the Paul Ehrlich Institute,” Spahn said.

He also confirmed that the suspension affected both first and second doses with the vaccine, adding that second doses could be given after the European Medicine Agency had reviewed the concerns over blood clots.

Several European countries, including Ireland and the Netherlands, have suspended usage of the shots, which were jointly developed with the University of Oxford.

Both the British-Swedish company and Oxford have said there was no link between their vaccine and blood clotting.

The World Health Organization, Europe’s medicines watchdog, governments and experts have stressed that no causal link has been established between the vaccine and blood clotting and insisted that the vaccine is safe.

An AstraZeneca spokesman said it had found no evidence of increased risk of blood clot conditions after analysing reported cases from more than 17 million doses.

“In fact, the reported numbers of these types of events for COVID-19 Vaccine AstraZeneca are lower than the number that would have occurred naturally in the unvaccinated population,” said the spokesman.

Norwegian health officials reported three more cases of blood clots or brain haemorrhages in younger people who received the AstraZeneca Covid-19 jab, but said they could not yet say they were vaccine-related.

READ MORE: Why have tens of thousands of Germany’s AstraZeneca vaccines not been used?

The Norwegian Medicines Agency said similar incidents had been reported in other European countries. While there was no proof of a link to the vaccine, anyone under 50 who felt unwell and developed large blue patches after vaccination should seek medical attention.

The World Health Organization said no causal link had been established between the vaccine and blood clotting after Denmark, Norway and Iceland on Thursday temporarily suspended the use of the vaccine over concerns about patients developing post-jab blood clots.

A number of other countries have also suspended use of vaccines from one batch.

The manufacturer and Europe’s medicines watchdog have meanwhile insisted that the vaccine is safe.

Denmark was first to announce its suspension, although it stressed that the move was precautionary, and that “it has not been determined, at the time being, that there is a link between the vaccine and the blood clots”.

On Saturday, the Norwegian Medicines Agency said it had “received several adverse event reports about younger vaccinated people with bleeding under the skin (tiny dots and /or larger blue patches) after coronavirus vaccination.

“This is serious and can be a sign of reduced blood platelet counts,” it said.

“Today, we received three more reports of severe cases of blood clots or brain haemorrhages in younger people who have received the AstraZeneca vaccine. These are now receiving hospital treatment,” it added

Geir Bukholm, director of Infection Control and Environmental Health at the Norwegian Institute of Public Health, said that following the decision to suspend the jab, it was now “the Norwegian Medicines Agency’s role to follow up on these suspected side effects and take the necessary measures”.