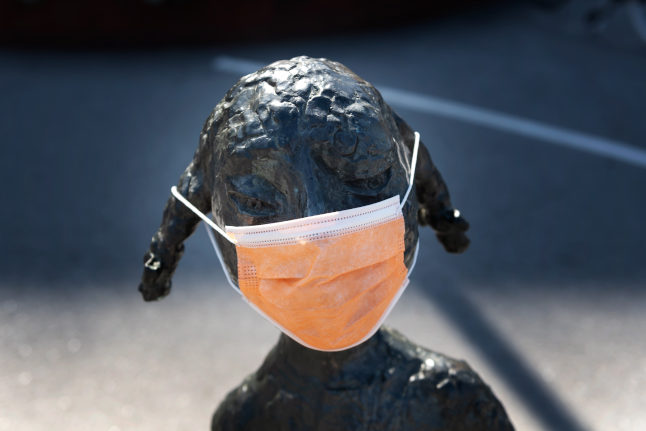 A spokesperson for Sweden’s National Agency for Education (Skolverket) made the comments in an interview with public broadcaster SVT, after The Local first reported on the story of Linus, 13, who was sent home from school after he declined to remove his face mask.

Linus’ mother Sarah Jefford told The Local at the time that her son decided to wear a face mask when he returned to classes at the British International School Stockholm (BISS) in Danderyd, outside Stockholm, after the school had been temporarily closed following a local coronavirus outbreak in which more than 30 staff and students were infected, as well as over the annual school sports break.

“I decided to wear a mask to school. The first lesson [goes] fine with it on. But then in the beginning of lesson two, the teacher asks me to take my mask off, and I of course say that I didn’t want to because of the coronavirus,” he wrote in an email forwarded to The Local.

Linus said he was then made to wait isolated in a room for three hours before his mother, Sarah Jefford, was able to pick him up.

“I was fuming,” she said. “I am deeply shocked by these measures and find it unacceptable. It should be a matter of choice. I don’t think one should be prevented from wearing a mask.”

SVT on Sunday also published an interview with Jefford and Linus, and spoke with Skolverket who said that Sweden’s Education Act does not give schools the legal right to send students home for wearing, or not wearing, a face mask.

“The only situation really where you can send a student home is if the principal decides on suspension, if that option is needed to secure other students’ safety and studies,” a Skolverket spokesperson told SVT.

Linus stayed at home between Monday and Wednesday last week before deciding, along with his parents, that the damage from missing school was worse than the risk of not wearing a mask, and returning to school without one on Thursday.

Carl Hudson, the school’s headmaster, explained in an emailed statement to The Local that although the school could not comment on individual cases, on the subject of masks, it followed the advice of the Stockholm region’s infectious diseases unit, Smittskydd Stockholm.

“In the current recommendations from Smittskydd Stockholm it is explicitly stated that they do not recommend masks in the classroom environment at the moment,” he said.

“As we interpret it, it is their assessment that, at the moment, the benefit of masks, which they recommend elsewhere, is not large enough to outweigh the downside of reduced learning and communication in the classroom.”

A mother has told The Local her 13-year-old son was banned from attending classes at an international school in the Stockholm region until he agreed to remove the mask he was wearing. She is now complaining to the local municipality. https://t.co/0UDuQcvIIc

Stockholm’s regional coronavirus recommendations currently include using face masks on public transport at all times, as well as in situations where close contact can’t be avoided, for example in the workplace, hairdressing salons, pharmacies or the supermarket.

It does not however extend to schools. “At school it remains the case that face masks are only recommended in the specific situation where you, as an adult, cannot maintain distance for an extended period of time. In general, the use of face masks is not recommended in school environments,” the region said in a press statement as it called for masks to be used on public transport.

The Public Health Agency does not advise against face masks for children in its guidelines, but states: “Children do not need to wear face masks. It is difficult for children to handle and wear face masks the right way, and children are not the drivers [of infection] in this epidemic and do not spread infection in the same way as adults.”