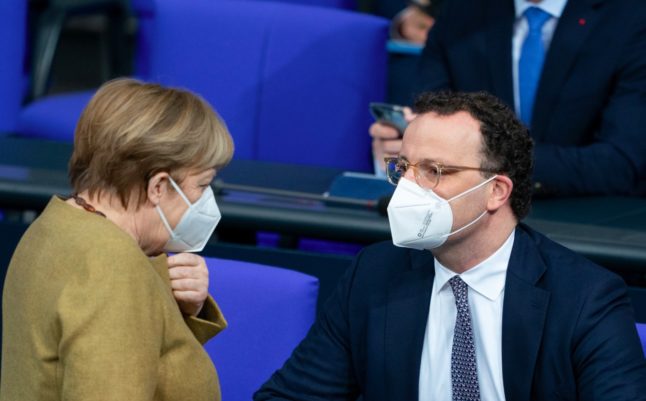 Support for Merkel’s CDU/CSU alliance has fallen to a one-year low at around 30 percent, surveys show, as Germans sour on its pandemic crisis management.

“The corona bonus of the largest ruling party is melting away,” said the topselling Bild daily.

Merkel’s centre-right Christian Democrats and their Bavarian CSU sister party are bracing for a drubbing on Sunday, when voters in Rhineland-Palatinate and Baden-Württemberg states choose new regional parliaments.

Both ballots are seen as the first test of the national mood in what media have dubbed a “super election year” of several regional votes and a general election on September 26 – the first in over 15 years that will not feature Merkel.

Germany’s ruling coalition, made up of the CDU/CSU and their junior partner the Social Democrats (SPD), won praise for taming the first Covid-19 wave last spring, when the nation rallied behind former scientist Merkel’s virus measures.

Merkel’s own popularity soared and support for the conservatives jumped to almost 40 percent.

But a Covid resurgence in late 2020 proved more difficult to suppress. Frustration has grown after months of wearying shutdowns, and the country’s 16 federal states have increasingly gone their own way, leading to a patchwork of rules.

A scandal over the procurement of face masks early on in the pandemic has added to a toxic mix for the conservatives.

A CDU lawmaker and another from the CSU were forced to resign in recent days following accusations they pocketed hundreds of thousands of euros for acting as middlemen in mask contracts.

The apparent profiting from a crisis has triggered widespread outrage, giving the SPD and opposition parties ample ammunition ahead of Sunday’s polls.

In a move aimed at cleaning house, the CDU/CSU alliance has ordered all of its MPs to declare any financial benefits gained from the pandemic by Friday evening.

On Thursday, a third conservative MP stepped down, this time over accusations he received payments from foreign governments such as Azerbaijan’s to lobby for them.

The revelations come on top of mounting public anger over the sluggish pace of Germany’s Covid vaccinations, held up by distribution problems and red tape.

After a delayed start, the offer officially started this week but pharmacies and doctors say the rollout has been chaotic and they have insufficient tests and capacity to meet demand.

READ ALSO: How (and where) to get a free rapid Covid-19 test in Berlin

Influential news weekly Der Spiegel has called for Spahn to resign, while other commentators say the pandemic missteps could tarnish Merkel’s legacy when she bows out later this year.

The far-right, anti-Islam AfD is one of the parties that stands to benefit from the troubles roiling Merkel’s camp.

But voters could be turned off by the domestic intelligence agency’s plan to start monitoring the AfD for posing a threat to democracy.

Most closely watched will be the vote in Baden-Württemberg, the only German state to have a premier from the Green party.

The Greens there currently govern in coalition with the CDU, in what could serve as a blueprint for the next national government.

READ ALSO: What you need to know about Germany’s face mask scandal

The left-leaning ecologists are leading opinion polls in the affluent south-western state, and have also seen their popularity rise nationally since the 2017 general election on growing concern about climate change.

In Rhineland-Palatinate, the CDU and the centre-left SPD are neck-and-neck.

“No one needs such an affair in the final metres of an election campaign,” he said.